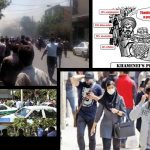 Written by Jennifer Jones-Kelley on June 16, 2020. Posted in NEWS

MEK Iran: During the past few weeks, people from every walks of life in several cities held protest against economic injustices and human rights abuses.

Protests have resumed in cities across Iran, as widespread dissatisfaction about the regime’s corruption deepens, and fear of the coronavirus is outweighed by simmering resentment over economic and social issues.

On Sunday, June 14, investors from regime-backed credit firms rallied outside the Central Bank in Tehran to demand the return of their savings. The protesters’ investments were devalued as a result of a new exchange rate negotiated between the Central Bank and businesses, many of which are controlled by the Revolutionary Guards (IRGC). The protesters cite “inefficiency and embezzlement” within the NIMA [Consolidated System of Forex Transactions] as the cause of their losses.

This protest marks the latest grievance by investors in the regime’s credit firms. Other investors are still demanding the return of their savings after regime-backed credit firms declared bankruptcy and refused to return investors’ savings.

MEK sources inside Iran report that anti-riot forces were deployed to the rally to prevent the protest from spreading.

In Dayyer, Bushehr Province, dhow owners, and sailors gathered at the port where their boats were being held to protest restrictions against unloading their goods and leaving the port. Protesters held a sign that read, “We want nothing but the right to work and provide food for our families.”

Kindergarten teachers and part-time teachers traveled from provinces across Iran to protest in front of the Ministry of Education building in Tehran. The teachers said that they have been left in limbo and demanded answers about their job status. The protesters held signs showing the provinces they had traveled from to be at the rally, according to MEK sources.

In Ahvaz, Khuzestan Province, municipal workers gathered outside the Karun Municipality to demand payment of their delayed wages and pensions from the contractor who employs them.

Angry vehicle buyers gathered outside of the Ministry of Industries, Mining, and Trade in Tehran to protest a decision in favor of the Azvico company. The protesters pre-purchased Azvico MG360 vehicles, but the cars were never delivered. Protesters say that 5,000 families were swindled by the company, which reports indicate resulted in $200 million being routed out of Iran.

Regime officials have expressed concern about how the public will respond in the aftermath of the coronavirus pandemic. On Saturday, June 13, Mohammad Reza Mahboub-Far, a member of the National COVID-19 Task Force, worried that the regime’s mismanagement of the crisis could lead to another uprising.

Protests across #Iran as regime officials voice concerns of a new uprisinghttps://t.co/svBXz50rBH

In an interview with the state-run Jahan-e San’at daily, he said: “The country’s economic and financial conditions during the novel coronavirus era are showing a social impact inside our society. Honor killings and a series of suicides across the country are just a small portion of COVID-19’s social consequences.”

“Most of these issues can soon lead to protests similar to those of 2017 and 2019 and expand across the country in a far more violent nature. If there were four provinces in utterly poor economic conditions back in early 2019, this time around nearly the entire country will be facing financial and economic crises,” Mahboub-Far warned.