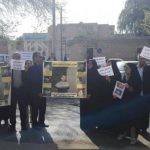 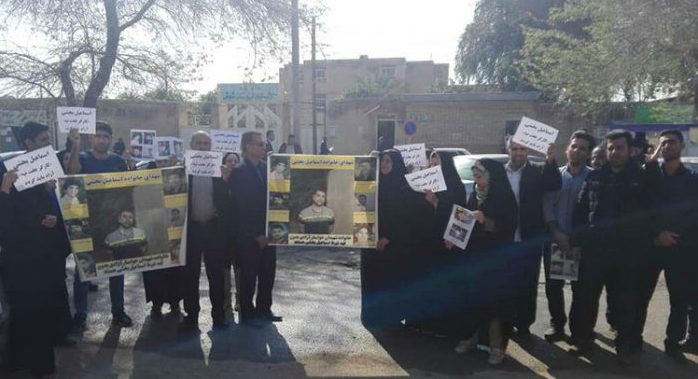 Photo credit to INW: Families of the Haft-Tappeh sugarcane factory protest Esmail Bakhshi’s arrest, for protesting their unpaid wages and the working condition at the factory.

On Monday, looted clients of the Caspian Credit Institute gathered outside of the company’s offices in Rasht, northern Iran, to demand the return of their stolen savings. Caspian, which is affiliated with the Revolutionary Guards, declared bankruptcy and emptied the accounts of its clients after making a series of false promises to lure investors.

In Khorasan Razavi Province, looted customers of the Badre Tous Company, which is affiliated with the Caspian Credit Institute, protested outside of the governorate and demanded that their stolen money he returned.

On Monday, scammed credit customers of the Shadi Goldsmith in Tehran protested outside of the Supreme Court. The protesters were scammed when they sold gold to Shadi and didn’t receive their full share of the profits. Shadi has scammed over 4,000 people over the 19 years it has operated in Tehran.

In the Chabahar Municipality of Sistan and Baluchestan Province, workers gathered outside of the municipality to protest several months of delayed paychecks.

In the town of Abadan, southern Iran, municipal workers, and firefighters held two rallies in protest of three months of delayed paychecks. The firefighters also protested the fact that they had not been provided uniforms for the past two years and that their trucks were poorly equipped and lacked necessary safety tools.

In Tehran, employees of government subsidy plan Equity Shares gathered outside of the Ministry of Economy for two consecutive days to demand 48 months of unpaid wages. Protesters also complained that the company did not offer any job security, even after twelve years of employment.

Also in Tehran, retirees of the Foundation of Martyrs and Veterans Affairs rallied outside of the foundation’s offices to protest the delay of their pension bonuses and severance packages. The protesters retired two years ago and have still not received the promised benefits from their employer, nor have they received any response to their demands.

In Karaj, employees and workers from Khomeini Hospital rallied for two consecutive days to demand months of unpaid and delayed wages.

On Monday, law students gathered outside of the Iranian regime Parliament in Tehran to protest the low acceptance rate for the 2018 Bar exams.

Family and Colleagues of Political Prisoner

Also on Monday, jailed labor activist Esmail Bakhshi’s family and many of his colleagues from the Haft Tappeh Sugarcane factory in Shush, Khuzestan Province, gathered outside of the judiciary in Shush to demand his release.

Bakshi was initially arrested for participating in the Haft Tappeh Sugarcane Factory worker strikes last year but was later released along with a number of other arrested workers. He was re-arrested on January 21st after publicly stating that he was tortured while in regime custody.

The MEK was vocal in its support of the factory workers during the Haft Tappeh strikes and active on the ground with its Resistance Units. The MEK and the Iranian Resistance continues to support Mr. Bakshi and calls on regime authorities to release him and drop the charges against him.

On Monday, the families of the victims of a deadly plane crash rallied at the Mehr Abad Airport in Tehran on the second anniversary of the tragedy. All 66 passengers were killed on the fatal flight. Family members are still waiting for a proper investigation into what went wrong on the flight.