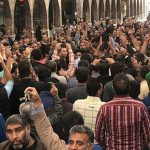 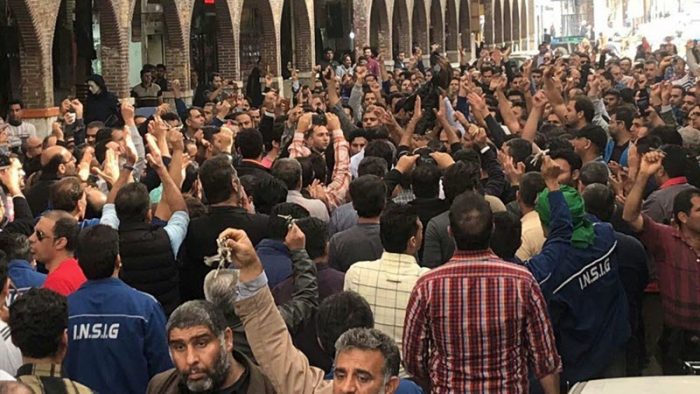 Archive Photo-The second week of protest by Ahvaz Steelworkers against the repressive regime.

On Sunday, January 6th, Hassan Mahmoudi penned a piece for tsarism exploring the leaders of the Iranian protest movement. The piece, entitled ‘Who is Leading and Organizing the Iranian Strikes’, looked at the escalating protest movement in Iran and the driving forces behind the expanding opposition movement.

Mahmoudi began, “over the past 12 months, a single week hasn’t passed where some sort of protest and demonstration has not taken place somewhere in the country.”

He describes how dissent and public fury has seeped across Iranian industries, bringing truckers, market stall owners, teachers, sugar workers, steelworkers, and farmers into the streets in protest. “Virtually every Iranian group and community has expressed its discontent with the current political structure,” Mahmoudi says.

#Iran
The farmers of Varzaneh, Isfahan, continued their protests on Friday, chanting slogans against Rouhani and other regime officials for continuously reneging on their promises to solve the province's water shortage problems.#IranProtests https://t.co/wbV93cuUjk

Their grievances have been wide-ranging, but several themes have reared their heads in the Iranian workforce time and time again; corruption, economic mismanagement, unpaid wages, inflation, and reduced Iranian purchasing power.

In typical regime fashion, the mullahs have responded to the growing protests with violence and repression. Most recently, Esmail Bakshi, one of the labor activists arrested in Shush during the strikes carried out by the Haft Tappeh sugarcane workforce, endured extensive physical and psychological torture in regime custody. His injuries were so severe he had to be transferred to hospital.

At a protest among farmers in Isfahan on January 2nd, regime agents used tear gas and fired live rounds in the air in an attempt to disperse the crowds, and earlier in the year, when Iran’s truck drivers were striking, the regime threatened them with imprisonment and even execution.

While many regime officials still dismiss the protest organizers as “opportunists and anti-revolutionaries who want to take advantage of political turmoil inside the country,” there has been an increasing acceptance among the regime’s leadership of the reality that the Iranian opposition is a well-organized political force.

Today, the regime’s existence is in danger more than any other time. #Iran’s society is more prepared than ever. But it is your will that is going to determine how the present volatile situation will evolve into the overthrow of the mullahs’ dictatorship#FreeIran pic.twitter.com/adc7pOssWj

Members of Parliament like Naser Mousavi Larijani are beginning to point the finger at the People’s Mojahedin Organisation of Iran (PMOI / MEK), and the group is increasingly receiving coverage from the Iranian state-run media outlets.

The MEK has been relentless in their organization of protests. They publish details of protests through their social media outlets and have been putting up posters across the country.

The group has an abundance of resistance units, from Tehran to Mashhad, Kermanshah, and Ahvaz. Many draw attention to the opulence that the regime leadership enjoys while much of the Iranian population struggles to put food on the table.

Mahmoudi quoted the prominent Iranian political scientist Dr. Behrouz Puyan in his article. Puyan said, “with conditions inside Iran and abroad changing dramatically, the MEK implemented its new strategy of launching resistance units,” he added, “by organizing and leading the Iranian uprising in an effective manner, resistance units are injecting a new life in the society and protestors on the streets.”