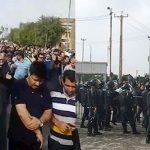 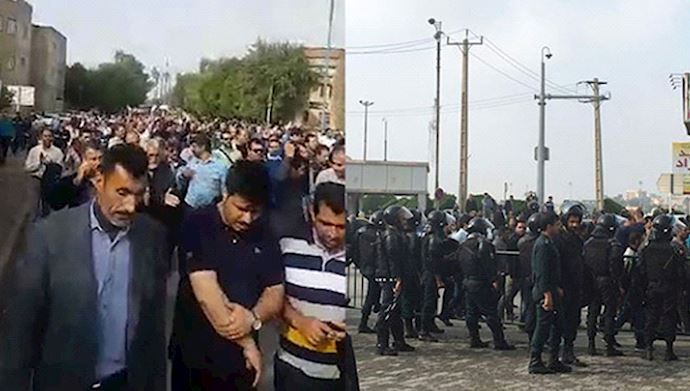 The Ahvaz Steel workers protest against the lack of payment and regime’s repressive measure against protesting workers.

Following the arrest and torture of a number of their colleagues, the Iran National Steel Industrial Group (INSIG) released a statement condemning the brutal acts of violence and aggression carried out at the behest of the Iranian regime.

In their statement, the workers lamented that their once-thriving factory in Ahvaz had been reduced to little more than a military base where regime agents summoned and threatened activists at their whim.

@IranHrm
Mohammad Ali Jedari Forooghi, the attorney of arrested steelworkers of Ahvaz Steel Company said there are still seven workers in prison. After the continuous protests of the Steelworkers in Ahvaz, #Iran 43 workers were arrested on several occasions. #HumanRights pic.twitter.com/FohESNEUHf

The group said that since 2016, it has witnessed despicable threatening behavior by regime security authorities, including, “arrests, prison, torture and preventing our colleagues from coming to work”.

The statement also highlighted the defiance and determination Iran’s brave steelworkers possessed to keep turning out to protest in the face of such aggression. The statement maintained that “these events haven’t prevented the noble workers of National Industrial Steel Group from pursuing their rights.”

The statement went on to accuse the regime of deliberately trying to shutter the group by deliberately placing military personnel in the factory and “gradually transforming INSIG from a production facility into a military base under the control of security and judiciary institutions.”

INSIG is Iran’s largest producer and exporter of steel and employs a significant portion of the Ahvaz workforce.

In recent months, this workforce has laid down their tools and left their place of work in a display of anger over unpaid wages, decreased workers’ rights, limited job security, and corruption amongst the company management.

The workers have referred to the company director and his allies as “the mafia” due to their extensive network of corruption and greed with little regard for the hardworking workforce that depends on the company for their livelihood.

Support from Across Iran

The steelworkers’ protests drew attention from across the Iranian population. Students in Tehran pledged their support to the workers, as did the Iranian opposition and the People’s Mujahedin Organisation of Iran (MEK).

The President-elect of the Iranian opposition, Maryam Rajavi, mentioned the brave workers in her recent speech at a conference on December 15th. She said, “the brave steel workers of Ahvaz have incited more resistance and protests across the country.”

Out of fear that the steelworkers’ protest would spread to other segments of the Iranian population, the regime administered a violent crackdown against the striking INSIG workers.

Regime agents raided the properties of known protestors during the night and carted them off to prison where they face torture and inhumane conditions.

The INSIG statement read, “seven of our colleagues are still in prison. Meanwhile, authorities continue to summon and imprison more workers.”

They expressed their dismay but indicated that they would use the incidents to channel their anger and fuel their determination for further protests. “At first glance, it might seem that after our street protests were halted, our justice-seeking voices have been stifled. But rest assured that this isn’t the end of our struggle against tyranny and injustice and the mafia. By drawing lessons from the past and using the experience we’ve earned, we will soon return in full force.”