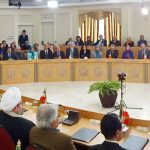 The National Council of Resistance of Iran (NCRI)- Iranian regime’s most organized opposition, and the only viable alternative to the ruling dictatorship in Iran.

The National Council of Resistance of Iran (NCRI) is a broad coalition of democratic Iranian resistance groups and organizations founded by Iranian Resistance leader Massoud Rajavi in Tehran in 1981. The NCRI’s mission is to bring freedom and democracy to Iran.

The NCRI stands ready to establish a democratic and secular republic in Iran, based on the separation of Mosque and State. In the meantime, the NCRI operates as a parliament-in-exile with more than 500 members. Representatives include ethnic and religious minorities, such as Kurds, Baluchis, Armenians, Jews and Zoroastrians, and people from a broad spectrum of political ideologies. 50 percent of the NCRI’s members are women, and women make up half of the organization’s leadership. Five organizations are represented within the NCRI, including the Mujahedin-e Khalq (MEK), the largest and most popular resistance organization in Iran.

MEP Anthea McIntyre in the EU Parliament conference:
There is a democratic alternative to this regime. It is led by #MaryamRajavi and her ten-point plan. Many members of the EU Parliament support her.#NoImpunity4Mullahs #FreeIran pic.twitter.com/LSjcuJSqYH

The NCRI is governed by a set of guiding principles, which are explained below:

Each member of the NCRI has one vote. Decisions are made with a simple majority vote.

After the ruling Iranian regime is overthrown, the NCRI’s 25 committees will step in as the provisional coalition government. Each committee is chaired by a prominent and well-qualified political figure. The provisional government will remain in power for six months while democratic elections are held. Its main functions are to hold free elections for a National Legislative and Constituent Assembly, to ensure that those elections are fair, and to peacefully transfer power to the elected representatives of the people of Iran.

Mrs. Maryam Rajavi is the President-elect of the NCRI. Her role is to preside over the provisional government during the peaceful transition of power to the Iranian people until a democratic government is in place.

Did you know:
25yrs ago this day,in its plenary session,#NCRI,the democratic coalition of #Iranian opposition orgs. &prominent personalities, elected @Maryam_Rajavi as the President-elect 4the transitional period after the mullahs’ overthrow.#freeIran https://t.co/SvZFPUaHHO pic.twitter.com/mp5yTt19LS

In November 2002, the NCRI adopted a plan to overthrow the clerical regime ruling Iran. The National Solidarity Front was described by Mrs. Rajavi as

“a reflection of the most profound democratic yearnings of all the people of Iran, regardless of ideology, belief, religion and ethnicity that transcends all partisan and political interests,” adding that the Front “embodies the unshakable resolve of the Iranian people to overthrow the mullahs’ inhuman regime.”

The National Solidarity Front will include all Iranians who want to overthrow the regime in favor of a secular republic.

The NCRI supports national capitalism, the market economy, private ownership, and private investment. It believes that utilizing scientific and technological advances is essential to creating and maintaining a healthy economy, and it considers relations with the industrialized world as integral to the reconstruction of the Iranian economy.

The NCRI is committed to the separation of Church and State. Its members have ratified a platform stating that “all forms of discrimination against the followers of various religions and denominations in the enjoyment of their individual and social rights are prohibited. No citizen shall enjoy any privileges or be subject to any deprivations with respect to a nomination for election, suffrage, employment, education, becoming a judge or any other individual or social rights, for reason of belief or non-belief in a particular religion or denomination.”

The NCRI affirms the rights of all ethnic and national minorities. It believes that Iranian Kurdistan should be autonomous and has adopted a plan to make this a reality. The NCRI’s platform specifies that “the administration of all the affairs of the autonomous region of Kurdistan,” except for those related to foreign policy, national defense, national security, foreign trade, and customs, “falls within the authority of the autonomous institutions.”

The NCRI’s foreign policy is based on independence, respect for and adherence to the United Nations Charter and international conventions and treaties, good relationships with neighboring countries, and regional and international non-interference in the internal affairs of other countries.

The NCRI supports the ongoing work toward peace in the Middle East and is deeply committed to promoting and protecting peace and tranquillity in the region. It condemns any act of aggression or expansionism in the Middle East, and it opposes nuclear proliferation and the production of ballistic missiles and weapons of mass destruction.