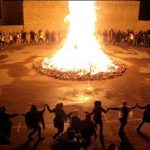 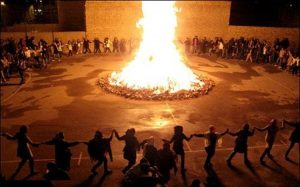 Protesters Seek Change in Iran During Fire Fest Demonstrations-Photo ArchiveProtests erupted in Iran on Tuesday as people across the country rose up to protest the mullahs’ rule.

Demonstrations were staged in cities across Iran to take place during the yearly Fire Fest celebration, which marks the last week of Iran’s calendar year. A network within Iran associated with the People’s Mojahedin Organization of Iran (PMOI/MEK) issued a call for citizens to use the occasion to protest the ruling regime, and the people heeded the call to action.

The Persian Festival of Fire, or Chaharshanbe Suri, has long been the subject of the mullahs’ ire, as it predates Islamic rule, with the ruling regime attempting to prevent public gatherings for the celebration.

The Fire Fest combines the mullahs’ disdain for cultural celebrations with their fear of free assembly by the Iranian people. Clashes between the government and its people are common during cultural celebrations, and the backlash was severe this year, with the recent uprisings fresh on everyone’s minds.

Since the uprising beginning in December of 2017, the mullahs have been increasingly fearful of further public demonstration. The authorities claimed that people were free to celebrate their cultural traditions as long as they did not pose a threat to public order, but the dissident organization PMOI/MEK reported that the ruling regime dispatched Revolutionary Guard-controlled civilian militias to municipalities across Iran in advance of Chaharshanbe Suri in a failed attempt to quash another uprising.

The previous large-scale uprising was only quelled after 50 protesters were killed and 8,000 more were arrested, according to the National Council of Resistance of Iran (NCRI).

The December 2017/January 2018 uprising began as a protest against the economic plight of Iranians but soon spread to a call for regime change. That call was echoed in Tuesday’s protests. The backlash to the demonstrations was swift and severe, with many protesters detained or injured. Those who were detained will be held until the end of Nowruz, the Iranian New Year.

The West has become more aware of the growing unrest in Iran and is working toward measures to support Iran’s people. In the U.S. the Trump administration is becoming receptive to the movement and could help by targeting the Central Bank and the Revolutionary Guard. Europe can strengthen its current efforts to curb Iran’s ballistic weapons program and focus on Tehran’s record of human rights abuses to hasten change in Iran.

The oppressive theocratic regime in Iran is harmful to everyone who allows it to continue. Iran’s opposition seeks to create a free and democratic society in which all people are valued. This is a goal that all people can support.