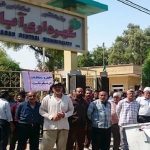 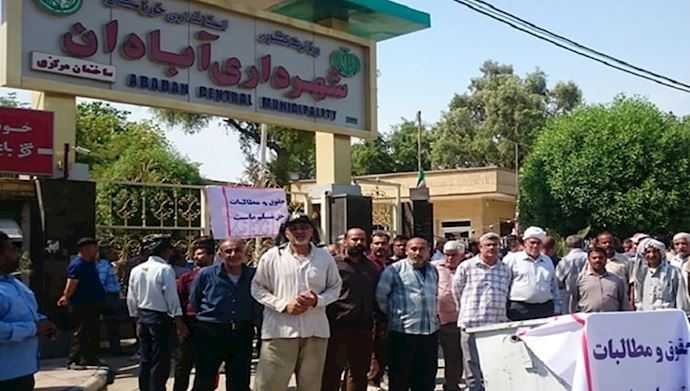 Protest by municipality workers over their unpaid wages

Customers that had purchased vehicles from Bahman Khodro gathered outside the company’s headquarters in Tehran on Sunday, January 13th, reports by the MEK network said. They had all handed over their money, but none had yet received their purchased vehicles.

Bahman Khodro is a subsidiary company of the Bahman Group, a company joined-owned by a number of Iranian investment companies with close ties to the ruling regime. One of the Bahman Group’s largest shareholders, Mehr-e Eqtesad Financial is an investment arm of the Mehr Eqtesad Bank which was recently on the receiving end of US sanctions over its involvement in financing the Islamic Revolutionary Guards Corps (IRGC) and Quds Force terrorist plots.

Another Bahman Group shareholder, Ghadir Investment Company, was also sanctioned due to its close financial relationship with the Iranian regime.

As angry customers protested in Tehran, simultaneous protests erupted in Shadegan and Abadan. In Shadegan, Khuzestan province, municipal workers gathered to protest their unpaid wages. Many of the city’s workers have not received a paycheck in more than eight months and have had to seek alternative means of employment to ensure their family’s survival.

In Abadan, also in Khuzestan province, municipal workers also gathered to protest their unpaid wages. The workers of Abadan have reportedly now gone three months without receiving a paycheck.

Elsewhere, in Yasuj, customers of the Bank-e Ayandeh (Future Bank) gathered outside the bank’s Yasuj branch demanding their deposits. There have been increasing reports that the bank has gone bankrupt, which led to protests outside branches across the country as panicked investors demanded their money.

Although the Iranian Central Bank has denied Bank-e Ayandeh’s bankruptcy via state-run media outlets, this has done little to ease public concerns.

Customers remember the events of 2017 that led to thousands of Iranian investors and bank customers losing their deposits after state-backed financial institutions engaged in fraudulent behavior to trick the public out of money.

As customers fear of losing their savings once more, calls for Bank-e Ayandeh to return customer deposits are increasing.

Whether or not the Iranian public will receive their funds remains to be seen. But the protests sweeping across Iran once more are indicative of the surging influence of the Iranian opposition heading into 2019.

Protests among the Iranian public are showing no sign of letting up as the Iranian regime continues to weaken. Many in the opposition movement are predicting 2019 will be a pivotal year for the Iranian resistance. All indications so far support this conclusion.