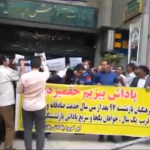 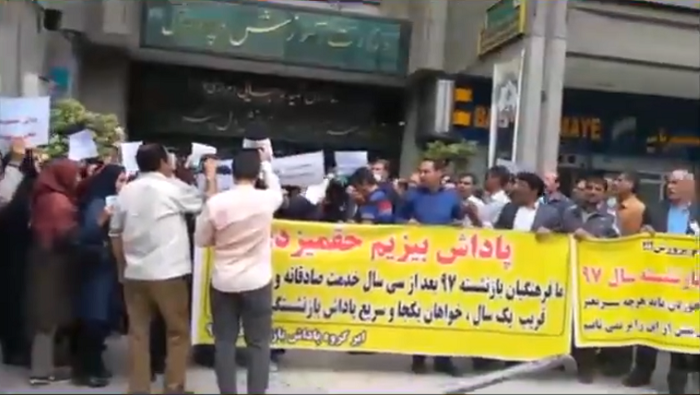 Iranian teachers take it to the street again, protesting low and unpaid wages. A large group of retired teachers demonstrate in front of Iran’s Ministry of Education-May 21, 2019

On Tuesday, May 21st, a group of retired teachers gathered in front of the Ministry of Education building in Tehran to protest the regime’s failure to respond to their grave economic concerns.

The protesting retirees held banners and signs reading, “The result of 30 years of hard working should be paid as quickly as possible, and we cannot accept this cunctation [delay].”

In videos shared on social media, the protesting retirees were heard chanting, “We will not be silent until getting our rights!”

#IranProtests May 21
Retired Iranian teachers protesting outside the Ministry of Education in #Tehran to their low pension.
Chanting:" We will not be silent until getting our rights' pic.twitter.com/6ioE8dh18N

Many retired teachers complain that their pensions have not been paid on time, causing them an undue economic burden. The teachers cited regime embezzlement and corruption as the root cause of their delayed pensions.

The retired teachers have also repeatedly protested their low pensions, with some protesters saying that their paychecks only cover the costs of the first ten days of the month.

Over the past year, retired teachers and other pensioners have held a number of rallies and demonstrations in protest of low wages, poor benefits, and delayed paychecks. The regime has refused to respond to any of their demands.

The problem of low wages is not limited to retirees. Currently, 80% of the Iranian population lives below the poverty line. The minimum wage places the average family of four at 50% of the poverty level, and the problem is growing.

According to ISNA state-run News Agency, “Article 41 of the Iranian Labor Law states that the minimum wage shall be sufficient to meet the living expenses of a family and should take into account the inflation rate announced by the Central Bank.”

Even those earning well above the minimum wage fall below the poverty line. The formerly robust middle-class in Iran has all but disappeared, leaving only those with ties to the regime and its entities with wealth.

Compounding the problem is the fact that workers from many sectors of society are often not paid for months at a time. Those who go on strike to protest working without pay are subject to threats and intimidation by the regime.

Last fall, the MEK reported extensively on the months-long strikes by the Haft Tappeh Sugar Mill workers in Shush. In December, the striking sugar factory workers were arrested in the dead of night in a series of violent midnight raids on workers’ homes. Some workers slept on the streets out of fear that they would be targeted. At least two of the strike organizers were tortured while in custody.

The oppressive Iranian regime has responded to the economic crises of its own making by punishing the victims of its corruption and mismanagement for speaking up and ignoring their suffering. This pattern will not change until the people rise up and overthrow their oppressors.