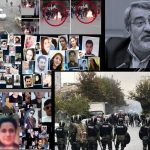 Written by Mohsen Aboutalebi on June 3, 2020. Posted in NEWS

MEK Iran: Three officials said that during November, around 1,500 people had been killed.

For many years, the people of Iran have despised the mullahs that rule their country. They have watched the regime suppress their rights and plunder their nation’s wealth. The country has been engulfed in a series of crises in which the people always come off worse. It is no wonder that there have been several nationwide uprisings in the past few years.

The latest one started last November. It started in just a few cities but very quickly spread across the whole country. The regime lost control and ordered a massive crackdown on the people. Many were very badly injured, many were killed because of the sheer brutality of the suppressive forces and many more were arrested. The regime’s reaction was horrifying and the violence on the part of the authorities was astounding.

#Iran: Even the regime’s own claims of killing over 200 people show how brutally the regime’s forces suppressed the protesters and underline the need for the international community to intervene and condemn the regime. #HumanRights #IranProtestshttps://t.co/56MhlHWZsb

During an interview on state TV a few days ago, the Interior Minister of Iran, Abdolreza Rahmani-Fazli, admitted that more than 200 people were killed in the November 2019 uprising. He also implied that many of the deaths were not caused by the regime’s forces, saying that a fifth of the deaths was caused by non-standard weapons.

He has grossly understated the number of people that were killed and injured, giving a figure that is just a fraction of the reality. The People’s Mojahedin Organization of Iran (PMOI / MEK Iran), the main opposition to the Iranian regime, reported that more than a thousand people were killed. The Interior Minister has dismissed these figures, saying the opposition, or “enemy” as he described them, is exaggerating and has been trying to instigate a civil war.

However, we know that the regime routinely under-reports on statistics in an attempt to downplay crises. The regime’s statistics are nothing more than figures plucked from thin air in attempts to make crises look less serious than they really are.

The latest example of this is the Coronavirus outbreak. The (PMOI / MEK Iran) knew that the regime was going to try to cover up the extent of the outbreak, so it has been compiling independent statistics to get a better reflection of reality. And the regime has done as expected. It is reporting a death toll that is only a fraction of what the (PMOI / MEK Iran) is reporting.

Regarding the 2019 uprising, the Interior Minister also said that the opposition took the huge increase in fuel prices as a reason to instigate an uprising, saying that the enemy wants to cause instability and insecurity in Iran to replicate the war in Syria. He said that this is why the regime has been “maintaining security”.

It has already been acknowledged by some in the regime that the 20 billion was the tip of the iceberg when it comes to what Iran has lent Assad during the Syrian civil war. https://t.co/5SDpLba3tA#Iran #Syria #MEK #Corona @USAdarFarsi pic.twitter.com/fMvjZ9mfBp

The death toll the Interior Minister is stating is a contradiction of figures that several Interior Ministry officials gave back in December. Three officials said that in the space of just two weeks during November, around 1,500 people had been killed during the period of unrest. These figures had reportedly been gathered from a number of sources including that of the security forces themselves, plus hospitals, coroner’s offices, and morgues.