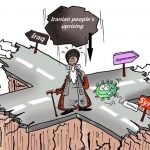 Despite COVID-19, Iranian Regime Paves the Way for Further Crises 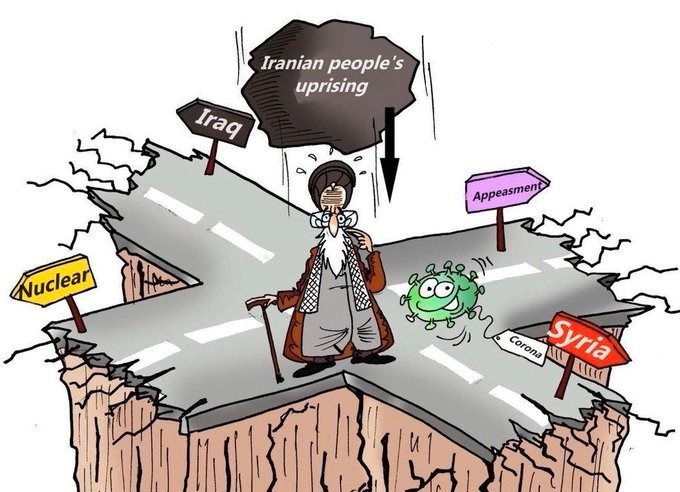 Mullah’s regime is surrounded by a much deep crisis.

The Iranian regime usually responds to any crisis by creating a greater one. During the Iran-Iraq war, they said they were willing to continue the war even if it took  20 years.

Throughout Iranian people’s uprisings in 2018 and 2019, the answer was nothing but repression and expansion of Islamic Revolutionary Guards Corps (IRGC)’s military bases inside Iran and warmongering policy and export of terrorism and extremism to the region. Instead of helping people get through the COVID-19 crisis, the regime sees the disease outbreak as an “opportunity and blessing.”

The coronavirus that has affected all countries has various effects and consequences. Increasing good cooperation and collaboration, strengthening collective and health approaches, strengthening social solidarity, and dynamizing the spirit of sacrifice in many countries are some of the positive consequences of this virus in most parts of the world.

Iran’s crisis is far different from other countries

The Iranian regime pursues to push the international community into lifting sanctions by exploiting the coronavirus crisis. In other words, the mullahs have captured the people of Iran between their oppressive policies and the deadly virus. The weekly Sobheh-e Sadegh reported about “wide exercises of 54,000 paramilitary Basij bases across the country.” The Revolutionary Guard Corps (IRGC) endeavors to boost its suppressive power by militarizing the health sector and holding military maneuvers. In the November 2019 uprising, more than 200 Iranian cities witnessed an uprising where people chanted “down with Rouhani” and “down with Khamenei.”

Despite international sanctions, the Iranian regime has significant revenue and huge currency reserves. In last year’s budget, the mullahs spent $55 billion of $120 billion for defensive, military interventions and supporting their terrorist allies in Iraq, Syria, Lebanon, as well as their ballistic missile projects. While this money could have been spent on improving the situation for Iranian citizens, but clearly, the regime has other obligations abroad.

A website run by the #Iranian state, predicted that the shares of Shasta, the Social Security Investment Company – would be listed on the Tehran Stock exchange two days later.https://t.co/qqSQvKaWp4#MEK #Covid_19 #COVID19 @USAdarFarsi pic.twitter.com/OMhaMOnnmN

An example was the trip of Ali Shamkhani, Secretary of the Supreme Security Council, to Iraq to suppress the Iraqi people’s protests. He met with Mostafa Kazemi and new Quds Force commander Esmail Ghaani, that replaced Qassem Soleimani, who was killed by a U.S. drone last January and went later by a Mahan Air flight to Iraqi Mobilization Forces base in the south of Iraq.

Sam Dubberley, Head of Evidence Lab of Amnesty International, revealed in an interview with Al-Arabia TV on March 28 that:

“Teargas M651 used to suppress the Iraqi people’s uprising is produced by Defense Industries Organization of the Iranian regime.”

According to media statistics, on average, the regime’s proxy forces Fatemioun’s members’ monthly salary is about 1500 dollars. The regime spends every year more than 120M dollars to pay these mercenaries. In six years, the system has spent about $8.640 billion to pay Fatemioun. Excluded regime’s expenses of warmongering and missile program, only with this amount of money 160 hospitals with thousands of beds could have been built.

In forty years, the most important achievement of the regime is the export of terrorism and expansion of its warmongering policy through its executive arm, the Quds Force, by taking advantage of the country’s wealth and oil revenues.

The IRGCN vessels repeatedly crossed the bows and sterns of the U.S. vessels at extremely close range and high speeds, including multiple crossings of the Puller with a 50-yard nearest point of approach (CPA) and within 10 yards of Maui’s bow.

“Iran is the largest state sponsor of terrorism worldwide, and the long arm of Iranian malfeasance is felt everywhere around the world. We see it day in and day out with the misery that their terrorist-supporting government deals on places like Yemen and Syria and elsewhere. So, to set the conditions that with Iran anything is possible. We know there are significant – Iran’s surrogate, Lebanese Hizballah, has numerous connections to this region of the world, both through the diaspora and through financial links.We know that in recent times there’s been an uptick in Iranian activities, including Quds Force, in Venezuela. Therefore, we continue to watch closely any Iranian malign activity and the connections to all the other instability and insecurity that we see. “

By warmongering and increasing tensions in the Persian Gulf, the mullahs try to maintain their existence since they have no other choice but to create a new crisis to solve internal problems. The mentioned issues are taking place while the regime is losing Iranian people’s trust, and continuous protests due to economic obstacles are proof of this situation.

Crushed by sanctions and economic backwardness and corruption in its entire system, the Iranian regime is facing an emergency health condition. The regime leaders believe they are engulfed in crisis more than before, so due to their theocratic structure and lack of historical consistency, they seek a new crisis.

“Just one of the many fatal flaws of the JCPOA. Imagine agreeing to lift U.N. sanctions so the regime in Iran can buy heavy weaponry including fighter jets, warships, battle tanks, and attack helicopters,” referred Mark Dubowitz, head of Foundation of Defense of Democracies in a tweet on April 19 to U.N. sanction status within six months.

What is happening? The world must know as long as the Mullahs’ regime is in power; the crisis will continue. The policy of regime change is a severe considerable option. Iran’s well organized and capable resistance, the National Council of Resistance of Iran (NCRI) headed by Mrs. Maryam Rajavi, and the main opposition force PMOI/MEK Iran, believe this scenario is real and possible. This option must be supported.