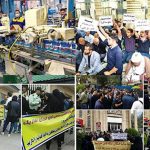 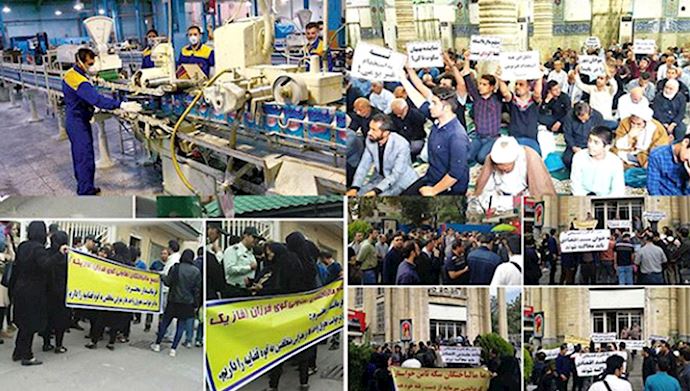 The protests in Iran continues over the high corruption, human rights abuse and the repressive measures the government is taking in response to the legitimate calls for change.

A rising wave of protests has swept across Iran in response to the snowballing crises overtaking the Iranian regime. Reports from MEK’s network inside Iran indicate new protests and strikes arise each day among every sector of Iranian society as the ongoing uprising against the corrupt and incompetent regime reach a fever pitch.

The time has come for the world community to stand by the people of Iran in their uprising against the religious fascist regime ruling #Iran and recognize their determination to achieve regime change and freedom.#ExpelIranDiplomatTerrorists https://t.co/yc8oSrxOtQ pic.twitter.com/IiAjJ5oiRe

Firefighters in Shadegan gathered outside of the Khuzestan’s governate office to demand an increase in pay. The protesters represented 300 firefighters who have not been paid in nine months.

Protests escalate in #Iran as people seek answers to their demands.#IranProtestshttps://t.co/84epL7srE7

In Behbahan, youth protested again against unemployment at the Friday prayer site. The protesters rallied because authorities are hiring non-locals to work at the nearby refinery while the town’s youth are left without jobs.

Iran’s truck drivers finally forced the regime to concede to three of their demands after three weeks of continuous strikes. This is the third strike by Iranian truckers this year. The striking drivers, who have received international support from trade unions, have been subjected to mass arrests and threats of execution by the regime.

Clients of the Caspian credit firm gathered outside of the regime’s Central Bank in Tehran to demand the return of their looted money by the Revolutionary Guards-linked financial institution.

During the rally, the protesters chanted: “The bankrupt government is sitting on our money!”

In the city of Rasht, plundered clients of the Caspian credit union gathered in front of the Caspian branch in a downpour of rain to demand the return of their sacongs.

“Our life’s work has been stolen and plundered!”

“We’ll continue our protests until our money is returned!”

“Our money has been stolen and we can’t put food on the table!”

In Tehran, clients of the Kuye Farzan credit company gathered outside the mayor’s office to protest. They held a banner that read, “We are requesting houses and criminals to be handed over to the judiciary.”

Also in Tehran, clients of the Sekeye Thaman credit company gathered in front of the public prosecutor’s office to demand that their stolen savings be returned to them.

Qazvin, northwest #Iran
Work in the Tuli Press factory has come to a standstill.
370 workers have lost their jobs. pic.twitter.com/RU2xosxbFZ

On Monday, municipality workers in Shushtar rallied outside of city hall to demand their paychecks that have been delayed for the past six months, due to a privatization measure that the employees did not agree to.

On Monday, students at Sanandaj Open University in western Iran protested the decision by officials to eliminate the field of nursing one week into courses.

Factory workers in the Albroz Industrial Complex in Qazvin Province held a rally to protest the withholding of their pensions for the past 14 months.

Nationwide strikes by Iran’s teachers have spread to 103 cities, according to the most recent reports, and continued for their second day on Monday.

The nationwide strikes began on Sunday to protest low pay and benefits, inability to form labor unions, failure of the regime to implement agreed-upon policies, and poor learning environments for students.

Teachers have also demanded the release of their imprisoned colleagues.

Students in a number of cities have voiced their support for their striking teachers.

Strikes have become a popular means of protest since the massive anti-regime uprising began in Iran last December. Iranians from every social class and sector of society have joined together in raising their voices against the mullahs’ regime, with thousands taking to the street to protest and many closing their shops and refusing to enter their places of business. The MEK works each day to organize these diverse groups of people in their shared goal of overthrowing the corrupt regime and bringing democracy back to Iran.