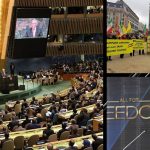 MEK Iran: Discussions on Iran at the UN General Assembly Should Concentrate on Human Rights

Written by Mohsen Aboutalebi on August 21, 2020. Posted in MEK (PMOI) IN MEDIA, NEWS

MEK: People around the world including Iran look with hope to western democracies who they think have the power to stop human rights abuses and the stoppable tragedies that affect so many families.

Alejo Vidal Quadras, a professor of atomic and nuclear physics, who is President of the International Committee In Search of Justice (ISJ) recently wrote this abridged article for The National Council of Resistance of Iran (NCR).

He stated that Iran is likely to be a key country for discussion at the coming United Nations General Assembly, but there is uncertainty what sort of decisions, if any, are likely to be made. This is because both European and the United States governments have turned a blind eye to some of Iran’s policies while focusing more on arms embargos and Iran’s nuclear capability.

What has been constantly overlooked has been the human rights abuses that have been taking place over many years in the country. People around the world including Iran look with hope to western democracies who they think have the power to stop human rights abuses and the stoppable tragedies that affect so many families.

Quadras says if human rights abuses aren’t condemned by western democracies it is basically giving the go-ahead for them to continue unchecked. Also, in the case of Iran, it gives it the chance to commit more domestic abuses while the world focuses only on the dire consequences of its nuclear capabilities and on their own domestic problems.

Meanwhile, more protests against the regime take place, with more crackdowns and executions but the western world just ignores what is going on. They haven’t even noticed the fatal shooting of 1,500 peaceful protesters in November of last year (It is worth mentioning that the main Iranian opposition the PMOI / MEK Iran had already revealed the figures and names of martyrs during Iran protests last November). Even in the prisons, protesters are held and tortured, denied medical attention, and sentenced to the death penalty for chanting the phrase ‘’death to the dictator.’’

The Death Commissions of the summer of 1988

These were initiated by the Iranian judiciary and were given the task to find those who would not give up their allegiance and support for the Iranian Resistance. When found they were executed and after a few months the death toll surpassed 30,000 and the victims included pregnant women and young children. At that time Iranian expatriates tried to raise awareness throughout the world about the indiscriminate killings, but other things took precedence. It has always been difficult to pursue charges against perpetrators of this massacre in the International Criminal Court.

Quadras believes that as the General Assembly offers democratic nations the chance to speak, it will be too late for the Iranian people if a message isn’t sent to the regime condemning its actions against its people. More unrest is going to take place in light of the devastating impact of COVID-19 (The People’s Mojahedin Organization of Iran PMOI / MEK Iran announced on Thursday, August 20, 2020, that the Coronavirus fatalities across Iran are, more than 91,700), and this will lead to more crackdowns and human rights abuses as the people try to defend their democratic rights. Also, Tehran will keep up its conflicts with the west and there will be no solution to either the arms embargo or the nuclear issue.

Quadras concludes by saying that there are both practical and moral reasons for pursuing real justice for those who committed the unforgettable crimes of the massacres in 1988. The regime has been able to benefit itself since 1988 at the expense of the people and now it is time to end its impunity.