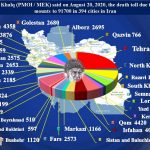 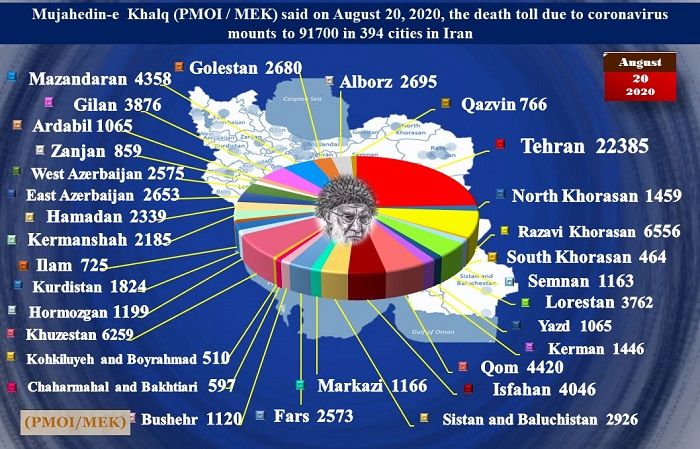 The People’s Mojahedin Organization of Iran (PMOI / MEK Iran), the main opposition to the Iranian regime, has reported that as of Thursday 20th August, more than 91,700 people across Iran have died after contracting COVID-19.

The (PMOI / MEK Iran) has been reporting on the situation because it was clear the regime would try to cover up the extent of the crisis. And it is right to do so because the regime’s official death toll stands at just 20,125 – a fraction of the true figure.

The People’s Mojahedin Organization of Iran (PMOI/#MEK) announced on Thursday, August 20, 2020, that the #Coronavirus fatalities in 394 cities across #Iran are, unfortunately, more than 91,700. #Covid_19
https://t.co/qoC4CfaGGV

Several parts of the country have been classed as red zones where there is a high circulation of the virus and where hospitals are becoming dangerously close to being unable to accept further patients.

Officials in a number of the country’s provinces are warning that medical and personal protection supplies are running very low. Others are also reporting that the price of essentials, including face masks, is rising sharply.

Iranian President Hassan Rouhani, on the other hand, is denying that these reports are true, stating that there is an abundance of hygiene services available to the public, even free of charge. He is also maintaining that the country is dealing with the health crisis well considering the circumstances. Rouhani implied that countries with higher resources are not faring much better.

The evolution of the pandemic is set to continue on a long road ahead. The head of the Coronavirus Task Force in Tehran has indicated that restrictions are going to have to continue over the upcoming months. Alireza Zali said that schools may need to prepare for a limited physical presence, for example. He also spoke about the population density in the country’s capital, explaining that this has an effect on health and treatment systems.

The Tehran province also has the highest number of slum dwellers and a high number of commuters to the city every day.

More than 91,700 people have died of the novel #coronavirus in 394 cities checkered across all of Iran's 31 provinces, according to the Iranian opposition PMOI/MEK.

The dean of the Isfahan Medical Sciences University said that in the previous 24 hours between 100 and 150 new hospitalizations have taken place. Furthermore, during the past five days, there have been approximately 900 people hospitalized. The dean said that there is a high chance of the month of September seeing a further significant increase in the number of people being hospitalized.

He also drew attention to the exhaustion experienced by medical workers, indicating that physicians have not been paid in 14 months and other medical workers for seven. The dean of the university highlighted that the focus must remain on the virus and that medical staff should not be dealing with other pressures.

University entrance exams have also been held, with many candidates nothing that the appropriate safety measures were not implemented as promised. Of course, this means that another surge could come as a result.

The regime’s handling of the pandemic has been shocking. The people have been left extremely vulnerable and the government focused on the economic impact of the virus and the unrest in society that is about to spill over.

The abnormal surging trend of the number of coronavirus victims in Iran is a product of the criminal policies of Khamenei and Rouhani.

The abnormal surging trend of the number of #coronavirus victims in #Iran is a product of the criminal policies of Khamenei and Rouhani. pic.twitter.com/TnCBCiRZEc