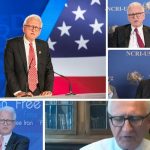 Written by Mohsen Aboutalebi on July 1, 2020. Posted in NEWS 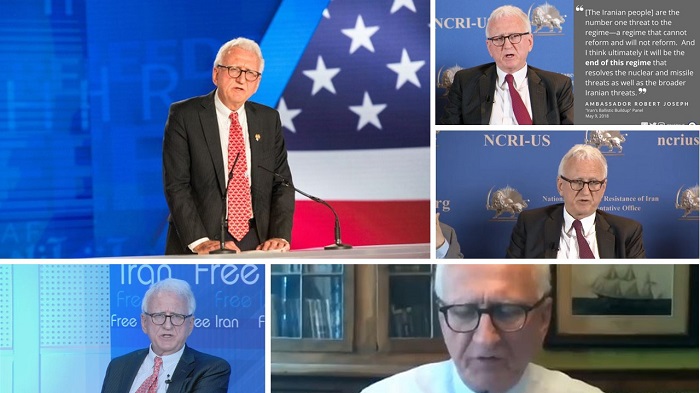 Transcript of remarks by Ambassador Robert G. Joseph, Former Under Secretary of State for Arms Control and International Security, on June 3, 2020 panel organized by the National Council of Resistance of Iran, U.S. Representative Office (NCRI-US) on the growing threat from Iran’s regime.

Let me also thank the organizers of this event for the invitation to participate as a member of the panel.  It’s always a privilege to collaborate with such distinguished professionals.

.@NCRIUS Panel: Undersecretary of State, Amb. Robert Joseph: #Iran regime has executed 100,000 people, including thousands last year. The regime has lost all legitimacy. The US should speak up for the right of #Iranian people for a free and democratic future. pic.twitter.com/VF6oPlDm0J

As you all know, we are in a situation of unprecedented simultaneous crises – a cruel pandemic, a massive economic dislocation, and civil disorder unmatched for over five decades.  While we work to overcome these ongoing multiple challenges, it is essential that we also keep our eye on the national security threats from foreign adversaries that continue to face our nation.

The leaders of China, Russia, and North Korea – likely believing that the U.S. is distracted by internal weaknesses — are all taking actions to consolidate their power internally and expand their influence and presence externally.  There should be no doubt that the opportunistic Mullahs in Teheran will also seek to take advantage of these tragic times to, in the words of Rahm Emanuel:

John and Joe have done a truly excellent job in describing the many threats from Iran – regional aggression and internal interference against its neighbors, including key U.S. allies; support for international terrorism;  the use of proxy forces in Iraq, Yemen, Lebanon and elsewhere; and its buildup of military capabilities to threaten and coerce, especially its ballistic missile arsenal.   And Olli, as always, has done a great job making clear that the regime’s nuclear program continues to be a major concern that could quickly change the political and military dynamic in the region and beyond.

What I would like to do is briefly talk about what I think we should do to meet the full spectrum of threats posed by Iran.  Consistent with Alireza’s opening remarks, I think it is useful – in fact, essential – to distinguish between the regime and the Iranian people.  After all, the people of Iran are the first and foremost victims of the regime.

They have suffered through 40 years of brutal oppression, including the mass executions – more accurately mass murders — of more than a hundred thousand of their citizens.  In the last year alone, thousands have been gunned down in the streets or imprisoned when they dared to seek democracy and an end to the endemic corruption and pervasive incompetence of a regime that has failed its people wherever and whenever in need, whether from massive floods or the coronavirus – an ongoing human tragedy that has taken the lives of tens of thousands, made much worse by leaders who siphon off the wealth of the nation for their gain.

This is a regime that has lost all legitimacy.  It can stay in power only through brute force and the denial of the aspirations of the people for freedom and democracy.  And here, I would say, is the first action that the U.S. can and should take – and that is speaking up for the rights of the people to determine their future.  We know that President Reagan’s public emphasis on human rights gave comfort and hope to the people of the Soviet Union and the captured states of eastern and central Europe.  It was a major factor in the demise of Soviet tyranny.

Robert Joseph: The last thing we want to do is to lavishly provide funds for the regime so that they would fund.#FreeIran #Iran pic.twitter.com/V7aXXaMAnp

President Trump, in stark contrast to his immediate predecessor, has made public statements in support of the Iranian people, for example, telling the rulers in Teheran not to kill those protesting in the streets – an important message that may help to deter those afraid that they may in the future be held accountable for their actions.

But the President has also made clear that he rejects a policy of regime change.  As I understand his position, it means rejection of the use of American military force to overthrow the regime.  On this, I agree 100 percent with the President – we should not go to war to bring down the current religious dictatorship.  But we don’t need to – and as far as I know, no one – at least no serious individual — is advocating that we do so.

Regime change must come from within – from the people of Iran.  We can and should help to accomplish this goal through moral support and the policy of maximum pressure, but it is on the Iranian people to determine their future.  It is their future to be determined by their efforts and their sacrifices.  And they know that.

Without invasion or war, we can still do more to aid regime collapse, a term used by my colleague Mike Makovsky at JINSA.  This can begin with a consistent message of support for the people.  While the President’s remarks have been direct and sound, he has been undercut by other governmental institutions.

One prime example is the Voice of America which, still operated by individuals from the previous administration, has continued to reflect the past policy of appeasement toward the regime.  The bias is so blatant that Brian Hook, the special envoy for Iran and the head of the effort to apply maximum pressure on the regime, has referred to VOA Persian as the voice of the mullahs – passing on Iranian disinformation and propaganda and hiding the many sins of the regime against its people.   This will only end with new leadership at VOA – one that supports the pro-democracy opposition – such as the NCRI – inside and outside of Iran.

Equally important as what we say in our messaging, are the actions we are taking to pressure the regime to change its behavior as Secretary Pompeo outlined in his May 2018 speech at the Heritage Foundation.

Here we must employ all tools of statecraft, which the administration is doing – and doing well.  Diplomacy should be directed at isolating, not appeasing, the regime.  Opting out of the JCPOA was a major blow to the Mullah’s agenda.  The fundamentally flawed nuclear agreement not only failed to close off Iran’s pathways to a nuclear weapon, but it also paved the way for a future nuclear-armed Iran.  In the interim, it provided the regime with billions of dollars that they used to expand their regional aggression, support their terrorist allies, and oppress their citizens.

Other diplomatic measures, and here I would include the designation of the IRGC as a terrorist organization, have also added to the pressure on regime leaders.  These designations should be expanded to include other bad actors such as the MOIS whose agents have orchestrated terrorist plots in Europe and around the globe.

Economic tools, such as trade sanctions, secondary sanctions, and cutting Iran off from the international financial network are currently being effectively employed by the Trump administration – and should be expanded.  Further cuts to Iran’s oil exports should be pursued, as should denial of access to advanced technologies that can be used to further domestic oppression and external aggression.  And, most important, as John has pointed out, the UN-mandated arms embargo currently scheduled to end in October, should be extended indefinitely.  If that fails due to a veto cast in the Security Council, the U.S. should trigger the snapback provision to reinstate the sanctions in light of Iran’s violations of the JCPOA.

President Rouhani has said that regaining access to the international arms market would prove “a huge political success.” Iran must be denied that success for the sake of peace in the region.

Militarily, the U.S. and our allies must ensure the presence of adequate force to deter Iranian aggression and defeat any substantial military moves by the regime.  The President has made clear that he will order a forceful response to significant provocations by the regime.  Unlike the redlines of the previous administration, this one must be enforced if the line is crossed.  The U.S. reputation still suffers from the failure to take meaningful action against Assad in Syria following his use of chemical weapons against his people.

Again, this is not a recommendation to initiate a conflict or go to war.  That is a red herring used by the regime and its stages – those who Lenin would call useful idiots.  But strength is the best means to deter war.  We have seen over and over, starting in 2003 and most recently with the killing of Soleimani, that the best means to back the regime down is to take forceful actions – to stand against aggression by showing both our capability and resolve.

We must be prepared to do this for as long as it takes for the regime to rot from within and for the Iranian people to prevail in their long and determined quest for democracy.

I could go on and on, but I will stop here.  I know our audience is waiting to ask questions and hear again from the other panel members.  Thank you.

As you know, I had the opportunity to visit Camp Ashraf in Albania last year. I took away a good number of observations because the visit was both moving and instructive. Let me give you just two observations that I think are relevant to what you’re saying. The first is that if you go to the camp and you talk to the residents, you can feel the commitment. You can feel the spirit, the dedication of these people to achieve a free Iran.

The spirit I found to be truly amazing because it was positive, and it was optimistic. It wasn’t regretful or revengeful. And these are people who have suffered at the hands of the regime, people who have lost their mothers, their fathers, brothers, their sisters. And yet they’re so dedicated to bringing democracy and freedom to Iran. That is truly moving.

My second observation is I also had the opportunity to witness some concrete things that those residents are doing to achieve the goal of a free Iran. For example, reaching out to the people of Iran with a message of hope, with the message of truth, and also activities that relate to the organization of the resistance inside Iran. And I think the (PMOI / MEK Iran) has been key to the resistance across the nation. And when you visit the camp, when you look at what they’re doing, when you feel the spirit of these people, there is no doubt why the regime brands the NCRI and the (PMOI / MEK Iran) as public enemy number one.

And to me, that’s a badge of honor.