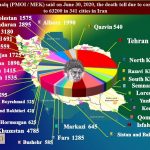 Written by Jennifer Jones-Kelley on July 1, 2020. Posted in NEWS 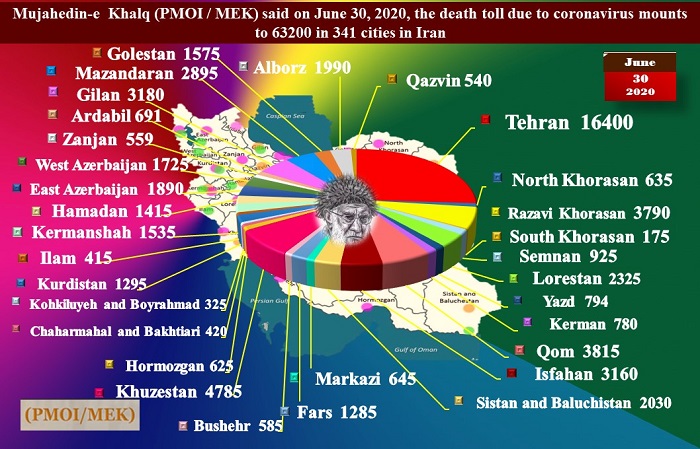 Shortages of personal protective equipment (PPE), according to MEK sources in Iran.

More than 63,200 people in 341 cities in all 31 provinces in Iran have died from COVID-19, the disease caused by the novel coronavirus, since the outbreak was first detected in Iran, according to a Tuesday report from the (PMOI / MEK Iran).

Prominent Iranian physicians report that hospitals in several provinces are at capacity and will soon be unable to accommodate new coronavirus patients. Hospitals are also reporting high numbers of infection among staff and shortages of personal protective equipment (PPE), according to (PMOI / MEK Iran) sources in Iran.

Over 63,200 people have died of the novel #coronavirus in 341 cities checkered across all of #Iran’s 31 provinces, according to reports tallied by the Iranian opposition PMOI/MEK as of Tuesday afternoon local time, June 30.https://t.co/QT1q4i189i

On Monday, the Revolutionary Guards (IRGC)-affiliated Fars news agency quoted National Coronavirus Combat Taskforce (NCCT) head Alireza Zali in a report about the explosion of new coronavirus hospitalizations. “Tehran is still facing an upward curve in the number of COVID-19 infections. During the last 24 hours, no less than 425 new patients were admitted in ordinary wards as well as a further 102 in ICUs of Tehran hospitals,” he said.

The Vice-president of Tehran’s Medical Sciences University addressed the impact of this surge in comments to the official ISNA on Tuesday, saying: “We are practically left with no empty beds in hospitals covered by this University. During the period March 7 to March 12, we had the highest Coronavirus-related hospitalization. If we attain the same level again, which is quite probable, and beyond that, we would no longer be able to respond and cope with it.”

On Monday, a regime Majlis (Parliament) Deputy from Bukan asked for the government to provide assistance so that the people could take life-saving quarantine measures to prevent the spread of the virus. He said, “We are facing many shortages in terms of medicine, medical equipment and treatment, and health resources. Hospitals in the city are full. Bukan’s Qolipour Hospital is full, and there are no beds available for Coronavirus patients. If the government would provide some resources to the people so that they could stay home and lock down their businesses for a month, the spread of the virus will, to a large extent, be prevented, and hospitals would not run into difficulties.”

In Khorasan Razavi, hospitalizations in University-run hospitals in Mashhad reached their highest levels since the beginning of the pandemic, according to the NCCT Secretary Mashhad’s Medical Sciences University. He also stated that the number of people infected in Mashhad has reached its highest level, according to comments made to the Borna news agency.

On Monday, Mehr news agency quoted the Deputy for the Treatment Department at the

Medical Sciences University at Ardebil’s troubling statement about the impending disaster in Ardebil. He said, “The number of hospitalization is on the rise every day, and if this trend continues, hospitals cannot address and respond to those in need.”

#Iran: #Coronavirus Death Toll in 341 Cities Exceeds 63,200
The People’s Mojahedin Organization of Iran (PMOI/MEK) announced on Tuesday, June 30, 2020, that the Coronavirus fatalities in 341 cities across Iran, has surged past 63,200. https://t.co/udo7dzfGqT

On Tuesday, the President of the Medical Sciences University in Shiraz, Fars Province, expressed concern about the toll the coronavirus has taken on healthcare workers in comments to the Tasnim news agency. He said, “In recent weeks more than 400 medical personnel in the Province contracted the virus. Exhaustion among the personnel is very high.”

On Monday, IRNA reported on hospital overcrowding. The report quoted the Director for Malayer Health and Treatment Network in Hamadan Province, who said, “After the holy month of Ramadan, Coronavirus has been on the rise, and if this were to continue, we predict that by July 10, hospitals in the city will be full.”