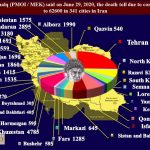 Written by Jennifer Jones-Kelley on June 30, 2020. Posted in NEWS 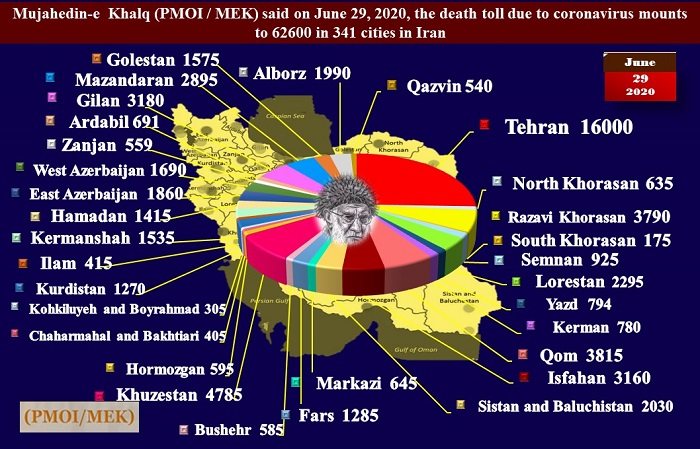 According to the statement from the (PMOI / MEK Iran), the death tolls rise to 62600.

More than 62,600 people in 341 cities in all 31 provinces in Iran have died from the novel coronavirus since the outbreak began in February, according to a Monday statement from the (PMOI / MEK Iran). The Iranian regime confirmed 162 new deaths on Monday, the highest single-day casualty figure since the virus reached Iran. Although the regime’s figures are widely acknowledged to be a serious undercount of the true number of victims, the rising official death toll points to the undeniable impact caused by the regime’s refusal to take adequate precautions to prevent the spread of the deadly virus.

On June 28, the Mehr news agency quoted Mohammad Reza Mahboobfar, a member of the regime’s National Coronavirus Task Force (NTTC), who said, “Three out of ten people in Isfahan carry the virus. With Coronavirus spreading in the country, deaths are on the rise. I can dare say that two people die every 15 minutes (192 in 24 hours) because of this disease.”

In an interview with state television on June 29, NCCT head Alireza Zali expressed concern about the crisis in Tehran. He said, “The figures in Tehran are changing worryingly…For the first time, the number of those hospitalized has surpassed the number of discharged patients.”

Doctors in Lorestan are reporting dangerous conditions in Borujerd and Khorramabad due to the spread of coronavirus, according to MEK sources in Iran. There have been at least 100 coronavirus fatalities in Selseleh and Delfan counties, none of which have been recorded in the regime’s official death toll.

Doctors report that ten percent of nurses have contracted coronavirus, creating a shortage of medical staff. The sick nurses are given 89-day contracts so that they do not qualify for health insurance, leaving them without coverage when they become ill-treating coronavirus patients. Presidents of several University of Medical Sciences have been denied funding to provide personal protective equipment for healthcare workers, making them even more vulnerable. Lorestan may soon be left without any nurses to treat patients.

Conditions in Mashhad, Khorasan Razavi Province are dire. On Monday, the secretary of the Coronavirus Working Group at Mashhad University of Medical Sciences told the state-run IRNA, “The situation in Mashhad has surpassed the red phase. The number of hospitalized patients in this university is more than 600, which is the highest during the Coronavirus outbreak … The daily number of hospitalized patients is reported to be between 120 to 150 people.”

A faculty member at Mashhad University of Medical Sciences also expressed alarm in remarks quoted by the state-run ISNA. He said, “The situation in Mashhad has become similar to March, or even worse. Emergencies and hospital wards are full of Coronavirus patients, to the extent that most medical staff are infected. We are short of medical staff and under pressure.”

On Monday, the Vice-president of Jundishapur University of Medical Sciences in Ahvaz, Khuzestan Province urged officials to reinstate quarantine restrictions.  “Khuzestan has been red since six weeks ago. Given the pressure on the health care system, restrictions must be imposed so that the health system can have a respite,” he said, according to IRNA.

The President of Abadan University of Medical Sciences made similar comments, which were also quoted in the IRNA reporting. He said, “The situation in southwestern Khuzestan is such that if restrictions are not imposed in this area, the number of patients entering the region’s hospitals will be out of control.”

On June 29, the head of the Bandar Abbas City Council expressed frustration with the regime’s response to the pandemic and its continued attempts to cover up the extent of the crisis. In an interview with the state-run ILNA he said, “People are dissatisfied with the decisions of the government … Bandar Abbas is still facing serious problems in providing medical personnel and equipment. Through its cover-up, the government has disregarded the rights of Bander Abbas for making public its information.”

Mrs. Maryam Rajavi is the President-elect of the National Council of Resistance of Iran’s (NCRI): Du to the inhuman policies of Ali Khamenei and Hassan Rouhani, the coronavirus has spread across 341 cities, claiming victims all over Iran.