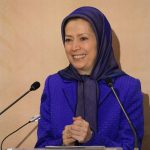 Maryam Rajavi: Terrorism and Warmongering Are the Strategic Means of Iranian Regime’s Survival- Part I 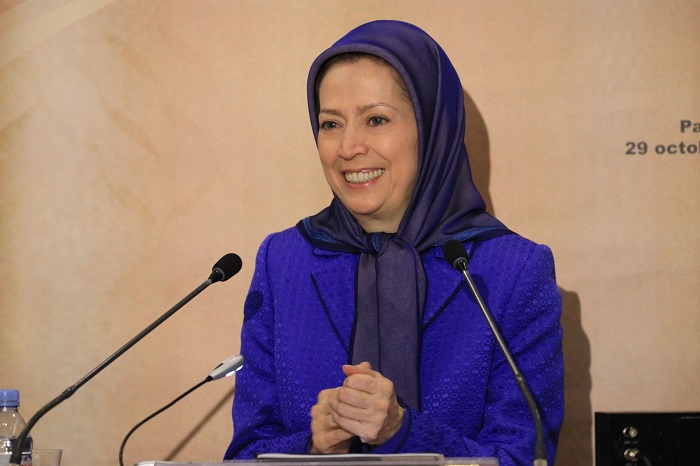 Mrs. Maryam Rajavi, President-elect of the National Council of Resistance of Iran (NCRI), delivers a speech at the French National Assembly on 29 October 2019

In a conference at the French National Assembly on 29 October, Mrs. Maryam Rajavi, the President-elect of the National Council of Resistance of Iran (NCRI), stressed that since Rouhani took office, four thousand death penalties were issued. She said that she hoped Europe and France would stand with the Iranian people and their legitimate demands and aspirations.

In her speech, Mrs. Rajavi first thanked the members of the National Assembly for their invaluable efforts against the mullahs’ religious rule in Iran in support of the Iranian people and their resistance, stressing that these efforts will never be forgotten.

The President-elect of the NCRI first reviewed the human rights’ record in the past four decades in Iran and said:

” The people of Iran have been struggling for more than 40 years against a regime which is the world’s record holder of executions per capita. Since 2013, when Hassan Rouhani became president, some 4,000 people have been executed. And 120,000 political executions have been carried out under the mullahs’ regime since 1981, including the massacre of 30,000 political prisoners in the summer of 1988.”

She then pointed to a new book containing part of the names of massacred MEK members. This book has recently been published by the Call-for-Justice movement.

Mentioning that the 1988 massacre in Iran was the worst state-sponsored massacre since World War II, Mrs. Rajavi said:

” Some of the key perpetrators of this massacre are presently holding positions such as the Head of the Judiciary and the Minister of Justice in Rouhani’s government.

Can you imagine? What kind of justice this is?

This regime has institutionalized discrimination against women in its laws. The highest number of executions of women in the world and their most vicious tortures have been carried out by this regime. Presently, a large number of women are incarcerated in Iran for their peaceful activities or their faith.”

Mrs. Rajavi then discussed the destructive role of the Iranian regime outside Iran and said:

” Outside Iran, the clerical regime is the main cause of instability and wars in the Middle East.

Over the past years, the world has heard a lot about the crimes of ISIS, or Daesh. Their crimes are similar to those committed by the clerical regime in Iran and in the region in the past four decades. They have the same anti-human ideology: dictatorship and savagery under the banner of religion, terrorism, and expansionism, and misogyny. When this ideology dominates a big country like Iran, it becomes a hundred times more dangerous than Daesh, which emerged as a result of the clerical regime’s crimes in Iraq and Syria coupled with international silence.”

Mrs. Rajavi stressed that if inaction vis-à-vis the regime’s crimes in Iran and abroad persists, the clerics and their actions will reproduce groups like Daesh (ISIS). The regime is quite concerned over the latest setback to Daesh.

Regime and Daesh have the same anti-human ideology: in dictatorship and savagery under the banner of religion, in terrorism and expansionism, and in misogyny. #NoImpunity4Mullahs

The regime’s Revolutionary Guards (IRGC) and their militias slaughter people in Iraq, Syria, Lebanon, and Yemen.

Discussing the mullahs’ terrorism and warmongering in Iran, the President-elect of the NCRI said:

” This medieval regime belongs to the past. Terrorism and warmongering are the strategic means of survival. For this reason, they undermined European efforts, including those by the French President to reduce tensions. They continued attacking tankers in international waters and oil installations in neighboring countries.

Why did the regime step up its terrorism and domestic suppression, and refuse the initiatives put forth by France? Because it cannot moderate itself, because the president carries out the whims of the Supreme Leader because the regime’s leaders want to ensure their own survival instead of caring for the interests of the people, and, finally, because the regime lacks the minimum stability.

They are playing a duplicitous game by using these initiatives to buy time and continue their aggression in the region and expand their ballistic missile program. All the while, in their domestic propaganda, they insult France and Europe.

This is what we have experienced in the past 40 years. If this regime had the slightest capacity for reform, we would have not paid such a heavy price in this long and arduous struggle against it.

The Mojahedin quickly learned that the only means for the survival of this theocratic regime are domestic suppression, foreign wars, and crises-making.

The regime understands only the language of firmness. The ruling mullahs consider silence, leniency, and calls for negotiation as signs of weakness.

While they try to make it appear as though Europe needs mediation, they are the ones in need of it. They have been emboldened because of inaction towards their regime’s outlaw behavior and belligerence.”

An exhibition in this regard was on display all day close to the National Assembly.