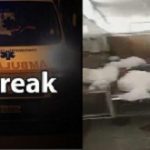 According to the report, regime officials were informed that the virus had reached Iran two weeks before the February 11th anniversary of the 1979 revolution that swept the mullahs into power. Regime leaders chose to conceal the outbreak to boost participation in the pro-regime anniversary march and the Majlis (parliamentary) elections.

A new report from the National Council of Resistance of Iran (NCRI) details the Coronavirus epidemic in Iran and the corruption, deception, and incompetence that have created a public health crisis. The report describes how the regime’s decisions regarding the deadly virus have endangered both the Iranian people and the world from the moment the first case was reported in China to the present day.

The NCRI report states that the reason for the rapid spread of the coronavirus was the cover-up by the Iranian regime. According to the report, regime officials were informed that the virus had reached Iran two weeks before the February 11th anniversary of the 1979 revolution that swept the mullahs into power. Regime leaders chose to conceal the outbreak to boost participation in the pro-regime anniversary march and the Majlis (parliamentary) elections.

The Scope of the Epidemic

The NCRI report argues that the regime has failed to report accurate numbers to world health authorities when providing COVID-19 case data. Iran reported its first two cases on February 19, 2020, and updated those cases to fatalities two hours later. This stands in opposition to other countries who have reported deaths from COVID-19, all of whom have reported their first cases 2-3 weeks before reporting fatalities.

The spread of #Covid_19 throughout #Iran has led to questions about the source of the outbreak. https://t.co/bHCW0Pgsqt#MEK @USAdarFarsi pic.twitter.com/rqU5pzBcsH

In addition, the World Health Organization (WHO) announced on February 28 that at least 97 people infected with COVID-19 had entered 11 countries from Iran, several of whom from cities where the virus had not been reported. At the time, the regime’s Ministry of Health claimed that there were only 245 cases in Iran. The numbers don’t add up.

To further complicate the matter, the reported death rate in Iran is neither comparable to any other country nor is it stable from day to day. The worldwide fatality rate for COVID-19 is 2-3%, but in Iran, the figure has jumped from 12% on February 27th, to 3% on March 5th. This phenomenon is unique to Iran.

As of March 6, 2020, the Iranian regime’s Ministry of Health has reported 4,747 cases of COVID-19 with 124 fatalities. It is painfully clear that these numbers are false.

The MEK announced on March 6th that the death toll from COVID-19 in Iran has now exceeded 1,800. The number could be far higher, and information continues to filter out of the country.

According to the NCRI report, families of the victims have been threatened by the IRGC and Ministry of Intelligence agents and told not to reveal their loved ones’ cause of death. Cardiac arrest is often written on the death certificates as the cause of death to avoid reporting coronavirus.

According to the NCRI report, Qom was identified as the epicenter of the coronavirus epidemic early on, and the spread of the epidemic could have been contained if the regime had quarantined the city or closed its holy shrines. The regime refused to take these precautions, leading to the inevitable spread of the disease.

#Iran is susceptible to becoming the channel in which the #virus spreads to its nearest neighbors https://t.co/UKtl512RSw#MEK #CoronaVirusIran @USAdarFarsi #Covid_19 pic.twitter.com/yqO1lmNA0H

On March 1, 2020, the head of a hospital in Tehran’s Yaftabad said: “If we had limited the travel of people in Qom since the epicenter of the illness is in Qom, the spread would not have been so extensive. You look at the map and you will see that it spread to neighboring provinces from Qom…The (officials) say that they avoided quarantining Qom for economic reasons. This is while the damage that this virus causes is a thousand times more. If we consider economic calculations, the damage will be catastrophic. In fact, our mistake was that when we discovered that the contamination is in the city of Qom, we should have quarantined the people there and prevented its spread. If we had done so, the virus would not have spread. Dr. Abrazadeh (the deputy of Dr. Mohammad Reza Qadir, head of the Qoma medical sciences university) had instructed the closure of the shrine but a number of people refused to close the Masoumeh shrine citing religious reasons.”

Nahid Khodakarami, head of the Health Commission of the Tehran City Council, said on March 1: “Two weeks ago, I told Dr. Iraj Harirchi and even Dr. Nobakht (head of the parliament health committee) that Qom must be quarantined, but they did not listen. There must be restrictions placed on Qom. Now, the entire country has been infected. Even in a small city like Khansar, three people have tested positive for Coronavirus. All three had gone there from Qom. Yesterday, three people traveled from Qom to Tehran and all of them died. If we had not given priority to the concerns of the clerics, we would have been in a much better situation.”

The NCRI report noted that Khamenei’s inner circle opposes closing the shrine of Massumeh. Mohammad Saeedi, On February 22nd, Khamenei’s representative in Qom, said that the “enemy” intends to show that Qom is insecure and take revenge, but “it will never succeed.”

On February 26th, as the epidemic worsened across the country, Saeedi doubled down on his statement, saying, “We consider the holy shrine as a ‘House of cure’ and it must remain open and people must visit the shrine strong.”

Several high-ranking members of his own regime have fallen ill and died since he made that statement, along with countless Iranians whom the regime will not allow being numbered.

The healthcare workers dealing with the crisis are struggling to provide proper care without adequate supplies or staff. Many doctors don’t have medical masks or sanitizer to use on themselves when treating patients with COVID-19. As a result, a number of medical providers have been infected, making it even harder for people to find treatment.

Lack of beds, staff, and equipment have forced doctors to release infected patients, according to the report, and some hospitals don’t even have test kits.

A significant number of regime officials have been sickened with coronavirus, including 23 members of Majlis (parliament), the Deputy Health Minister, the Head of Combatting Coronavirus and advisor to the Judiciary Chief, the Chairman of the Parliamentary Security and Foreign Affairs Committee, and the Vice President, according to the NCRI report.

Several senior officials have died from the virus, including a member of the regime’s Expediency Council, a member of Majlis, an advisor to the Judiciary Chief, among others.

A number of IRGC commanders who traveled to Qom, the epicenter of the epidemic in Iran, for a week of classes, have been quarantined or become ill.

The spread of the Virus beyond Iran’s Borders

According to the NCRI report and statistics from worldwide health officials, the spread of COVID-19 to other countries, including Canada, Australia, New Zealand, United Arab Emirates, Qatar, Lebanon, Iraq, Azerbaijan, Armenia, Oman, Bahrain, Georgia, Pakistan, Afghanistan, and Kuwait, has been directly linked to infected travelers from Iran. Many of these countries traced their first cases to a patient who traveled from Iran before the regime acknowledged the presence of the virus.

Reports from the MEK network indicate that COVID-19 is spreading through Greater Tehran, Rajai-Shahr, Central Karaj, Ghezel Hesar, Urmia, Sheiban, and Kashan prisons. Inmates are housed in overcrowded and unsanitary conditions without access to medical masks or disinfectant. In some prisons, inmates are not provided soap or detergent. Prison officials have failed to isolate infected inmates, causing the virus to spread unchecked throughout the regime’s prisons.