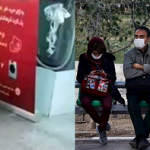 The regime has not only consistently lied about the number of cases that have been registered in the country, but it has also failed to take the necessary preventative measures that would have contributed to containing the outbreak. This has led to many patients being refused the necessary treatment and has also resulted in hundreds of deaths.

Social media is awash with images and videos of people across the country, passed out in buildings or the middle of the street. The images are very poignant, especially those featuring young people and children, and it makes it all the more maddening that the Iranian regime has failed to address the health crisis that threatens millions of people.

The regime has not only consistently lied about the number of cases that have been registered in the country, but it has also failed to take the necessary preventative measures that would have contributed to containing the outbreak. This has led to many patients being refused the necessary treatment and has also resulted in hundreds of deaths (although the Iranian government maintains that there have only been around 116 deaths).

Worryingly, reports from inside the country indicate that many health care professionals have not been provided with adequate medical supplies, including face masks and protective clothing.

It seems that officials in Iran have known about the outbreak of the virus that can be deadly for some for quite some time. However, the regime prioritized the 1979 Revolution rallies that took place in February, trying to boost its morale after months and months of anti-government demonstrations, protests, and strikes.

It also tried to keep quiet about the spread of the virus because it was dealing with dissent regarding the parliamentary elections. Many Iranians had vowed to boycott the sham elections, saying that their vote is for regime change.

The Iranian government has not been completely negligent with regards to the Coronavirus outbreak – some people have been tested and some workplaces have been closed. Unfortunately, it is only those that are part of the regime’s inner circle. But the rest of the citizens of Iran have been entirely neglected, with much secrecy surrounding the deaths. Reports have shown that the regime is preventing families from even receiving updates on their relative’s condition, with many dying and their loved ones still in the dark.

The People’s Mojahedin Organization of Iran (PMOI/MEK), the main opposition to the Iranian regime, has been reporting on the outbreak and it has established that more than 1,800 people have died so far, with the number expected to continue to rise in coming days and weeks.

The #Coronavirus outbreak in #Iran is more than a public health #emergency; it is a flagrant and continuing series of #humanrights abuses. https://t.co/Mn9Hkgd4kI#MEK #COVID19 @USAdarFarsi pic.twitter.com/ciiRGWkWHp

Responding to reports about people passing out in the streets, officials are denying that this is because of the Coronavirus outbreak. Head of the Department of Infectious Diseases at Khomeini Hospital Hamid Emadi Kouchak said that these people are simply “fainting” – something that “can happen to everyone during the day”. Not only are these comments absolutely ridiculous, but they are minimizing the situation and not fooling anyone, not least the people of Iran who know it is not normal to come across so many people “fainting” at one period in time.

The regime’s negligence is criminal and it should not be allowed to get away with these actions that are not only endangering the people of Iran, but also the wider international community.