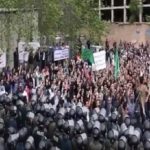 Written by Mohsen Aboutalebi on November 26, 2019. Posted in NEWS 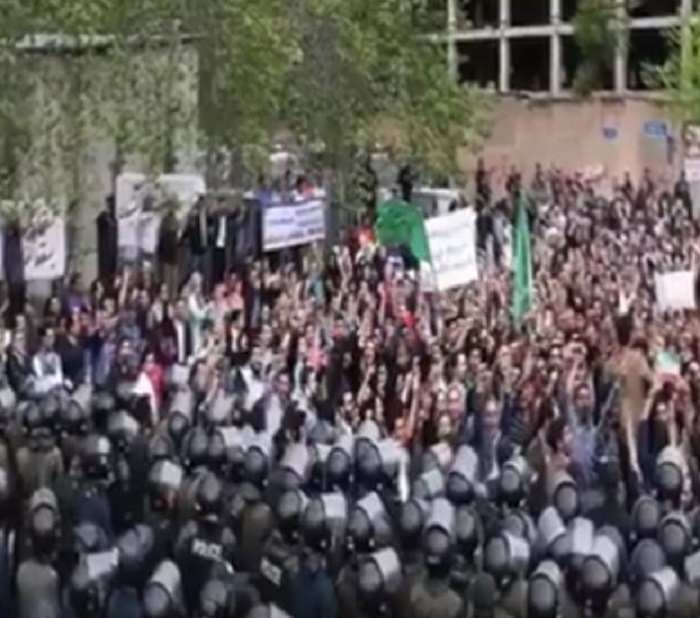 The nationwide uprising in Iran reached its Twelveth consecutive day on Monday, November 25th as people checkered throughout the country continue to protest the corrupt and brutal regime. Authorities in Tehran and a number of other cities have declared martial law to counter the uprising that has occurred in at least 176 cities across Iran.

The Mujahedin-e Khalq (PMOI/MEK) network inside Iran has confirmed at least 450 deaths and 4,000 injuries at the hands of regime authorities. More than 10,000 protesters have been arrested. Netblocks, an organization that tracks Internet connectivity around the world, reports that Internet access is gradually being restored in Iran.

The MEK network received a report from Karaj, west of Tehran, that illustrates the brutality with which the regime’s suppressive forces have cracked down on protesters during the uprisings. A source reported, “Authorities opened immense fire in the Mehrshahr district of Karaj. A 17-year old girl was shot in the head and died. Nearly 15 others were wounded. I don’t know how many were killed. Authorities pressured this girl’s family to remain silent… [Authorities] first shot plastic bullets. Then they started using pellets. Realizing they could not control the crowd, they dispatched a helicopter to this district, and then they started attacking and using live ammunition. A number of people were shot and wounded right before my eyes. Unfortunately, I couldn’t take any footage because I was busy helping the wounded… All the banks in the Mehrshahr district of Karaj have been torched. Most of the banks in the Golshahr district are also destroyed.”

Despite the brutal and bloody crackdown, the protests continue in different cities in #Iran. It is reported that there were demonstrations and clashes last Saturday between protesters and security forces#MEK #IranProtests #FreeIran @USAdarFarsi pic.twitter.com/vev2MAPutK

Protesters are directly calling for the overthrow of the regime in their slogans and are blaming Supreme Leader Ali Khamenei, President Hassan Rouhani and the Islamic Revolutionary Guards Corps (IRGC) for the current crises enveloping Iran.

Protesters in Zanjan, Northwest Iran, held a demonstration on Sunday night and chanted, “No fear! We’re all together!”

The state-run Kayhan daily, which is known as regime Supreme Leader Ali Khamenei’s mouthpiece, recently published an article that estimated monetary damages caused by the uprisings.

According to the article, which cited another state daily, estimated damages are as follow:

These reports from state-run media do not reflect massive damage inflicted on regime offices, police stations, and IRGC bases.

Ruydad 24, a state-run website, published an article on this subject, which the regime has largely tried to avoid mentioning. The Head of the Armed Forces Judicial Organization described the town of Sadra in Central Iran as an example of a community where only one bank was left standing. The article states, “It appears that a helicopter was dispatched to the town of Sadra with a mission to prevent people from taking control over a local IRGC Basij site… Khamenei’s representative in Sadra says, unfortunately, rioters attacked his office in this town on Saturday night (November 16) and torched the site… This office was burning until Sunday morning and all the equipment inside was destroyed.”

For more than ten days, the people of #Iran have been participating in one of the country’s most widespread protests in recent history. #IranProtests #MEK #FreeIran @USAdarFarsi pic.twitter.com/lSP5wQoNUD

Safar Harandi, a member of the regime’s Expediency Council, said: “The rioters appeared in organized groups and carried out similar measures across the country… The rioters had a central command outside of the country and a united mentality.”

Ali Balali, an advisor to the IRGC Aerospace Force commander, justified the regime’s decision to shut down the country’s Internet access, saying, “If the Internet was not shut down riots would have engulfed the country. Up to now, we had not thought about launching a national Internet. We saw what happened to us in the recent [uprising].”

Islamic Revolutionary Guards Corps (IRGC) deputy chief Ali Fadavi attempted to deflect blame for the regime’s brutal response to the protests with outright lies, saying, “The rioters were using small pistols to shoot many people in the abdomen area at point-blank range. They were killing people.” Numerous videos contradict this narrative, with many showing the regime’s forces shooting protesters in the head and chest at point-blank range.

Other regime officials expressed their fears that the MEK had organized the uprising and might have the influence to overthrow the regime. Ali Shamkhani, Secretary of the Iranian regime’s Supreme National Security Council, acknowledged the role of the MEK in the uprising, saying, “I think 34 individuals of the [MEK] have been arrested up to now and a vast network of others who were active not under the banner of the [MEK] but with their train of thought and measures have been identified… These protests are considered a reflection of the truth.”

Mohammad Reza Sabaghian, a former Majlis (parliament) member, also expressed fear that the regime is on unstable ground. “There is no doubt that during these protests the enemies intended to deliver a blow to the state. We should not claim everything is back to normal,” he warned.

Ali Fadavi, deputy chief of the Revolutionary Guards (IRGC), ominously warned, “This was a massive conspiracy. We are aware of the scope of this initiative. We have information that the conspiracy was a large blueprint.”

IRGC chief Hossein Salami described the uprising to his troops as the beginning of a world war, tacitly acknowledging that the rebellion would continue. “Believe me we are in a major world war. Believe me, the war that has begun these days in the streets is a complete global scenario,” he said.