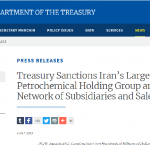 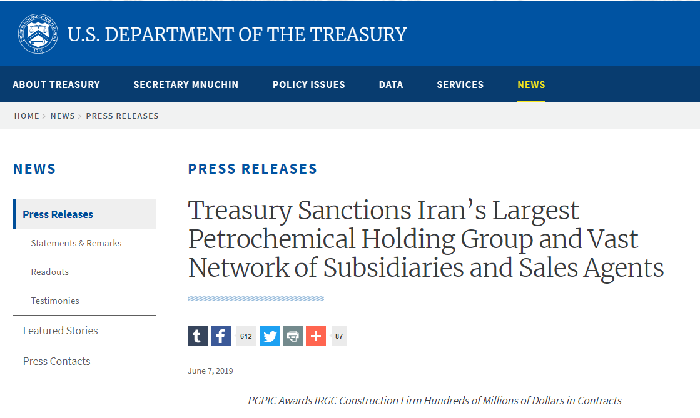 Maximum pressure on #Iran's regime continues today. @USTreasury imposed sanctions on Iran’s petrochemical sector, which funds the IRGC. The U.S. will deny the regime the money it needs to destabilize the Middle East. https://t.co/mUL5rYKYsM

The sanctions follow the U.S. Treasury’s recent designation of the IRGC as a Foreign Terrorist Organization (FTO). Businesses or entities who provide financial or other support to the IRGC are subject to sanctions under the FTO designation.

“By targeting this network we intend to deny funding to key elements of Iran’s petrochemical sector that provide support to the IRGC,” said Treasury Secretary Steven T. Mnuchin. “This action is a warning that we will continue to target holding groups and companies in the petrochemical sector and elsewhere that provide financial lifelines to the IRGC.”

“The IRGC systemically infiltrates critical sectors of the Iranian economy to enrich their coffers, while engaging in a host of other malign activities,” said Under Secretary for Terrorism and Financial Intelligence Sigal Mandelker.

Reactions from the Iranian Resistance

The Iranian Resistance praised the new sanctions against PGPIC and its subsidiaries on social media. Mrs. Maryam Rajavi, President-elect of the National Council of Resistance of Iran (NCRI), affirmed her support for the sanctions, tweeting:

The #IRGC and foundations affiliated with Khamenei, have taken advantage of unique privileges to take hold of the lion’s share of #Iran revenues, including the revenues from oil and petrochemical industries.

“The revenues of the regime’s petrochemical industries end up in Khamenei’s headquarters through a series of double-dealings and duplicities like fake tenders.

“The #IRGC and foundations affiliated with Khamenei, have taken advantage of unique privileges to take hold of the lion’s share of #Iran revenues, including the revenues from oil and petrochemical industries.”

Mohammed Mohaddessin, Chairman of the Foreign Affairs Committee of the NCRI, tweeted:

#Iran’s petrochemical industry has been expropirated by Khamenei and IRGC, revenues used for suppression, export of terror, warmongering. Not one cent is used for people. Iran Resistance has called for sanctions on petrochems for long time.#FreeIran

“#Iran’s petrochemical industry has been expropriated by Khamenei and IRGC, revenues used for suppression, the export of terror, warmongering. Not one cent is used for people. Iran Resistance has called for sanctions on petrochems for long time.

Mohaddessin also stressed that Iran’s wealth should be safeguarded so that it may be returned to the people after they are freed from the ruling regime.

“#Iran rgm should not be allowed financial resources of Iran ppl to suppress them, instigate war & terror. Comprehensive sanctions on oil, petrochemicals, gas is called for. Iran’s wealth should be safeguarded for its people& reconstrucion Iran, after freedom is achieved

The MEK is the largest member of the NCRI.

Cause and Effect of the New Sanctions

The IRGC and its affiliates control 40-50 percent of Iran’s economy, with multi-billion dollar businesses in every major sector. The Iranian regime uses the profits from these businesses to fund its terrorist proxies throughout the Middle East, support its nuclear and ballistic weapons programs, and suppress political dissent within its borders.

PGPIC was specifically targeted for sanctions because of its connection to the IRGC’s engineering arm, Khatam al-Anbiya. PGPIC has awarded major engineering, procurement, and construction contracts to Khatam al-Anbiya, generating hundreds of millions of dollars to multiple IRGC entities in Iran.

The OFAC sanctions will affect numerous companies worldwide who have known business ties with PGPIC and its affiliates. Anyone who continues to do business with PGPIC or any of its subsidiaries or sales agents will be subject to U.S. sanctions.

The goal of the sanctions is to choke off funding from the IRGC to prevent it from carrying out its malign activities.