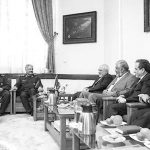 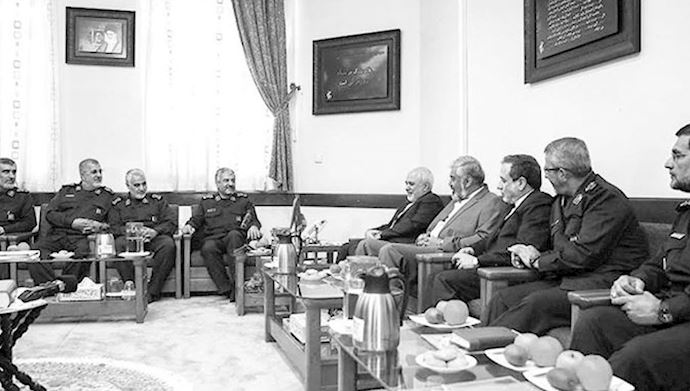 The terrorist IRGC commanders including Qassem Soleimani and Jafari, meeting with the “reformist” Javad Zarif, in the aftermath of the FTO listing by the U.S. state department.

In response to the recent designation of the Revolutionary Guards (IRGC) as a Foreign Terrorist Organization (FTO) by the United States, the Iranian regime’s Foreign Minister, Mohammad Javad Zarif, called a meeting with members of the IRGC’s senior command to discuss how to save face in light of growing alarm over the consequences of the action. IRGC chief Mohammad Ali Jafari and Quds Force chief Qasem Soleimani were both present at the meeting.

#IRGC Got What It Deserves
Most Iranians welcomed the news since IRGC has been tasked from the outset as a military machine for crushing all protests to clerical regime’s power.#IRGCTerrorists#BlackListIRGC @SecPompeo @USAdarFarsi https://t.co/8pQZG1zZAv

State-run television reported on the meeting and quoted Zarif as saying, “The Islamic Revolutionary Guards Corps has played a major role in maintaining the country’s security.”

Zarif ignored the economic ramifications of the terrorist designation and instead focused on a nonexistent possibility of a U.S. attack on regime forces, which he answered with a threat.

“U.S. forces in the region cannot carry out any military actions against [Iran],” he said. “However, if they do take measures, they will face an immediate, serious and firm response from our side.”

The FTO designation has thrown the regime into chaos, with various factions casting blame on the others. The Kayhan daily newspaper is closely aligned with regime Supreme Leader Ali Khamenei. Its editor-in-chief, Hossein Shariatmadari, faulted regime President Hassan Rouhani’s “Reformist” faction for the designation in a recent editorial.

“When a number of officials launch verbal attacks against the IRGC and question this entity, they are requesting the IRGC and other military units to return to their bases! They consider the IRGC’s presence across the Middle East as useless; the missile era over; the IRGC’s missile tests as provoking the enemy; and despite the deceptions behind the [2015] nuclear deal, they are still not willing to exit this disgraceful arrangement; and are in fact seeking to impose new restrictions through the Financial Action Task Force (FATF) and combating the financing of terrorism (CFT) bills… It’s obvious why the U.S. designated the IRGC as an FTO,” he wrote.

In an April 11th article, the state-run Siasat-e Rooz daily faulted regime factions that have been hesitant to go to war for the FTO designation, writing: “The Americans have seen how some people in [the regime in Iran] are terrified of even the shadows of war. Therefore, they are going down the path of gaining even more concessions from us.”

Ahmad Jannati, head of the mullahs’ Assembly of Experts, went a different route and expressed his support for the many Majlis (regime parliament) members who wore IRGC uniforms in solidarity with the Revolutionary Guards.

Regime Prosecutor General Jafar Montazeri was quick to bring the MEK into the discussion.

“There’s nothing new in the U.S.’ enmity and we have witnessed America’s enmity in different areas, including its support of the [MEK],” he said.

On April 10th, the regime’s Propaganda Coordination Council in Qom Province specifically claimed that the MEK was responsible for the IRGC’s inclusion on the FTO list.

Behind all of the infighting and assignment of blame is a deep fear. Officials have not come to a consensus on what will happen as a result of the terrorist designation or how to best address it, but everyone seems to understand that it does not bode well for the regime.

After Calls from the MEK and NCRI, the US is Set to Include the IRGC and MOIS in its Terror Blacklist

Javad Mansouri, the first IRGC commander, worried about military action, saying, “The day that the Americans have gone down every path and reached no conclusion, there is a possibility they will seek military measures.”

Foad Izadi, who is closely affiliated with Khamenei’s inner circle, explained the various options available to the regime.

The fact that a bunch of mostly well-known terrorist groups have come to defense of the IRGC further proves its FTO designation was well-justified.#Iran #BlackListIRGChttps://t.co/EMV7J3G3rv

“Considering the fact that we are in new circumstances regarding the IRGC, we are now facing even more difficulties regarding the FATF because the U.S. has a significant presence in FATF-linked entities. What can we do now that they have designated the IRGC as an FTO? If it is approved, we either have to cut off the IRGC’s budget, merge this entity into the army, or have the IRGC personnel fired. We can’t go down any of these paths,” he said.