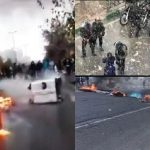 Written by Mohsen Aboutalebi on November 24, 2019. Posted in NEWS 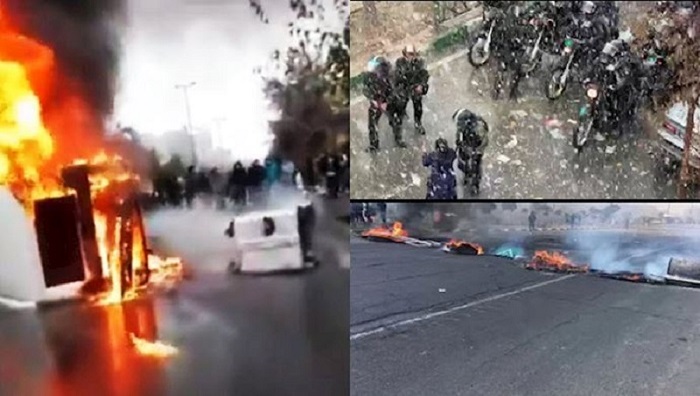 The recent uprising in Iran that began on Friday, November 16, 2019, once again revealed that the Iranian regime has no support among Iranian people and it is a very unstable and shaky regime.

Right from the beginning of the protests, Iranian officials attempted to blame shady foreign infiltration for the protests. Of course, the allegations were never backed up by evidence and the regime made no effort to explain how such protests have spread to over 171 cities and why it has been necessary to slaughter 300 on the streets and injure 4000 and arrest over 10000 innocent people. According to reports, the victims are mostly young adults and teenagers, many of them shot in the head and chest.

Cities across #Iran are experiencing a number of demonstrations, and the nationwide uprising is expanding into its tenth consecutive day on Sunday, November 24.#IranProtests #MEK #FreeIran pic.twitter.com/BlJixSbg9c

Even in the midst of all of its propaganda, many senior officials of the regime, including regime’s Supreme Leader, Ali Khamenei was forced to acknowledge that the forerunners of the current protest movement have been organized domestically. On the second day of the protest, the regime’s Supreme Leader delivered a televised speech in which he blamed the main Iranian opposition the People’s Mojahedin Organization of Iran (PMOI-MEK) for the unrest.

Evidently, in his speech, Khamenei also blamed the US, the monarchists and others to discredit the MEK and portray them as the puppets of the US and allies of deposed royalists, but numerous reactions of other officials of regime it made it clear that regime is going to target and crack down on the MEK supporters.

“We know that you (rioters) are the children of those executed from the MEK, you are the children of the MEK driven from their home… we know you well… do not go after your unfortunate ancestors. Repent and give in… The main cells of the sedition of the arrogant (The US) are the MEK and the monarchists and the Judiciary must act firmly and hand in the maximum punishment to the main elements involved in the recent riots, which has disturbed people’s peace.” Felahati, Khamenei’s representative in Gilan province, north of Iran, said in a televised speech.

The “maximum punishment” that he cited was mass arrests and execution of the protesters. According to the statement of the National Council of Resistance of Iran (NCRI), the number of protesters killed has passed 300 people.

The People’s Mojahedin Organization of Iran (PMOI/MEK) has announced that the religious fascism ruling Iran has killed over 300 protestors in various cities of the country. The number of martyrs is much higher and the regime is trying to conceal the scale of its horrific crimes. The bodies of many of the martyrs have been collectively taken from hospitals or their location of martyrdom by the Islamic Revolutionary Guard Corps (IRGC) and other suppressive forces to unknown locations.” The statement reads in part adding:

“The number of the wounded during the nationwide uprising has surpassed 4,000 and the number of those arrested and detained by the regime since the start of the uprising to date in 165 cities has surpassed 10,000. The wave of arrests is ongoing and news and statistics about them are being revealed gradually. Tehran prisons, including Evin and Fashafooyeh, are overflowing with detainees and are facing extreme space shortages. The situation is even worse in some other cities and prisoners are being held in locations belonging to the IRGC, State Security Forces (SSF) and the government.”