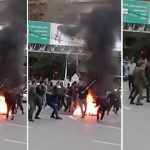 MEK: Iranian Regime Officials Are Threatening for More Crackdown on the Protesters

Written by Mohsen Aboutalebi on November 25, 2019. Posted in NEWS 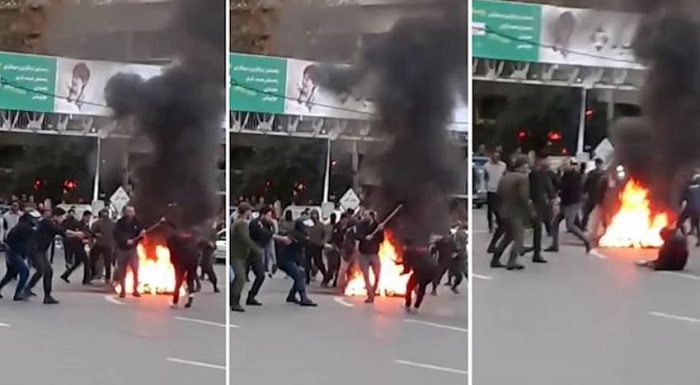 Despite the brutal and bloody crackdown, the protests continue in different cities in Iran. It is reported that there were demonstrations and clashes last Saturday between protesters and security forces in cities of Fardis, Orumiyeh, Shiraz and areas around the port of Mahshahr.

According to a statement by the Secretariat of the National Council of Resistance of Iran (NCRI), there were intense clashes between people and the State Security Force in Edalat Square in Orumiyeh on Saturday.

“The SSF was in combat formation and opened fire on the protesters. Despite their onslaught, the people were chanting anti-regime slogans.” NCRI statement reads in part adding: “Yesterday, Shiraz, Quds (south of Tehran), and Saveh highway were also the scenes of clashes and hit-and-run skirmishes between the people and the suppressive forces. Eyewitnesses said that clashes between people and SSF broke out in Mahshahr and neighboring towns as well.”

For more than ten days, the people of #Iran have been participating in one of the country’s most widespread protests in recent history. #IranProtests #MEK #FreeIran @USAdarFarsi pic.twitter.com/lSP5wQoNUD

At the same time regime’s senior officials, while threatening more suppression, are continuously making fearful remarks about the extent of the protests and role of the main opposition group, the people’s Mojahedin Organization of Iran (PMOI-MEK) in organizing the protests.

“Besides Tehran, Isfahan, Tabriz, and Ahvaz, the city of Shiraz had the most extensive movement by hooligans and those linked to the MEK. Thanks to the efforts of security and law enforcement forces” and “after the arrest of the main leaders of the movement associated with the MEK” calmly returned to the city.” The state-run news agency IRNA reported On November 23.

“On the first day, 28 provinces were involved in the matter. … For example, I was speaking to the IRGC commanders of some cities. In some instances, these riots reminded us of the Karbala-4 operation (during the Iran-Iraq war). … We seriously fought for 48 hours straight.” Ali Fadavi deputy commander of the Revolutionary Guard Corps (IRGC), said on November 22.

The Karbala-4 operation in 1986 was one of the regime’s biggest defeats during the Iran-Iraq war.

“There was an amazing and astonishing degree of coordination and they were only waiting for a spark in order to destroy the country. … There was a delay in shutting down the internet but still, it helped to disrupt the sophisticated organization of these groups. … This was a different kind of sedition. … As someone who was present on the scene, I believe that only God saved us.” Brig. Gen. Salar Abnoush, the operations commander of the IRGC’s paramilitary Bassij forces said on November 21.

“These people were connected to governments and the Mujahedin-e Khalq (MEK)… I believe 34 MEK members have been arrested so far. A vast network of individuals, operating not under the MEK’s name, but pursuing their line and modus operandi were also identified.” Ali Shamkhani, the Secretary for the regime’s Supreme National Security Council, said in a press conference on, November 24.

The Secretariat of the National Council of Resistance of Iran (NCRI) released a statement on November 25 in this regard.

“Since the uprising started, Mrs. Maryam Rajavi, the President-elect of the National Council of Resistance of Iran (NCRI), has repeatedly called on the UN Security Council, governments, and international human rights bodies to take action to immediately halt the massacre and suppression of the Iranian people and secure the release of those arrested. She has also emphasized the imperative to dispatch UN delegations to Iran to investigate the situation of the martyrs, the wounded, and the prisoners.” The NCRI statement reads in part.