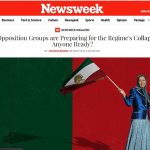 Newsweek,”Iran’s opposition Groups are Preparing for the Regime’s Collapse. Is Anyone Ready?” is False and Propaganda 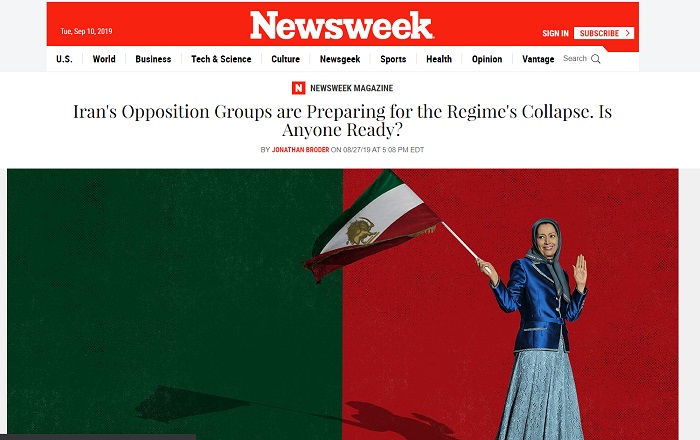 The Front Page photo on the hit piece by Newsweek Propaganda article titled: “Iran’s Opposition Groups are Preparing for the Regime’s Collapse. Is Anyone Ready?
The article is aimed at demonizing the MEK, the principal opposition to Iran’s dictatorship. Published in August 2019.

This summer’s highly-visible protests and rallies by the Iranian Opposition drew increased attention to the People’s Mojahedin Organization of Iran (PMOI / MEK) and the imminent collapse of the mullahs’ regime. The rallies were overwhelmingly successful in achieving their aims and received widespread support from international leaders across the political spectrum, it was therefore anticipated that both the supporters of the policy of appeasement and those who have fallen prey to the regime’s anti-MEK propaganda will give lip-service to the Iranlobby and/or Iran’s notorious Ministry of Intelligence and Security (MOIS) .

Former MEP: “The Key Task of MOIS Is to Identify and Eliminate Opponents of The Regime, The MEK”

In their August 29th edition, Newsweek published an article entitled “Iran’s Opposition Groups are Preparing for the Regime’s Collapse. Is Anyone Ready?” The article noted that “something is different now” and that the prospect of the “collapse of the Tehran regime has raised the question of what kind of Iranian government might come next.” This is an excellent question, but Newsweek missed the mark in answering it, claiming that the mullahs’ regime should be preserved and appeased.

The regime is indeed faltering and close to collapse, and the article correctly states that the MEK “is the oldest, best organized and best known of several Iranian opposition movements.” The author falls victim to regime propaganda on a number of counts, though, doubting the MEK’s base of popular support and using a number of discredited and unnamed sources to support an anti-MEK stance that largely arises from political opposition to current U.S. policy towards Iran.

It is important to note that inside Iran, it is deadly to speak in support of the MEK. The regime has murdered more than 120,000 MEK members and supporters since 1981, and those who continue to support the MEK do so at great personal risk. Despite this, regime leaders and state media express daily concerns about their fear of the MEK’s growing influence in the country. The measure of the MEK’s popular base of support can best be measured by the words of those who fear it.

EDITORIAL: Powerless Against the #Iran'ian Resistance's Advances, the Mullahs' Admit to the #MEK's Popularity and Influence in Iranian Householdshttps://t.co/fJJPQhi06I pic.twitter.com/3N3Ifmoufg

Mr. Broder was invited to the Ashraf-3, the MEK’s headquarters in Albania, to speak to members and ask questions before writing his article, but he declined. Dozens of other journalists have accepted this offer and painted a different picture of the MEK.

If Mr. Broder had visited Ashraf-3, he might have learned the following facts, which were incorrectly stated in his article and rebutted by the National Council of Resistance of Iran (NCRI):

Regime Scientists Were Not Murdered

The MEK did not murder Iranian regime, nuclear scientists. In a September 28, 2012 background briefing, two senior State Department officials officially stated, “The United States Government has not claimed that the MEK was involved in the assassination of scientists in Iran.”

MEK Was Not Delisted as Act of Charity

Newsweek contradicted its own reporting on the blacklisting of the MEK. In September 2002, Newsweek reported that the terrorist listing was an act of political goodwill by the Clinton administration. The magazine printed a 1997 quote from Martin Indyk, the Assistant Secretary of State for Near Eastern Affairs, which said, “[There] was White House interest in opening up a dialogue with the Iranian government. At the time, President Khatami had recently been elected and was seen as a moderate. Top Administration officials saw cracking down on the [MEK], which the Iranians had made clear they saw as a menace, as one way to do so,”

The MEK’s delisting was not an act of charity, as claimed in the article. Secretary Clinton was forced to remove the MEK from the FTO list after being ordered to do so by the D.C. Circuit Court of Appeals, the nation’s second highest court. The unanimous ruling found no evidence that the MEK was involved in terrorism. 100 members of Congress from both sides of the aisle also urged the State Department to delist the MEK.

MEK Was Not Involved in Embassy Takeover

The assertion that the MEK “support[ed] the takeover of the U.S. embassy” and broke “with Khomeini over his decision to release the American hostages” is patently false. The hostage crisis was an attempt by Khomeini to create anti-American sentiment in Iran in order to ensure the passage of the newly-drafted constitution, which was based on the principle of absolute clerical rule. The MEK strongly opposed the new constitution, and Khomeini sought to marginalize any opposition to his rule. On the sixth anniversary of the takeover, then-Chief Justice Abdol Karim Moussavi Ardabili admitted the motivation for the crime in a Friday Prayer sermon: “[The embassy takeover] brought about the fall of the Provisional Government, the isolation of the liberals and the confusion of left-wing groups and the Monafeqin (the MEK) and exposed their real faces. As Imam Khomeini said, this revolutionary move was greater than the first revolution.”

1988 Massacre Was Not Linked to War

The Iranian regime began executing MEK members and supporters after a peaceful demonstration in Tehran on June 20, 1981, during which the Revolutionary Guards (IRGC) opened fire on the crowd of 500,000 protesters, killing thousands on the spot. The 30,000 political prisoners in Iran who were executed during the 1988 Massacre were not associated with the MEK’s incursion into western Iran, as has been explicitly stated by Amnesty International and the late Ayatollah Hossein-Ali Montazeri, Khomeini’s would-be successor, who was deposed for his opposition to the executions. The regime has long used the war as a justification for the massacre of 30,000 of its own citizens, including teenagers, pregnant women, and the elderly.

.@amnesty press conference revealing new report on Iran now showing video about the thousands of prisoners who were forcibly disappeared & secretly killed in 1988 and their families who continue to suffer today https://t.co/UJdAIBovB9 #TruthAndJusticeNow

HRW Report Was Not Reliable

The author of the 14-year-old Human Rights Watch Report was paid by an Iranian regime lobbying group operating out of Washington, D.C. Retired Brigadier General David Phillips (then an active Colonel), the commander of the U.S. 89th MP Brigade that protected the MEK’s Camp Ashraf in 2004-2005, wrote a letter to HRW Executive Director Kenneth Roth in response to the report, stating:

“I believe that your recent report was based on unsubstantiated information from individuals without firsthand knowledge or for reasons of person gain. I have spoken to large groups of MEK/PMOI members and have also had one on one private conversations with individual members. At no time did any member, ranging from young male and females to the very senior leadership, ever report any of the type of conduct outlined in your recent report.”