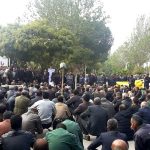 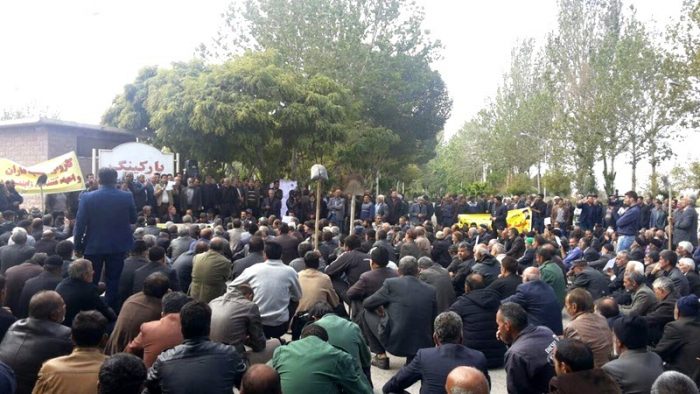 Strikes and protests are still raging across Iran and show no sign of abating as workers continue to express their dissatisfaction with labor conditions and the ever-worsening economic crisis in the country.

Update (7:30 AM Thursday, November 29th): On Thursday morning, MEK sources inside Iran reported that security forces raided the home of Ali Nejati, one of the striking workers from the Haft Tappeh sugar mill. Nejati was arrested, and when his family asked to see the arrest warrant, they were beaten by police.

The factory workers marched to the mayor’s office, chanting, “Imprisoned workers must be freed!” and “Nationalize the company!”

Iranian drivers from across the country have expressed their solidarity with the striking factory workers through video messages. One driver said, “I understand your situation. I am a driver and we too are facing harsh conditions. I stand with you and wish you the best of luck in achieving your demands.”

Thursday was the 25th consecutive day of strikes for the factory workers at the Haft Tappeh Sugar mill in Shush. The workers are striking in protest of months of unpaid wages and the privatization of the company.

The workers published a list of their demands on their Telegram channel and in a written statement. Their demands include basic labor rights such as regular payment of salaries, employer payment of insurance fees, job security for contract workers, and provision of work tools and materials.

Protests Continue to Rage in Ahvaz and Shush

Most of the workers’ demands are already guaranteed under the Iranian regime’s labor laws, but these laws are not being enforced. For example, Iranian labor law dictates that employers are responsible for providing transportation or compensation for transportation for their employees’ commute to and from work. Haft Tappeh has ignored this regulation altogether. Employers are also required by law to provide one hot meal per shift. This law has also been disregarded by Haft Tappeh’s owners.

The regime has responded to the workers’ demands by sending suppressive forces to arrest the striking workers and by dispatching the head of the regime’s judiciary to threaten the strikers and accuse them of sedition.

The Haft Tappeh factory workers have also asked for the release of their colleague, Esmail Bakhshi, as part of their demands. Bakhshi is a spokesperson for the protesters who was arrested with several others as part of a crackdown by suppressive forces last week. After the striking workers and a growing number of supporters rallied for their release, the regime relented and released the other jailed protesters, but Bakhshi remains in custody.

The farmers of Isfahan are entering their third consecutive month of protests over the lack of access to water, which has wreaked havoc on agriculture in the province. Agriculture is the primary source on income in Isfahan, so virtually everyone in the region has been affected by the scarcity of water due to the drying of the Zayanderud River.

Isfahan’s farmers blame the water crisis on the regime’s corruption and mismanagement of the country’s water resources. Over the past two decades, the regime has diverted the Zayanderud River, which supplies water to the Isfahan region, to its factories upstream of Isfahan, leaving the once-prosperous farmers without water to irrigate their crops. This, combined with droughts, has left the farmers without a source of income.

The Isfahan farmers have protested by blocking streets with their tractors and machinery and camping in intersections of cities and towns.

On November 25th, farmers in the village of Qarnah destroyed water pipes to prevent the transfer of water from their village to other regions. Special Guard mercenaries responded by attacking the farmers with tear gas, injuring several of the protesters. The farmers chanted: “Zayandeh Rood water is our absolute right!” “We die, we do not accept humiliation!” and “The farmer is awake, he hates (empty) promises!”

Also on November 25th, farmers in Qarnah staged a sit-in at the Qarnah mosque. State security forces attacked the protesters there and broke the mosque’s windows in the process.

The striking farmers at that sit-in held banners proclaiming: “We want our water rights!” “Do not split our Zayandeh Rood!” “Is there any helper?” “Death with dignity is better than life with humiliation!”  “Until when false promises?”

The water crisis has reached such epic proportions that regime has been forced to acknowledge it, at least in part. Hasan Kamran, a member of the regime’s parliament who represents Isfahan, admitted that the Ministry of Energy has given 1,592 million cubic meters of water to Isfahan Steel, Iron and Steel and military industries, leaving the people of Isfahan to survive on wastewater. “The law of water right goes back to 1964, and the Ministry of Energy had no legal right to change it and sell the water,” he said in an October 21st interview with a state-run media outlet.

In an earlier interview with Radio Farhang, Kamran said: “For a decade, water right of the farmers of Isfahan has been plundered… We have lied to them for 10 years… On the one hand, the bank brings an arrest warrant because he (the farmer) was unable to pay his debt. On the other hand, we give his wheat money late, we don’t give him compensation, we steal his water right; who is stealing from him? The same Ministry of Energy.”

Nasser Mousavi Largani, another member of the regime’s parliament, described the current agricultural conditions of Isfahan’s farmers in dire terms. “The farmers of Ghahderijan – their land has turned into desert. They do not have bread to eat. Likewise, the farmers of Pirbakon,” he said.

Ali Bakhtiar, another member of the regime’s parliament, told the Parliament News Agency that

the number of dairy cattle has dwindled from 50-60 thousand to less than 30 thousand. “Livestock is really disappearing … 70-80% of poultry farms in the region are not used,” said Bakhtiar.

The MEK salutes Isfahan’s striking farmers and calls upon all Iranians, particularly the youth, to join in solidarity with their protests and to support them in their demands for water rights.