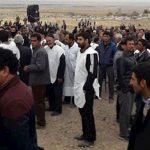 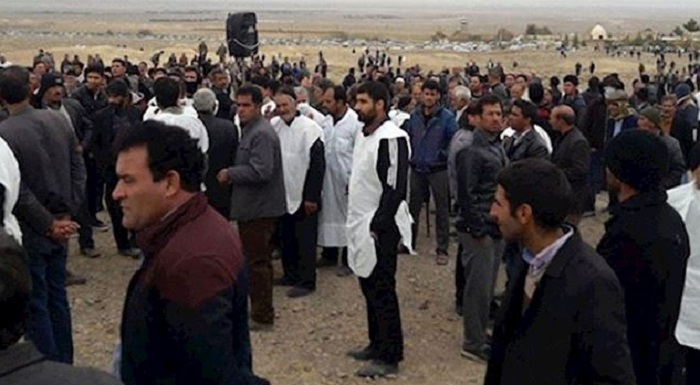 On Friday, the farmers of Khourasgan, Isfahan Province, marked their 65th day of protests with a demonstration at Khourasgan’s fruit and vegetable market.

The MEK sources in Iran report that on Thursday, farmers in East Isfahan donned white vests symbolizing grave shrouds to protest for water rights. The farmers wore the grave shrouds while they attended the Mahdieh Mosque in East Isfahan and then held a session to discuss the farmers’ concerns. The act was meant to convey the message that the farmers are ready to stand up for their rights, no matter the cost.

The farmers in Isfahan Province are protesting because of a lack of access to water for their crops due to mismanagement of water resources by the Iranian regime over the past two decades.

The Zayanderud River once flowed through Isfahan, providing the farmers in the region with ample water to farm their crops. But over the past two decades, the regime has built factories upstream of Isfahan and diverted the river to other regions. These practices, along with a prolonged drought, have caused the river to dry up before reaching Isfahan. Now the once-prosperous farmers of Isfahan can no longer sustain their crops.

Farmers in the region have protested numerous times over the past year in defense of their right to water, but the regime has failed to make meaningful changes. To date, none of the promises made by government officials have been fulfilled.

Several months ago, Isfahan’s farmers protested during Friday prayers by turning their backs to the prayer leader and chanting, “Back to the enemy, face to the country!” Since then, this chant has spread to other protests across Iran.

October 26
Najaf Abad, central #Iran
Angry farmers are holding a protest rally with their tractors, demanding answers to the issues they have long raised with local authorities.#IranProtests pic.twitter.com/lwISsfxAS4

Isfahan’s primary industry is agriculture, so the lack of access to water affects virtually everyone in the province. The farmers of Isfahan place the blame for the situation squarely at the feet of the regime and its leaders, who have mismanaged Iran’s water resources for decades. The MEK has called Iran’s water crisis one of the country’s “super challenges.” It is clear the mullahs have no plan to address this crisis.