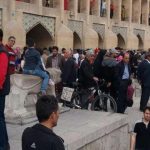 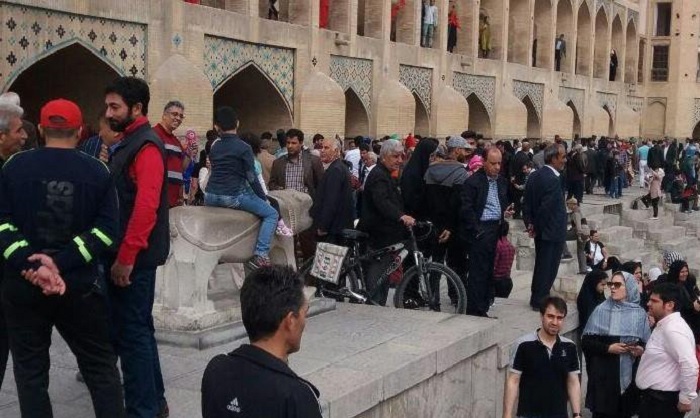 Archive Photo: Farmers in Isfahan are protesting, objecting the water shortages and violation of their rights by the regime-March 2018

The farmers of Isfahan are once again protesting water shortages and violations of their water rights. Sources from the MEK report that farmers in Varzaneh, Shatur, Ziar, and other cities in Isfahan Province gathered on Thursday to protest water shortages and lack of access to water.

The Drying of the Zayanderud River

The Zayanderud River used to flow through Isfahan, providing the wealthy farmers in cities such as Qahdarijan with water to irrigate their crops. Then the regime drained the river by  building factories upstream of Isfahan and diverting the water to other regions. These practices, combined with a drought, caused the river to dry up. Now the once prosperous Isfahan farmers have been forced into poverty.

The city of Qahdarijan is covered in agricultural land and depends upon farming. The drying of the

Zayanderud, the largest river in central Iran, has been disastrous for the area’s economy and environment.“The water cycle has been annihilated. The entire water of the river has been allocated to industry,” said an Isfahan environmental activist in July.

The representative from the city of Falavarjan on the Isfahan Islamic Council, Hesam Nazari, discussed the impact of the water shortage on the people of Qahdarijan in an interview with the state-run ILNA news agency.

“The city of Falavarjan has about 270 thousand inhabitants and has three districts and most of the people work in the agricultural sector,” he said. “I don’t exaggerate when I say that 90% of the people in Qahdarijan are engaged in all sorts of agricultural-related jobs.”

Before the Zayanderud dried, most farmers in the Isfahan region grew onions, but rice and other crops were grown as recently as a few years ago. Water shortages have forced farmers to stop growing these crops altogether.

“Some the people who were once wealthy, are currently so deprived and poverty-stricken that they are covered by relief foundations such as the Emdad Foundation,” Nazari said.

“Many of them are retired farmers who have large families and many children and relatives and have no other source of income. If this is not a catastrophe then what is it?” asked the Isfahan Council official on state-run TV.

Nazari affirmed the water rights of the Isfahan farmers. “If there is water in Zayanderud River, then all the people, especially those with water rights should have equal access to it. Of course, farmers are more entitled since their livelihood depends on it,” he said. “When a person has problems with his livelihood, he suffers very much. Unfortunately, at the moment, most people are unemployed and do not have an income in Qahdarijan.”

Nazari implicitly acknowledged the anti-regime protests that have taken place among Iran’s farmers, saying that protests would turn political. The MEK has helped to organize protest movements across Iran since nationwide anti-regime protests broke out last December amongst all sectors of society. Iran’s farmers are one of the many groups who have organized to repeatedly protest against the regime’s corruption and mismanagement of the country’s resources.

“The Ben-Brojen Plan, which incorporated providing a huge water supply to large industrial factories and using the water for other areas and many decisions that resulted from mismanagement has made the people angry,” Nazari said.

“The farmers say kill us or throw us out of Iran. Are we not as farmers part of the people of this country, they ask”, he said.

Nazari pointed out that the protesting farmers were only asking for fair distribution of water. “Unfortunately, the Ministry of Energy does not take into consideration the approved decisions of the Supreme Water Council and ignores farmers,” he said.

Nazari warned, “If officials cannot handle the demands of the protesters, they should know that these protests and demands may be exploited by the enemies of the Islamic Republic.”

The farmers of Isfahan protested water shortages at the beginning of the year. The protests and demonstrations focused on the regime’s corruption and lasted for more than two months. Sporadic protests have broken out in the region over the past eleven months as the uprising has continued throughout the country.