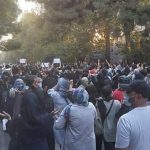 Written by Esmail Mohades on October 10, 2022. Posted in NEWS 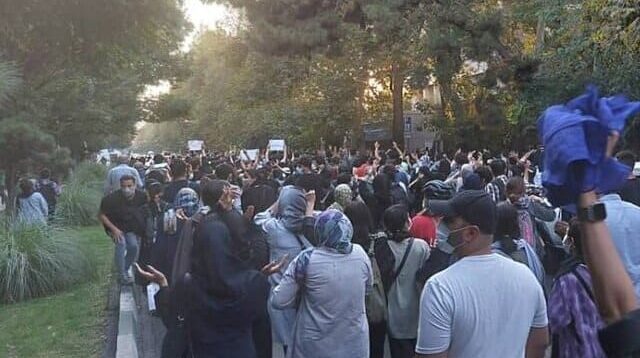 Despite the systematic and brutal crackdown, the uprising in Iran continues. The likelihood of the clerical regime’s demise grows as protesters refuse to yield to any pressure. The mullahs use propaganda to split and stifle the united national front as people condemn the regime as a whole. The labeling of protesters as “elements of Western governments” has become so cliche that even regime insiders are no longer willing to accept it, forcing the regime to find other ways to justify its brutality.

“Vulgarizing protesters’ demands” is the fourth of 14 actions suggested by this study for security forces to take in the event of an uprising. In other words, while the Iranian people demand regime change, the mullahs employ various strategies to smear the people’s legitimate demands for a democratic country.

The recent nationwide uprising began with the tragic murder by  the regime’s morality police of Mahsa Amini, a 22-year-old Iranian Kurdish girl. During the first days of the protests, officials attempted to portray demonstrators, particularly those in Kurdistan province, as separatists. This desperate attempt failed as protests quickly spread across the country.

When the regime was unable to break the country’s unity, it resorted to the tired tactic of “either us or chaos.” While the clerical regime is to blame for millions of deaths in Syria by supporting Bashar al-regime, Assad’s the mullahs and their apologists did not hesitate to blame “foreign powers” for attempting to turn Iran into “another Syria.”

“The enemy wants to turn our country into Syria,” Parviz Soury, a close aide to the regime’s Supreme Leader, Ali Khamenei, said on September 29, as per to the state-run Jahan-Ara website.

This gamble failed miserably because there is a viable alternative to the ruling theocracy, acting as a trailblazer in the fight for freedom and achieving regime change. Authorities from various factions have used every opportunity in recent days to attack the Iranian opposition, the People’s Mojahedin of Iran (PMOI/MEK), and the role of its Resistance Units in protests.

Many people believe Iran is on the verge of a revolution because millions of Iranians blame the regime for their socioeconomic problems. People chant slogans such as “death to the dictator” as protests continue.

#URGENT The people of #Sanandaj, #Kurdistan are being massacred by the Iranian regime, similar to #Zahedan. Heavy machine guns are being used against empty-handed civilians & they are ruthlessly murdering people. WE NEED IMMEDIATE ACTION! #Iran #Mahsa_Amini @UN @antonioguterres pic.twitter.com/xKZ6mrZ29g

When all other tactics failed, the regime resorted to calling protesters “apostates” who “burn the holy Quran and mosques.” The mullahs and their propagandists attempted to portray the people’s sole demand, particularly that of women, as the removal of mandatory veiling. They also referred to courageous Iranian women and girls as “morally corrupt,” and men and boys as “perverts” who profit from the current situation.

Iran’s ruling theocracy is grasping at straws to keep its evil rule going. The Iranian people have demonstrated their unwavering determination to destabilize this regime at any cost. Now is the time for the international community to act decisively and take concrete steps to assist Iranian citizens in regaining control of their country.