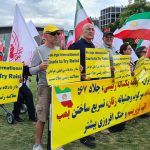 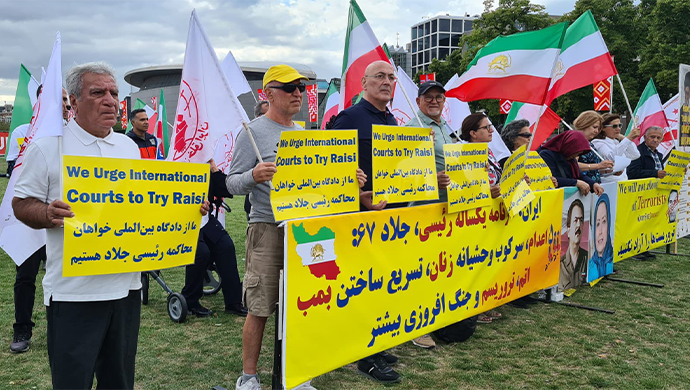 Iranian Americans protested in front of the White House in Washington, DC, calling on the Biden administration to deny Raisi a visa for the UN General Assembly in New York the following month. They emphasized that Raisi was directly involved in the summer 1988 prison massacre of over 30,000 political prisoners, the majority of whom were MEK members and supporters.

The protesters in Oslo denounced Raisi and the mullahs’ regime for their egregious human rights abuses and genocide. The protesters also expressed support for their Iranian neighbors who are currently protesting in the streets because of acute water shortages. These protests also demanded that the governments of Washington and Europe end their disastrous appeasement strategy toward the Iranian regime.

Iranians who support freedom of speech and MEK supporters participated in the demonstrations in the Netherlands and demanded that the mullahs’ government be overthrown by the Iranian people. Along with supporting the MEK Resistance Units across Iran, they denounced the regime’s ongoing support for international terrorism.

“Khamenei, Raisi, NO, NO, NO! Democracy/Freedom, YES, YES, YES!” they chanted, in reference to regime Supreme Leader Ali Khamenei and his selected president Ebrahim Raisi.

Supporters of the MEK and the National Council of Resistance of Iran (NCRI) coalition in Hamburg, Germany, called for an international investigation into Iran’s summer 1988 prison massacre and the prosecution of the mullahs’ regime’s perpetrators for their crimes.

Iranians who value freedom gathered in Stuttgart, Germany, in support of the MEK Resistance Units, which are still engaged in the fight against the mullahs’ regime there. They also denounced Raisi for his involvement in both the 1988 massacre and the more recent massacre of more than 1,500 protesters by the regime in the country’s uprising in November 2019.

Who is Ebrahim Raisi?

1/ He was Member of the Death Commission #1988Massacre

2/ He was Judiciary Chief in #BloodyNovember

Freedom-loving Iranians and supporters of Iran’s opposition, gathered in Belgium to condemn Brussels’ recent agreement with Tehran, which will result in the release of the mullahs’ diplomat-terrorist Assadollah Assadi and three accomplices.

On July 22, the Brussels Court of Appeal issued a decision prohibiting the Belgian government from extraditing Assadi to Iran. For his direct involvement in a bomb attempt that was prevented against the “Free Iran” rally held in 2018 just outside of Paris, Assadi was given a 20-year prison sentence in Belgium on February 4, 2021. His three accomplices received sentences of up to 18 years in prison as well.

August 27 – Belgium
Freedom-loving Iranians and supporters of the #Iran opposition PMOI/MEK held a gathering condemning Brussels' agreement with Tehran to that will see the release of the mullahs' diplomat-terrorist Assadollah Assadi and his three accomplices.#No2Appeasement pic.twitter.com/GaQM7BOiLK