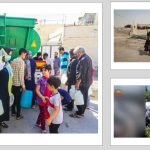 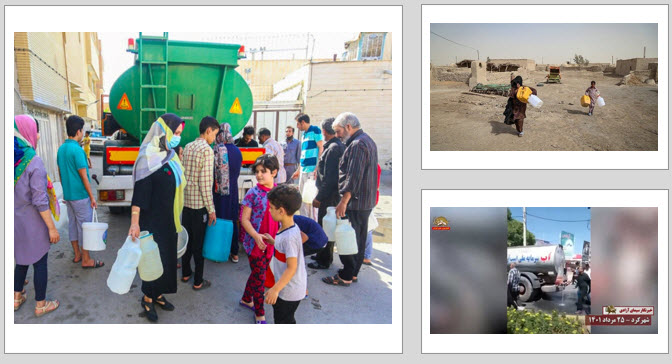 According to reports from the western Iranian city of Hamedan, there hasn’t been a single drop of running water for the locals in the last five days. The water in the pipes is filthy and insufficient for washing, let alone drinking or cooking.

In a country with abundant water resources, more than 300 cities and thousands of villages in Iran are currently experiencing severe water shortages. In some areas, people have no access to running water other than tankers that arrive on a regular basis to provide the bare necessities. The irony is that massive floods have also hit many cities, towns, and villages across Iran in recent weeks. This demonstrates the unfortunate reality that the mullahs’ regime and its destructive policies are to blame for Iran’s escalating water crisis.

The lake behind the nearby Ekbatan Dam, which supplies water to Hamedan, has dried up and become a muddy wetland. In such circumstances, Hamedan province officials have made more hollow promises and encouraged the people to bear these conditions for the time being. On August 18, the provincial governor was seen on state television saying that the water shortage issue would be resolved “in the coming months.” He also stated that they will lease 12 wells to have their waters processed through the city’s piping system.

Even if one believes this promise, how can 12 wells provide for the city of Hamedan, which has a population of over 500,000 people? What about the farmers of Hamedan province, whose water will be diverted for other purposes? Of course, Iranian regime officials are under no obligation to respond to these questions.

What regime officials are concerned about is the high likelihood of this “water crisis” escalating into a “security crisis,” as described by the regime’s Intelligence Minister during a recent visit to the city of Shahrekord in Chaharmahal & Bakhtiari, where residents have also been suffering from severe water shortages for weeks.

Former regime Environment Protection Organization head Issa Kalantari called some experts’ predictions about Iran’s water resources depleting in the next 50 years “overly optimistic.” On August 8, 2018, he was quoted by the state-run “Dideban Iran” website as saying, “Aside from Khuzestan, we will face a water crisis throughout Iran.”

The water crisis in Iran over the last four years suggests that Kalantari’s forecast was also overly optimistic, because not only is Khuzestan province suffering from water shortages, but it is also considered one of the country’s most water-scarce areas. Last year, the mullahs’ regime resorted to a bloody crackdown on residents of Khuzestan province who took to the streets in protest of severe water shortages.

What is certain is that this regime and its policies will only destroy the country in its entirety day by day, year by year. Although the mullahs’ rule has continued to devastate Iran’s environment, the severe water shortage crisis and bleak future are by far the most dangerous of these quandaries. Uncontrolled dam construction by the regime to line the pockets of the corrupt IRGC, as well as unbridled extraction from underground water sources and worn out and untended water infrastructure in cities and towns, have resulted in strategic setbacks for Iran’s water sources. This has severely harmed the country’s lakes and wetlands, resulting in land subsidence throughout the country, including in Tehran.