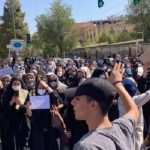 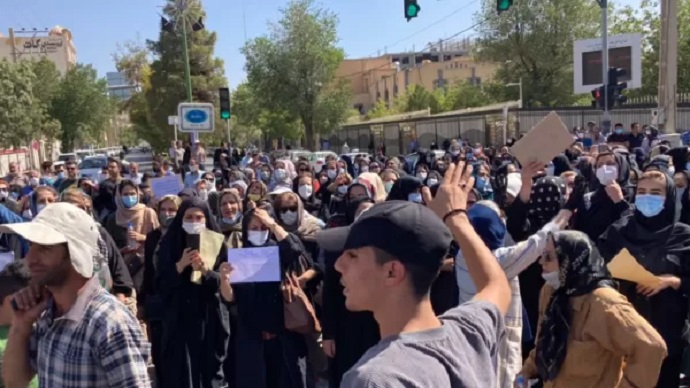 Locals took to the streets in Shahrekord of Chaharmahal & Bakhtiari province to protest severe water shortages  on August 16, 2022 (Image via social media)

On Monday, August 16, residents of Shahrekord, a city in the Chaharmahal & Bakhtiari province of southwest Iran, took to the streets to protest severe water shortages in their community and other cities. The protesters immediately started chanting anti-regime slogans, denouncing the mullahs for their crimes and corruption, and blaming the entire system for the long-standing problems of the country. The Shahrekord protesters were clearly referring to regime President Ebrahim Raisi and his failed policies after one year in office by chanting “Death to Raisi!”

The water shortage crisis stands out among Iran’s environmental catastrophes brought on by the mullahs’ four decades of disastrous policies, and it has been developing for years. Numerous protests and uprisings by farmers and people from all walks of life have been sparked by the fact that a significant portion of Iran’s population is experiencing water shortages. This was evident in the protests held by the farmers of Isfahan in November 2021 and the province of Khuzestan in July 2021. This year, the situation has reached new heights.

During their demonstrations in Shahrekord in April, residents of the province of Chaharmahal & Bakhtiari denounced the “water mafia” of the ruling party. They wanted regime officials to stop using their province’s water resources for their own purposes and initiatives involving the Revolutionary Guards (IRGC).

April 17 – Shahrekord, central #Iran
People are protesting the regime's destructive policies of transferring their locals waters by the Revolutionary Guards (IRGC) for their own benefits.#IranProtests #اعتراضات_سراسریpic.twitter.com/rsM8JdHAHh

In an effort to defuse the situation, Raisi hurried to Shahrekord on June 9 and made a number of empty promises. “We have plans to supply water to the province.” When he arrived at the Sharekord airport, he declared, “They have been scheduled to deliver solutions this year, and hopefully, by the end of the year, we will see definitely see results that the people will be informed about.”

The people of Shahrekord have seen nothing but a worsening of their circumstances as a result of these empty promises. They no longer have running water in their homes, even though they initially experienced water shortages for their agriculture. This is precisely the reason why during their more recent protests and demonstrations, the locals have been harshly critical of Raisi himself.

Shahrekord, Chaharmahal, and Bakhtiari provinces, which once ranked among Iran’s richest regions in terms of water sources, are not the only places where there are water shortages.

Officials of the regime claim that there is a severe water shortage in at least 300 Iranian cities. As a result of the water crisis, there are also reports that many villages will lose all of their inhabitants, and about 7,000 villages will be forced to rely on trucks as their only source of drinking water.

Although the mullahs’ rule has continued to harm Iran’s environment, the severe water shortage crisis and bleak future are by far the most dangerous of these problems. Iran’s water sources have suffered strategic setbacks as a result of the regime’s unchecked dam construction that aims to line the pockets of the crooked IRGC and unrestrained extraction from underground water sources. This has caused widespread land subsidence and severe damage to the nation’s lakes and wetlands.

The water crisis will undoubtedly be resolved if Iran has a popular government, making agriculture the best and easiest sector to invest in.

Water will be conserved significantly if Iran’s agriculture is mechanized with drip irrigation and pressurized systems. For instance, there are no lakes or seasonal rivers in the nations of the Persian Gulf. The Persian Gulf provides water to cities like Dubai, which is situated in a desert that is much drier than the deserts of Iran.

Therefore, it is feasible to make investments in the water industry and prevent the extinction and destruction of Iran’s land. However, the regime is more concerned with developing ballistic missiles, exporting terrorism, and acquiring atomic weapons.

Millions of Iranians are being forced to leave their cities and villages and move to the slums or large cities due to a lack of water, and the regime is doing nothing to help them. Thousands of villages are currently supplied with drinking water by tankers.