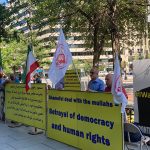 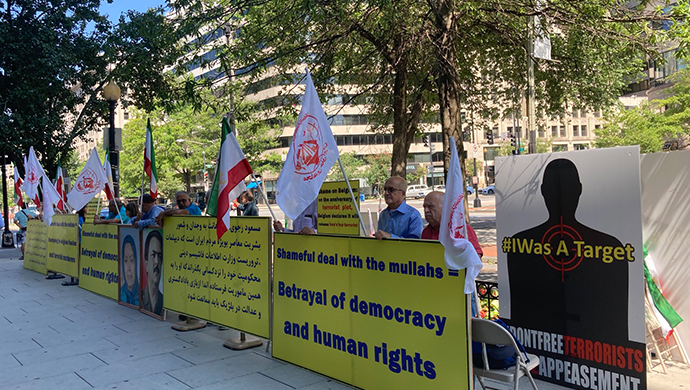 Iranian Americans rallying against the deal between the Iranian regime and Belgium that seeks to release Tehran’s convicted diplomat-terrorist Assadollah Assadi.

The worldwide campaign against a disgraceful agreement between Belgium and the Iranian regime launched by supporters of the Iranian opposition People’s Mojahedin of Iran (PMOI/MEK) and freedom-loving Iranians entered a new phase on Thursday, July 7. In exchange for the release of Assadollah Assadi, a diplomat-terrorist who is currently serving a 20-year prison sentence for his role in a bomb plot that was foiled and targeted an Iranian Resistance rally near Paris in 2018, Tehran is requesting the release of a Belgian national who is being held hostage by its government.

Following two contentious debates over the government’s proposed prisoner swap with the Iranian regime, the Foreign Relations Committee of the Belgian Parliament voted to approve the treaty on July 6 and forwarded the text to the Parliament for a final vote scheduled for Thursday, July 14.

Supporters of the MEK retaliated by holding demonstrations outside Belgian embassies and consulates around the world and expressing their displeasure through letters, papers, and other forms of documentation. Freedom-loving Iranians organized comparable protests outside Belgian embassies in Stockholm, Berlin, Vienna, Washington, and London in addition to their demonstrations in Brussels. There have also been reports of protests in France, Norway, the Netherlands, Denmark, Sweden, and Luxembourg, among other nations.

Iranians have also urged politicians, Nobel laureates, and scientists to write letters to Belgian government officials and the speaker of the Belgian Parliament to express their opposition to this agreement and demand that it be rejected. These letters and messages, according to reports in the European and international media, have put a lot of pressure on the Belgian government.

The Iranian regime and pro-appeasement groups in the West had gone to great lengths to keep a lid on this treaty and complete the entire approval process in the Foreign Relations Committee of the Belgian Parliament and on the floor of the Belgian Parliament in two days. The Iranian Resistance, on the other hand, exerted all of its might to block the implementation of this deal thanks to its extensive global network of supporters.

The impact has been significant, to say the least. Although the treaty proposed by the Belgian government was approved by the Foreign Relations Committee of the Belgian Parliament, those who opposed it criticized the government’s representative in the meeting, the minister of justice of Belgium. 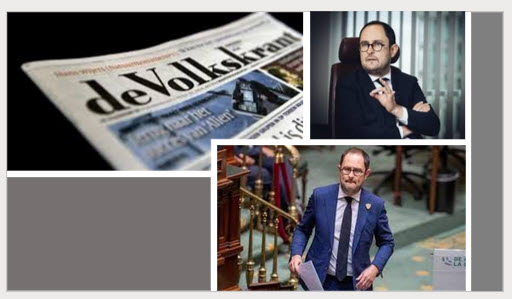 A Dutch newspaper, de Volkskrant, referred to these remarks in sarcasm: “The Justice Minister wanted to say there are times when you need to dirty your hands by reaching a deal with the Iranian regime!”

Belgian MPs exerted pressure on their Justice Minister to make available to them all the letters and messages of protest sent to the Belgian government by members of the U.S. Congress and other MPs from around the world. The Minister promised to comply with the MPs’ demands and acknowledged that 300 emails had been received up to that point. The Belgian MPs made it clear that they need the texts within 30 minutes. The government also promised to make all documents pertaining to the agreement with the Tehran public.

By drawing attention to a deal that Brussels and Tehran intended to keep secret, the Iranian Resistance campaign has already achieved a significant victory. The reputation of the Belgian government and Parliament will suffer greatly if the two governments are determined to see this agreement through.

The Iranian Resistance and its supporters around the world will continue their campaign to end Western appeasement, which has enabled the mullahs’ regime to increase its support for international terrorism and hold dual nationals as hostages.