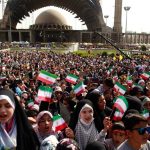 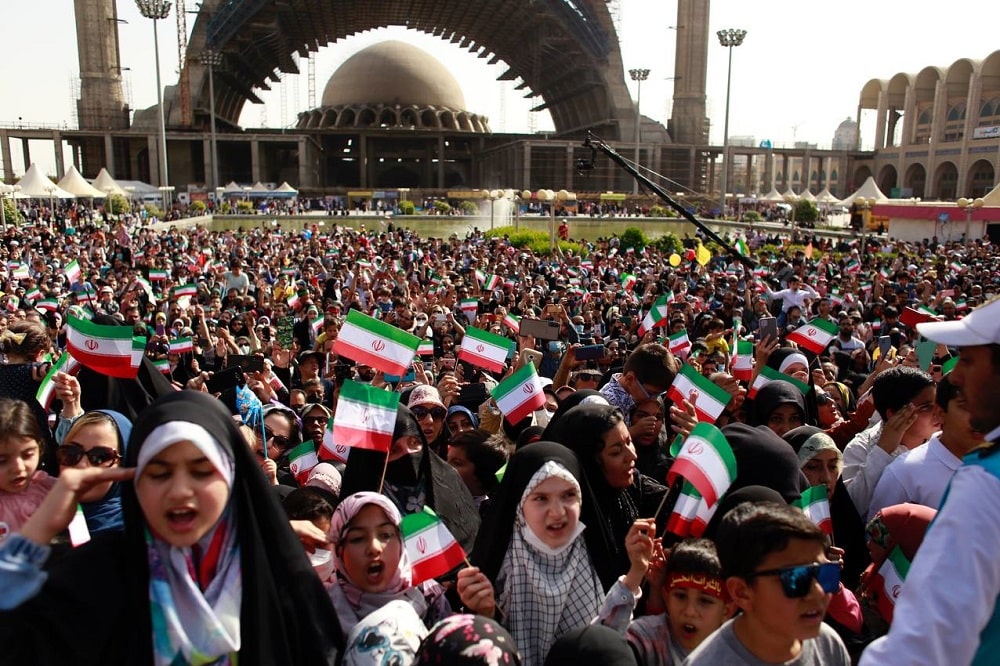 “Hail to the Commander,” The regime had made rehearsing this song compulsory in all Iranian elementary schools.

The Iranian regime forced children to attend gatherings to sing a pop-genre song, “Hail to the Commander,” swearing allegiance to the mullahs’ supreme leader, Ali Khamenei, in a last-ditch effort to imply that it enjoys widespread support. The regime had made rehearsing this song compulsory in all Iranian elementary schools. To project a hollow show of power, the mullahs even allowed women to perform this song at Tehran’s Azadi sports stadium.

People in Abadan, southwest Iran, were mourning their loved ones who died last week when a ten-story building collapsed. While the children were forced to salute Khamenei, tens of thousands of people across Iran have been chanting “Death to Khamenei” in recent days.Qassem Soleimani was an absolute abomination for forcing children to perform such a song, vowing to defend Khamenei with their “little bodies,” and promising to follow in the footsteps of Khamenei’s terror master.

Iran’s religious fascism has used the Nazis’ propaganda strategy since taking power in 1979, attempting to portray the regime as a sacred government with an infallible and holy supreme leader. Ruhollah Khomeini, the regime’s founder, prolonged the disastrous Iran-Iraq war by using propaganda, sending hundreds of thousands of Iran’s vibrant youths and bright children to war fronts.

In schools, regime officials implied that underage students were sinners and dispatched repentant children to the front lines. They were given a “key to heaven” and assigned the task of clearing minefields. Hundreds of thousands of children died, many of whom were ripped to shreds when the mines they were forced to run over exploded. Children were forced to spy on their parents who opposed “Imam” Khomeini as the regime cracked down on opposition groups. 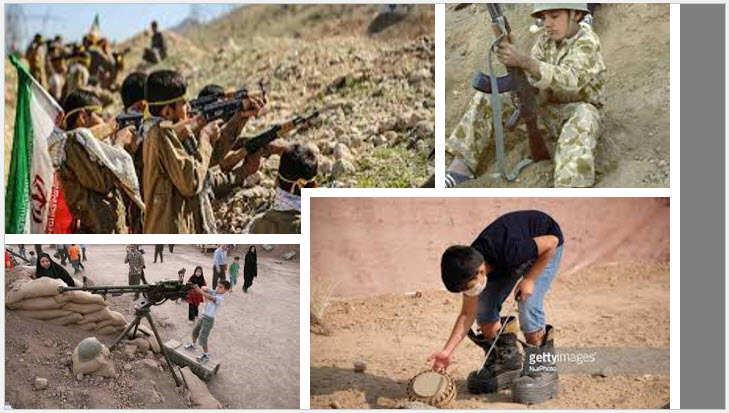 Hundreds of thousands of children died, many of whom were ripped to shreds when the mines they were forced to run over exploded.

Over 33,000 students were killed on the frontlines of the Iran-Iraq war, per the Iranian regime. Iranian boys “as young as nine were reportedly used in human wave attacks and to serve as minesweepers in the war with Iraq,” according to a 2001 report by Child Soldiers International Organization. During the Syrian conflict, Iranian videos showed children singing anthems and expressing their willingness to die “protecting the holy shrine of Zeinab,” the daughter of the first Shi’ite Imam, an excuse Tehran used to justify its ominous presence in the country. Why did the regime feel compelled to put on this heinous show now?

During recent uprisings, Iranian youths demonstrated their contempt for the regime. The regime’s sham parliamentary and presidential elections were boycotted by the vast majority of Iranians, who demanded regime change.

The situation had progressed to the point where Iran’s state media admitted that this despicable display of power had failed.

“This song promotes militarism. It seems that we have a long battle ahead. People’s living problems, poverty, and brain drain are all gone. What are we trying to imply? On May 21, the state-run Ensafnews website stated, “This is not a national song and is not even considered a good piece.”

Protests are sweeping the country, and citizens from all walks of life are demanding their basic rights. They blame the regime’s leaders, particularly Khamenei, for causing and exacerbating Iran’s economic woes.