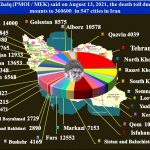 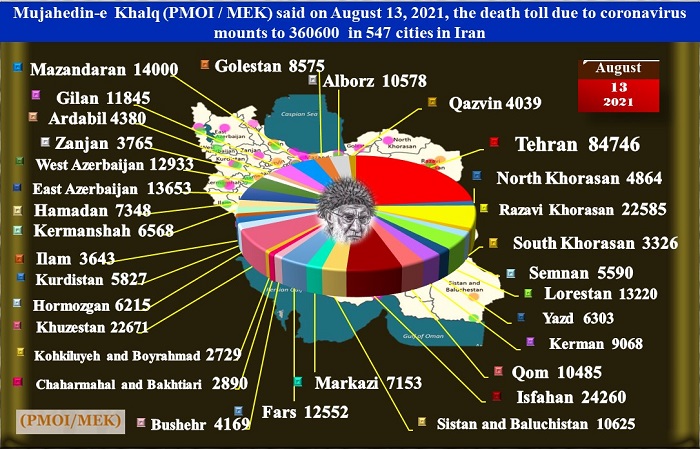 The coronavirus outbreak in Iran is spreading rapidly. The death toll is staggering, and the people are powerless to protect themselves. The People’s Mujahedin of Iran (PMOI / MEK Iran), and the National Council of Resistance of Iran (NCRI), reported that every fresh piece of information regarding the scenario exacerbates the already dire situation.

The regime’s oligarchy of political and economic power was emphasized over the people’s health, and the regime’s use of the coronavirus to ensure its survival following major protests, have resulted in the coronavirus spreading uncontrollably.

On August 8, Iran’s medical system’s head, Mohammad Reza Zafarghandi, said, “Those who made a statement to restrict the import of the vaccine should be held accountable for the record of coronavirus casualties.”

Vaccine import was ban by Khamenei

On August 11, 2021, Alireza Zali, the head of Iran’s coronavirus task group, admitted: “The cost of coronavirus drugs has increased many times over the cost of vaccine import, but they refused to allow the vaccine to be purchased because it was too expensive.”

The regime’s criminal and plundering policies

“We have much more bitter news for the coming weeks and things will get much worse. Delta lasted three months in India, and they quickly vaccinated everyone. We should not grieve over the price of the vaccine; we should even buy them at twice the price and vaccinate people.

(NCRI) and (PMOI / MEK Iran): We have much more bitter news for the coming weeks and things will get much worse.

Daily coronavirus deaths should be close to 1,500 and possibly more

In a situation like the one described by such an officer, the death toll is and will be far higher. The problem, and the grim fact, is that there is no reliable institution with a firm foothold in this regime.

“The actual number of daily coronavirus deaths should be close to 1,500 and possibly more,” remarked Abas Abdi, a regime element, on August 10.

Ali Khamenei, the regime’s supreme leader and the main culprit of this situation, gave a televised statement on February 7, in which he stated categorically that he will not purchase Covid-19 vaccinations. “The import of US and British coronavirus vaccines into the country is prohibited.”

On March 3, 2020, Khamenei tried to downplay the crisis saying: “In our opinion, this calamity is not such a great calamity, there have been bigger calamities than these calamities, and we have seen cases in the country. It is a temporary issue; It is not an extraordinary thing. These incidents occur in the country, of course, I do not want to minimize this issue, but we should not make it too big. There is something that is happened, a time that God willing, will not be too long, it will exist in the country, then it will leave.”

(NCRI) and (PMOI / MEK Iran): The ascension of Ebrahim Raisi to the presidency coincided with an increase in Covid-19 casualties in Iran.

The genocide in Iran is a grave crime against humanity

The genocide in Iran is a grave crime against humanity perpetrated under the guise of Covid-19. The main perpetrators of this crime are Ali Khamenei and his dictatorship. The next time people walk to the streets to protest and demand regime change, they will remember this.

(NCRI) and (PMOI / MEK Iran): COVID-19 fatalities in 547 cities exceed 360,600. Tehran is in crisis as long as we don’t have a national system to evaluate mutated viruses, we will always be facing threats and we need to definitely provide measures to have an immediate and timely response,” said a senior health official in Tehran.

Mrs. Maryam Rajavi, the President-elect of the National Council of Resistance of Iran (NCRI): The multitudes of people killed by the coronavirus in Iran, leaving thousands of our compatriots grieving every day, hurt the heart of every freedom-loving and conscientious human being.