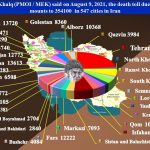 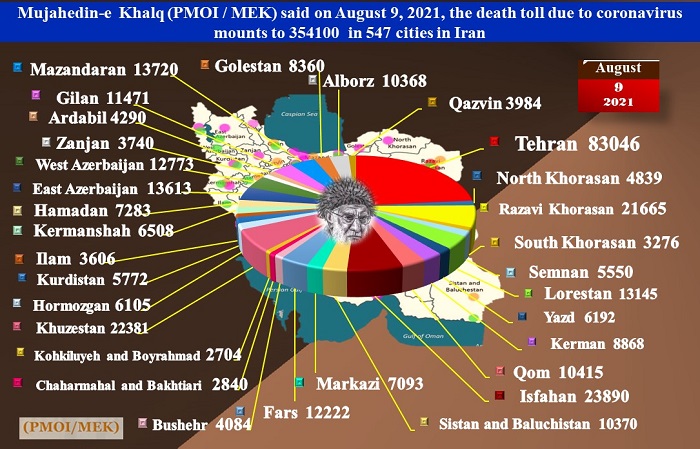 The National Council of Resistance of Iran (NCRI), and the People’s Mujahedin of Iran (PMOI / MEK Iran), reported that the coronavirus death toll in 547 cities surpasses 352,600.

An Epidemiologist said: “Neither the number of deaths nor the infections are correct. Last year’s COVID-19 related deaths in the civil registry report are also much higher than reported,”. (ISNA news agency, August 8, 2021)

Hospitalized patients during the fifth outbreak have doubled

Mahmoudabad Health Manager said: “Coronavirus is out of control. Hospital beds are full, and we do not have an empty bed for any new patient,”. (IRNA news agency, August 8, 2021)

Amir Al-Momenin Hospital, in Ahvaz spokesperson, said: “Now, even the emergency beds are full. The congestion of COVID-19 patients is more than our capacity,”. (ISNA, August 8, 2021)

(NCRI) and (PMOI / MEK Iran): COVID-19 fatalities in 547 cities exceed 352,600. Tehran is in crisis as long as we don’t have a national system to evaluate mutated viruses, we will always be facing threats and we need to definitely provide measures to have an immediate and timely response,” said a senior health official in Tehran.

Tehran University of Medical Sciences spokesperson said: “We expected such a high number of COVID-19 deaths from a month ago, and the increase in deaths will occur again,”. (ISNA, August 8, 2021)

Ardabil University of Medical Sciences spokesperson said: “The daily death toll of Covid-19 has doubled compared to this year’s average. The number of new coronavirus cases has increased by six-fold in comparison to last month,”. (IRNA news agency, August 8, 2021)