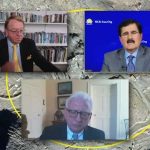 The International Atomic Energy Agency (IAEA) on February 23, 2021, released a report citing evidence of anthropogenic uranium particles at two sites in Iran. The Iranian regime has denied IAEA inspectors access to these sites for several months and has so far refused to answer questions regarding nuclear materials at the sites.

In a statement to his Board of Governors earlier this week, IAEA Director Rafael Grossi stated that the IAEA found the undeclared uranium particles to be deeply troublesome.

On Tuesday, The National Council of Resistance of Iran (NCRI), held an online conference on the subject of the Iranian regime’s secret nuclear facilities. the People’s Mujahedin of Iran (PMOI / MEK Iran) sources uncovered detailed evidence of nuclear enrichment activities at one of the two sites mentioned in the IAEA report. The information provides definitive proof that the regime has hidden evidence of its nuclear program from inspectors.

NCRI representative Ali Safavii presented evidence obtained from the People’s Mujahedin of Iran (PMOI / MEK Iran), sources. According to Mr. Salavi, the site is located in Abadeh, Fars Province, and was built in the mid-‘90s.

The Abadeh facility is part of a project managed by SPND, the primary regime entity responsible for the research and development of nuclear weapons. The site is also part of an initiative of SPND subsidiary METFAZ, a company that is involved in the research and construction of nuclear high-explosive detonators. METFAZ’s Marivan Project is overseen by explosives and high-impact specialist Dr. Saeed Borji.

The complicated nature of the facility required an elaborate cover-up, Mr. Safavi explained. “According to credible intelligence, [Borji] and some other senior SPND experts have formed front companies to conduct their research to advance SPND’s objectives,” he said.

Azar Afrooz Saeed LLC is one such company. It builds spherical tanks that explode in a similar fashion as nuclear detonators in experiments. Saeed Borji is Vice Chairman of the Board of this company.

Mr. Safavi next mentioned explosives specialist Akbar Motalebizadeh, a senior manager at SPND and one of the co-founders of the Arvin Kimia Abzar Company.

“This front company is involved in the production, purchase, sale, export, and import of tools and materials used in the drilling and operation of oil wells. Saeed Borji is the chairman of the board and Akbar Motalebizadeh is the managing director of this company,” said Mr. Sajavi.

reports provided by the People’s Mojahedin Organization of Iran (PMOI / MEK Iran) have made the international community aware of the intentions of the Mullahs regime to build nuclear weapons capability.

SPND was dissolved in March 2018

According to Mr. Sajavi, the Parsian Asr Arvin Private Stock Company is active in “commercial activities and services for the production, purchase, sale, export, and import of tools and materials used in the oil industry, drilling and operation of oil wells.”

The company, which was located close to the main offices of SPND, was dissolved in March 2018, after three years in operation.

“It is worth noting that in response to the IAEA’s inquiry into the detonation of multiple explosives at the same time, which had dual-use in connection with the explosion of nuclear weapons (EBW), the mullahs’ regime falsely claimed that it needs the technology to operate oil wells,” Safavi said.

(NCRI) and (PMOI / MEK Iran): the US imposes sanctions against Iran Atomic Agency and its chief Ali-Akbar Salehi.

The IRGC discovered it had been exposed in July 2019 and set out to destroy all traces of activity at the site. Buildings and facilities were demolished, and inspectors were denied access until the process was completed in August 2020.

The sanitization process used was similar to the ones used in Shian-Lavizan in 2004 and in Parchin in 2012. It would be foolish to think that a regime that has a time-tested process for sanitizing secret nuclear facilities could be trusted to hold up its end of a nuclear deal, particularly when it will not currently even come to the table for negotiations.

Mr. Safavi agreed. “It is naïve to think that by providing concessions or overlooking its violations, the regime will change its behavior. This has not happened and will never happen. A leopard never changes spots,” he said.