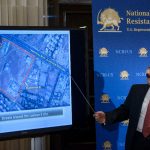 MEK Iran: Does the Regime Have a New Tactic to Enhance Its Nuclear Program?

Written by Amineh Qaraee on February 26, 2021. Posted in NEWS

(NCRI) and (PMOI / MEK Iran): Alireza Jafarzadeh during an NCRI press conference in Washington on 27 April 2017. During this conference, Jafarzadeh based on first-hand information exposed the continuation of the Iranian regime’s nuclear activities despite the nuclear agreement by the IRGC affiliated officials in SPND.

On February 9th, 2021, the National Council of Resistance of Iran (NCRI), and the People’s Mujahedin of Iran (PMOI / MEK Iran) reported that Mahmoud Alavi, the Iranian regime’s Minister of Intelligence and Security, agreed that the mullahs are aiming to build nuclear weapons.

The mullahs are aiming to build nuclear weapons

At one point a decree was issued by the regime’s Supreme Leader, Ali Khamenei, which said, “the fatwa forbids the production of nuclear weapons, but if they push Iran in those directions, it is not Iran’s fault. Those who pushed Iran in that direction will be to blame.”

In July 2015, the Joint Comprehensive Plan of Action (JCPOA), was signed between the Iranian regime and the P5+1, which included the United States, France, UK, Russia, China, and Germany. The main aim of the JCPOA was to stop the regime from establishing nuclear weapons in Iran. It never seemed that the regime ever took any notice as it has constantly been violating its obligations.

The Iranian Resistance revelation in 2002

Alavi has said without any reservation that the regime is producing an atomic bomb, even though the regime officials are denying the military features of its nuclear program ever since the Iranian Resistance publicly revealed in 2002 the presence of the Natanz enrichment and Arak heavy water sites.

Ali Akbar Salehi, who is the head of Iran’s Atomic Energy Organization, revealed in January 2019 how the regime failed to tell the truth to the P5+1 about filling the Arak reactor pipes with cement.

On January 22nd, 2019, an interview took place with the state-run TV and Salehi in response to a question about filling the heart of Arak’s heavy water reactor with cement, Salehi said: “…….The Arak reactor has a large hole that you can see. People are standing surrounding it. This hole has cilantro tubes leading into it where the fuel passes through.

The media journalist asked Salehi if the IAEA instructed them to do so, and he answered: “No, during the nuclear negotiations. We said fine, we will pour them with cement. However, we never said we had other tubes because if we did [the P5+1] would say pour them with cement, too. And now we have these tubes. They filled the hole of the reactor with cement using photoshop, and they keep on saying they filled the reactor with cement. This is the photoshopped version of that image.”

In November 2019, Salehi agreed that even though the regime accepted the JCPOA content, it had measures in place to continue uranium enrichment.

The regime had cheated in a nuclear negotiation

On November 3rd, 2019, in an interview with state-run TV, Salehi said that the regime had cheated in nuclear negotiation with the P5+1 and the regime continue to enrich uranium during and after the JCPOA.

He said: “there was an issue of Uranium enrichment in nuclear talks with the P5+1 countries, and they told us that the enrichment should be in that way, and we accepted. They thought that they won the negotiation. But, I could not explain this at that time, but we had a countermeasure, and while we proceeded with the case, they didn’t achieve what they planned for, and we did not become trapped in the enrichment deadlock. I don’t want to explain in more detail now, I haven’t seen anyone say this explicitly. So, when you enter negotiations, you may accept something, but you have countermeasures. But you can’t reveal your cards, and afterward, your opponent, who thought you were trapped, suddenly sees you are continuing your enrichment! How did it become possible?”