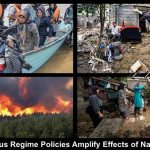 Written by Jennifer Jones-Kelley on October 14, 2020. Posted in NEWS 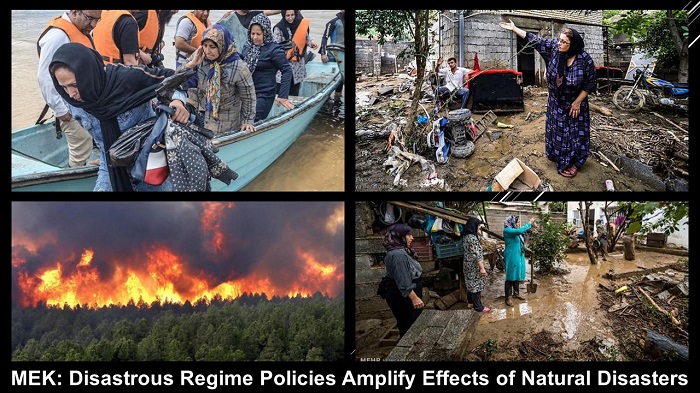 Reports from (PMOI / MEK Iran), sources inside Iran indicate that the victims of the disaster in many areas have been left stranded without access to emergency aid, drinking water, and supplies.

The United Nations recognized International Day for Disaster Reduction on October 13 as part of its ongoing effort to raise awareness of the important role that governments play in reducing the impact of natural disasters.

The U.N. program states that schools and hospitals should be built to withstand disasters, and governments should be prepared to provide basic services in crisis scenarios, including rescue equipment, food and water, transportation, energy, and communications infrastructure.

#Iran
Risk of Natural Disasters in Iran Increased Due to Regime’s Profiteering https://t.co/OsAZ9y7wKC

The Iranian regime has ignored these standards, leaving its people unprotected as a series of natural disasters has ravaged the impoverished country. The regime hands contracts to Revolutionary Guards (IRGC)-affiliated companies, who use subpar materials to construct bridges, dams, roads, and buildings and pocket the remaining budget. When earthquakes, floods, and fires strike, these materials crumble, leaving death and destruction in their wake.

The IRGC-owned Khatam‑al Anbiya Construction Headquarters is one of Iran’s largest builders of dams, having built at least 62 dams. This amounts to 50 percent of the country’s reservoirs and dams. According to the state-run Tasnim news agency, it currently has 285 ongoing construction projects. The company announced in September that these projects are worth 10 trillion tomans (approximately $23,750,000 USD), according to the state-run Young Journalists Club.

Government officials have also repeatedly signed off on reckless construction plans that create disasters. The 2019 floods killed hundreds in Shiraz because the regime allowed buildings to be constructed on the city’s centuries-old natural drainage system. Shiraz’s waterways prevented flooding for 500 years before it was paved over for buildings owned by IRGC officials.

#IranFloods-April 2
The confession of IRGC Ground Force Commander:" The floods survivors are very angry. W/out food, water ,no aid&electricity,There is no gov't official. No one dares to visit there"#Iran @USAdarFarsi pic.twitter.com/kqhYDG78D3 #CrimesAgainstHumanity#thread

A victim of the recent flooding in Talesh described the greed of regime officials in destroying Iran for their own benefit. “[U]nfortunately, construction on riverbeds has not stopped yet, and every year there is more… They [regime officials] destroy vegetation to build their luxurious villas. Some of these structures belong to government officials such as provincial governors, or representatives of regime offices, municipalities, state organizations, and ministries, who come here only for vacations,” he said.

The state-run Moroor website described these summer homes as a leading cause of soil erosion, due to the destruction of the vegetation caused by their construction. This damage makes the area vulnerable to floods, earthquakes, and landslides.

In the face of disaster, Iranian citizens are left stranded on rooftops or sleeping in trees waiting for a rescue that comes late if at all. Earthquake victims in Kermanshah Province who lost their homes in 2017 were still living in tents when floods destroyed the remainder of their meager belongings in 2019, according to the People’s Mojahedin of Iran /Mojahedin-e Khalk (PMOI / MEK Iran).

I call on the people of Iran and especially the youth to form popular councils in every city, neighborhood and village to confront the flash floods and their disastrous consequences, and to help the people who have suffered in the floods. #Iran#IranFlood pic.twitter.com/xIPBeoT291

Ordinary Iranians and MEK Resistance Units rushed to the aid of their fellow citizens during these disasters in the absence of government aid, risking their own lives to help their friends and neighbors.

On October 15, 2017, the semi-official ISNA reported that Isa Kalantari, the head of the Iranian Environmental Protection Organization condemned the regime’s management of the environment. He said that “during these years, if any enemy ruled in this land, it would not have done (what this regime has done) to the country’s natural resources and environment. Every disaster that has befallen the environment has taken place over the past four decades. Before that, many indicators of the country’s environment, such as water, we’re in a good position.”

The mullahs’ rule has made the people of Iran mourn every day because of some natural disaster. #Floods, earthquakes, fires, and many predictable and preventable accidents turn into disaster every day because the mullahs have ruined the country’s infrastructures.#Iran

Since Kalantari uttered those words, Iran has been ravaged by floods, earthquakes, and forest fires. In some regions of the country, people do not have access to potable water. In others, flood victims still live in tents. Iran’s hospitals are now overflowing with coronavirus patients, and the regime has mismanaged this crisis as well. The health and welfare of Iran’s people and their land hang in the balance. The people deserve a free and democratic Iran.

Today, regime change in #Iran is indispensable not only to freedom and democracy in Iran but also to the health of each and every individual in Iran and to the protection of their houses, cities and villages against natural disasters. #FreeIran2020 pic.twitter.com/Z08e5Kt9ed

Mrs. Maryam Rajavi the President-elect of the National Council of Resistance of Iran’s (NCRI): Today, regime change in Iran is indispensable not only to freedom and democracy in Iran but also to the health of each and every individual in Iran and to the protection of their houses, cities, and villages against natural disasters.

March 25 – Shiraz, south-central #Iran
More footage of floods and civilians left without any sign of authorities providing emergency aid.
More signs of the mullahs bringing nothing but #40YearsOfFailure to this country. #IranFlood #IranRegimeChangepic.twitter.com/pRJp1IdIzZ https://t.co/uvXuTqH3kR