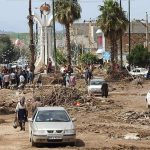 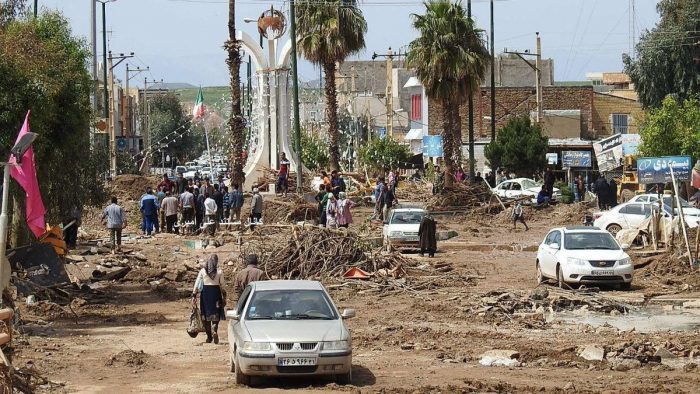 The picture of the city Poldokhtar West of Iran, after the flooding.

Regime Officials Continue to Deny the Extent of Damage from Disaster

For more than two weeks, Iran has been beset by catastrophic floods, which have caused untold human and financial damage. The regime has failed to provide emergency assistance to people affected by the floods and has consistently tried to cover up the extent of the damage caused by recent catastrophic flooding across the country.

#IranFloods-April 2
The confession of IRGC Ground Force Commander:" The floods survivors are very angry. W/out food, water ,no aid&electricity,There is no gov't official. No one dares to visit there"#Iran @USAdarFarsi pic.twitter.com/kqhYDG78D3 #CrimesAgainstHumanity#thread

On Tuesday, the Tasnim News Agency reported that Pakpour, head of the Revolutionary Guard Corps ground forces revealing in a shocking confession the current conditions in flood-stricken areas and the regime’s inaction in confronting the disaster in a telephone call to to Chief of Staff of the Armed Forces IRGC Brigadier General Bagheri.

In his telephone call, Pakpour reported, “They said for two or three days that the flood is coming, evacuate, without any foreground, without, for example, giving them a tent. Now they evacuate, where to go, go on a mountain which is cold, now water has taken everywhere, there are no roads, only an open gas road … Many villages, most of the villages have no road, there’s nothing, only with just a helicopter, some food is taken there …. Electricity is cut off because all cables have fallen.”

Pakpour’s report runs counter to the regime’s  false narrative about the floods and their aftermath. On Tuesday afternoon, regime Interior Minister Rahmani Fazli said, “From yesterday, I was pursuing relief to Poldokhtar minute by minute …in the middle of the night it became clear that, except for the problems caused by the damages due to the flooding and evacuation of some residential houses due to the flood for some of our citizens in Poldokhtar, no serious and specific human damage has been reported.”

An internal police report says that at least 90 people died in Poldokhtar during the most recent flooding, which is supported by local reports.

According to the state-run ILNA News Agency, Morteza Kashkouli, the Commander of the IRGC in Lorestan Province, said, “About 600 houses in the southern part of Mamoulan have been completely submerged, also 30% of the city of Poldokhtar has been surrounded by water since last night..but despite all these problems, fortunately, we have only witnessed one death in these areas.”

Kashkouli did not acknowledge or take responsibility for the regime’s failure to take action to protect its people from the deadly floods, but he did implicitly blame them for the severity of the damage caused by the disaster. “The main cause of the damage caused by the flood,” he said, “has been the mistakes of past years that have led to construction and cultivation in the riverbed.”

The regime’s Interior Minister announced that “some areas of the Khuzestan river basin, especially the areas of Susangerd, Shoosh and Dezful” should evacuate, but he failed to specify where and how residents of these areas should evacuate.

He further blamed victims of the previous deadly floods for their own situations, saying, “”Despite the anticipation and information and the allocation and equipping of some safe places, some of our fellow citizens preferred to stay in their homes or take refuge in the surrounding hills out of fear of flooding.”

The IRGC-affiliated Fars News Agency echoed this sentiment, saying, “The order to evacuate the city of Fath ul-Mobin and all the villages in the river basin in Shush, Shushtar and Azadegan plain was issued and people were asked to go to safe havens and emergency camps.”

Neither the Interior Minister nor the news reports specified where these safe havens or camps were. Local residents say that they never received any information other than an evacuation order. People were forced to flee to the hills or their rooftops to avoid the oncoming floods.

In the aftermath of the deadly floods, tens of thousands of Iranians are waiting for desperately needed government disaster aid. According to reports from the MEK network, 150,000 people in Lorestan Province lack access to drinking water. Flood victims across the country say that the government has failed to provide even basic emergency assistance.

Mrs. Maryam Rajavi, President-elect of the National Council of Resistance of Iran (NCRI), described the devastating floods in Iran as a national catastrophe. She blamed the regime for worsening the effects of the flood through its destructive environmental policies and said the the mullahs’ pillaging of the nation’s wealth had led to its inability to respond to natural disasters.

I urge the freedom-loving youths and members of resistance units and councils to not lose any opportunity in helping the flood-hit families. Help the people organize their popular councils which is the only solution for prevailing over this devastating flood.#Iran#IranFlood pic.twitter.com/lrwTjnPB5Y

Mrs. Rajavi further stated that the resources of the IRGC, the army, and the government belong to the people of Iran and should be made available to them to rebuild the country. The regime must also open the country to international relief funding, which it has so far denied.