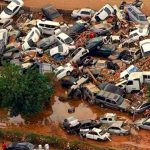 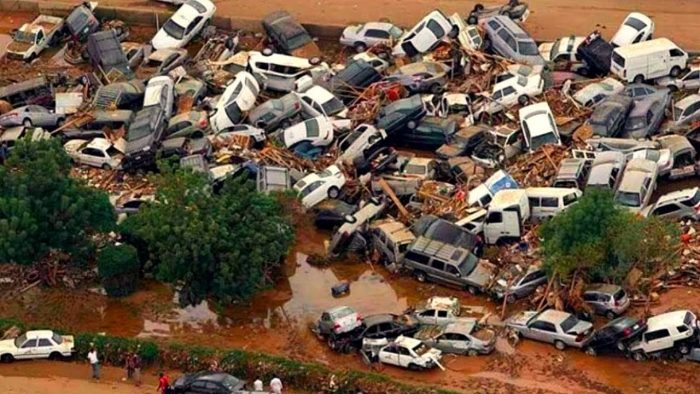 The catastrophic flooding in Iran continues to spread across the country, with 30 out of 31 provinces affected by flood conditions, according to the regime’s Relief and Rescue Organization. Reports from MEK sources inside Iran indicate that the victims of the disaster in many areas have been left stranded without access to emergency aid, drinking water, and supplies, and the death toll continues to climb.

National cooperation and popular assistance are the only way to prevail over the ruinous floods and the clerical regime’s destructive policies. #Iran#IranFlood

On Tuesday, Mrs. Maryam Rajavi, President-elect of the National Council of Resistance of Iran (NCRI), called on the people of Iran to organize to provide assistance to people who have been neglected by the regime in the wake of the deadly floods.

“I call on the people of Iran and especially the youth to form popular councils in every city, neighborhood, and village to confront the flash floods and their disastrous consequences, and to help the people who have suffered in the floods.”

She added: “National cooperation and popular assistance are the only way to prevail over the ruinous floods and the clerical regime’s destructive policies.”

March 25 – Shiraz, south-central #Iran
More footage of floods and civilians left without any sign of authorities providing emergency aid.
More signs of the mullahs bringing nothing but #40YearsOfFailure to this country. #IranFlood #IranRegimeChangepic.twitter.com/pRJp1IdIzZ https://t.co/uvXuTqH3kR

The city of Shiraz, Fars Province, has been the hardest hit by the floods, with at least 120 deaths reported by MEK sources and others inside Iran as of Monday. Shiraz flooded again on Tuesday, washing away more vehicles from the city’s streets.

#IRANFLOOD has reached #Tehran
Piroozi, a neighbourhood in east Tehran
No sign of regime authorities providing any aid. pic.twitter.com/fMMcKIu5Bu

Water levels are rising on some of Tehran’s roads, and the weather organization has warned that the city is under serious threat of flooding.

According to the Traffic Police Chief of Eastern Tehran Province, the Imam Reza highway has been blocked due to floodwaters.
Merchants in a number of areas of Tehran have been asked to close their stores for the next 48 hours due to hazardous flood conditions.

The Alvand River is rising near the city of Sarpol Zahab, Kermanshah Province. Sarpol Zahab was leveled by an earthquake in November 2017, and the residents of the city have struggled to rebuild with little to no assistance from the regime. Floodwaters have now washed many of their tents and trailer homes away.

According to the provincial Crisis Management Director, 350 homes in Isfahan, Khuzestan Province, have suffered damage from the floods.

According to the mayor of Ahvaz, Khuzestan Province, the entire city is in the midst of a flood crisis. The Karun River does not have the capacity to sustain the massive amount of water pouring through it, and the city will face problems.

Residents in two districts in Khuzestan have been ordered to evacuate due to dangerous conditions following flooding in Izeh. Reports from the province indicate that the Behbahan-Ramhormoz is closed due to flooding.

In Khorramshahr, Khuzestan Province, floodwaters have been reported near the Tavijat military road, and there is a possibility that the water may reach homes in the area. Locals are attempting to flood-proof their homes without any assistance from regime authorities.

Water levels in Dezful, Khuzestan Province, are rising, and a provincial authority has reported that flood conditions have reached dams in this city as well.

#IRANFLOOD
Tuesday, March 26
After many years, the water of #Zayanderood (the most prominent river in #Isfahan) reached the base of Si-o-se-pol bridge (one of #Iran's antiquities).
The water rose up to the edge of the Zayanderood border park. pic.twitter.com/ngTbyeHASZ

In Isfahan, Isfahan Province, the Zayandeh River has risen to the tip of the city’s bridges. Reports indicate that water is heading toward the city.

Early Tuesday morning floodwaters blocked a road between the city of Andika to Shahr-e Kord. A number of paths in the area were also blocked by floodwaters, according to local officials.

In Khorramabad, Lorestan Province, flooding continues. All roads leading to the city of Mamulan are blocked due to rising levels in the Kashkan River. The city is without drinking water as of Tuesday.

Landslides have been reported on the Ahrom-Kalame road in Bushehr Province. Iran’s nuclear power plant is located in Bushehr.

The Traffic Police Deputy of Southern Khorasan Province reported that the Eshq Abad road to Bardaskan near the city of Tabas is now closed “due to rising water levels.”

In the city of Zanjan, commuters were required to stop their vehicles because of the threat of flooding. Afshar, Zanjan Province, has already been hit by flash flooding.

Golestan Province was one of the first areas hit by the floods in Iran, and citizens are outraged at the regime’s failure to provide emergency aid. Revolutionary Guards forces attempting to enter the flood zone were met with outrage, as residents refused them entry into their homes.

Reports also indicate that authorities have refused to allow a team of physicians to enter Khaje Nafas to provide medical care.

According to reports, a boat capsized in Gomishan, Golestan Province, causing twenty passengers to drown to death. Locals were able to save five or six of the boat’s passengers. The MEK expressed condolences to the victims’ families.

In Kurdistan, five dams have flooded, and several more are on high-alert. Water levels in the province’s areas continue to rise, and warnings should be issued to people living near potential flood zones.

MEK supporters are mobilizing on the ground in Iran to provide relief for flood victims and their families.