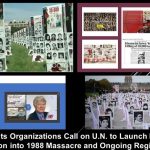 The statement refers to the ongoing crimes against humanity perpetrated by the regime, noting that the fatwa against the MEK issued by Ruhollah Khomeini was never rescinded.

On September 14, 21 human rights organizations issued a joint statement to the U.N. General Assembly calling for a full investigation into the 1988 Massacre of 30,000 political prisoners members and supporters of the People’s Mojahedin Organization of Iran (PMOI / MEK Iran). The statement further urged the U.N. and its member states to hold the perpetrators of this crime against humanity responsible for their actions during the 1988 Massacre and the regime’s ongoing human rights abuses, specifically the recent killing of protesters.

The statement briefly describes the mass execution of 30,000 MEK members that occurred during the summer of 1988 based on a fatwa issued by regime founder Ruhollah Khomeini. All MEK political prisoners in Iran—some of whom had already completed their sentences and were awaiting release—were brought before three-member Death Commissions and executed in groups after trials that lasted only minutes. The bodies were then buried in unmarked mass graves.

The Rt. Hon David Jones MP said, “The UK, France, and Germany are mistaken in their adherence to the flawed nuclear deal…

On July 17, 2020, U.S. State Department Spokesperson Morgan Ortagus recognized the forthcoming anniversary of the 1988 Massacre and spoke of the need for the perpetrators to be held accountable. “The United States calls on the international community to conduct independent investigations and to provide accountability and justice for the victims of these horrendous violations of human rights organized by the Iranian regime,” she said.

Amnesty International carried out its own investigation into the 1988 Massacre and has urged the U.N. to investigate the crime in order to bring the perpetrators to justice.

Some U.N. officials have called for an independent investigation into the 1988 Massacre. In 2017, Asma Jahangir, the previous Special Rapporteur on the situation of human rights in the Islamic Republic of Iran, told the General Assembly, “Over the years, a high number of reports have been issued about the 1988 massacres.

If the number of persons who disappeared and were executed can be disputed, overwhelming evidence shows that thousands of persons were summarily killed. Recently, these killings have been acknowledged by some at the highest levels of the State. The families of the victims have a right to know the truth about these events and the fate of their loved ones without risking reprisal. They have the right to a remedy, which includes the right to an effective investigation of the facts and public disclosure of the truth; and the right to reparation.”

On March 9, 2018, Zeid Ra’ad, U.N. High Commissioner for Human Rights, addressed a group of NGOs, saying, “The 1988 massacre, the allegations of the massacres in 88, the summary executions and enforced disappearances of thousands of political prisoners – men, women, and children – we have received a great deal of information from you. … And the recommendations have been made to the national authorities to investigate independently and impartially of course given all the attention given to this by the victims’ families.”

The statement refers to the ongoing crimes against humanity perpetrated by the regime, noting that the fatwa against the MEK issued by Ruhollah Khomeini was never rescinded. Former Death Commissioner and current Advisor to the Judiciary Chief Mostafa Pour-Mohammadi said in an interview last year that MEK activists would face the death penalty.

2. How many children did Iran execute in the last year? Why does Iran have the highest rate (per capita) of child executions in the world? Is it true that your government killed 23 children last November? If not, what happened to them? #QuestionsforZarif pic.twitter.com/jVafwWcaCV

The statement also described the crackdown on protesters in Iran since November 2019. More than 1,500 protesters were killed during the November 2019 protests and more than 12,000 were arrested. The statement quoted numerous news sources, regime officials, as well as U.N. officials on the treatment of protesters in Iran. The detainees face torture and execution, they are deprived access to legal representation before trial, and they lack basic sanitation and healthcare while in prison.

The statement stresses that there is no statute of limitations on crimes against humanity, that evidence is still available, and survivors are still alive. The perpetrators of the massacre are also alive and working at the highest levels of the Iranian government and judiciary, and Khomeini’s fatwa against MEK members is still active.

.@DavidJonesMP: I stress that the UK should support the reimposition of sanctions on the regime and an international inquiry into the #1988Massacre of 30,000 political prisoners in Iran. #FreeIran2020 #StopExecutionsinIranhttps://t.co/sRFWFztbCJ

The statement ends by restating its call for independent investigations into the 1988 Massacre and the recent deaths of protesters. It asks the Human Rights Council “to take urgent action to end the impunity enjoyed by Iranian officials and prevent the massacre of detained protesters. Leaders of the Iranian government must face justice for committing crimes against humanity in the recent massive suppression and bloodshed.”

Mrs. Maryam Rajavi the President-elect of the National Council of Resistance of Iran’s (NCRI): The clerical regime’s crimes climaxed during the mass executions in 1981 and the massacre in 1988. Today, these crimes continue to be perpetrated by the executions of protesters such as Mostafa Salehi and Navid Afkari.