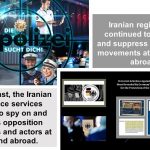 Iranian Regime has Continued to Monitor and Suppress Opposition Movements at Home and Abroad, Especially those Associated With MEK

Written by Mohsen Aboutalebi on September 2, 2020. Posted in NEWS 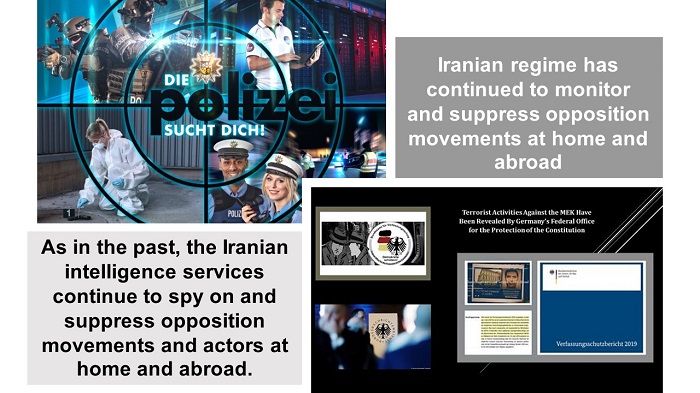 The Iranian regime has continued to monitor and suppress opposition movements (PMOI / MEK Iran), at home and abroad.

On 21 August 2020 Germany’s Department for the Protection of the Constitution, Bundesamt für Verfassungsschutz (BfV), presented the “Situation Report of the Protection of the Constitution 2019“, their latest annual report. Their findings show that the Iranian regime has continued to monitor and suppress opposition movements at home and abroad, especially those associated with the People’s Mojahedin Organization of Iran (PMOI / MEK Iran).

The report addressed this: “As in the past, the Iranian intelligence services continue to spy on and suppress opposition movements, The National Council of Resistance of Iran (NCRI) and (PMOI / MEK Iran)and actors at home and abroad. In addition, the services gather political, military, industrial, and scientific intelligence in Western countries. The main organization behind activities targeting Germany continues to be the Ministry of Intelligence (VAJA, usually rendered as MOIS). As well as MOIS, the Quds Force, a special intelligence unit of the Iranian Revolutionary Guards, is active in Germany.”

The failed bomb plot by the Iranian regime against the National Council of Resistance of Iran (NCRI) was also highlighted in the report. The failed plot was planned for the annual “Free Iran” event, a massive Iranian resistance gathering, in Paris on 30 June 2018 and led to the arrest of the regime’s supposed “diplomat” Asadollah Assadi. This was the first time in Europe that a diplomat has been put on trial for direct terrorist involvement.

The BFV report implied that the #Iranian regime must target the #PMOI #MEK its main opposition movement in order to avoid its probable downfall. This has all been brought about by the regime’s counter-productive policies in #Iran #FreeIran2020 https://t.co/6asmyKSxFY @USAdarFarsi pic.twitter.com/vVXZVScGTy

The report stated: “As reported in the 2018 Annual Report on the Protection of the Constitution, on 1 July 2018, a diplomat accredited with the Iranian Embassy in Vienna was arrested in Germany on a European arrest warrant issued by the Belgian law enforcement authorities.

The diplomat, a suspected MOIS agent, is accused of masterminding a planned bombing of an annual gathering in France of the People’s Mojahedin Organization of Iran (MEK, Mujahedeen-e-Khalq) in Villepinte, near Paris, on 30 June 2018. The Iranian diplomat is thought to have recruited a Belgian husband and wife of Iranian origin as agents to carry out the bombing. The suspect was extradited to Belgium in early October 2018.”

“In response to this planned attack, on 8 January 2019, the EU placed a division of MOIS, the Iranian diplomat accused of masterminding the attack, and a former MOIS deputy minister, on the EU terrorist list. In its decision, the Foreign Affairs Council stated that the above-mentioned persons and agencies were involved in terrorist activities,” added the report.

Iranian communities demand to blacklist the Ministry of Intelligence and Security (MOIS) and the Revolutionary Guards (IRGC), especially after the foiled terrorist attack on the Iranian opposition gathering in Paris on June 30th of this year#ExpelIranDiplomatTerrorists@BfV_Bund pic.twitter.com/ffWnujZtiy

Mahan Air airline, affiliated with the Revolutionary Guards (IRGC), which has been accused of participation in terrorism due to its key role in transferring weapons to Syria, was also noted in the report: “In addition, on 21 January 2019, the Federal Government suspended the license of Iranian airline Mahan Air to operate flights to and from Germany. This measure was a response to the airline’s operations in the Syrian war zone and to Iran’s espionage activities.”

The report also analyzed the cyber activities that the regime uses against the MEK and the NCRI: “Iran’s potential to carry out cyber operations has increased significantly in recent years, leading to increased activity of Iranian hackers against targets in the country and abroad. The primary targets are in the administration and government, business, science and research, and dissident and opposition groups.”

The report substantiates that the Iranian regime’s secret services are repeatedly carrying out oppressive activities, such as spying and terrorism. Their targets for this being Iranian dissidents and opposition movements, with the MEK and NCRI being the focus of these offenses. Measures must be taken moving forward in order to wipe out terrorism in Germany, shaped by the Iranian regime. The regime’s German embassy must be closed, as this is a center for terrorism and Islamic fundamentalism, and agents of the regime should be forced to leave Germany.

NCRI urges #Germany to shut down #Iran regime’s embassy in Berlin which is now a key terror hub. This after the Federal Prosecutors Office says the BfV domestic security agency is carrying out major probe into 10 Iranian spies https://t.co/AEmg4CsP16 @RegSprecher @GermanyDiplo pic.twitter.com/tU3FavsCzi