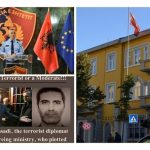 Written by Esmail Mohades on July 5, 2020. Posted in NEWS

It was on July 1st, 2018 when Assadollah Assadi, an Iranian diplomat based in Vienna, was taken into custody by German police for plotting to bomb the annual rally of the National Council of Resistance of Iran (NCRI) in Paris. He is still in prison. Iran’s state-run Keyhan newspaper reported this news and was not happy that Assadi was still in prison.

Ali Majedi, who used to be the regime’s ambassador for Germany, said that events like the one that Assadi was imprisoned for have made Iran unpopular in Europe because it is not to be trusted. He said Iranians who plot terrorist activities outside their own country are doing no favors at all for Iran but just allowing the country to get a bad name.

Assadollah Assadi played the role of Iran’s chief intelligence officer while working in Vienna. One of his jobs was to supervise acts of espionage and terrorism against members and supporters of the MEK. There is also evidence to show that over at least the last decade he played a vital role in the Iranian regime’s assassinations, espionage, and killings outside Iran.

Now, Assadi has been charged with terrorism in Belgium when he provided an Iranian couple with 500 grams of TATP explosives which they were supposed to use as a bomb. Fortunately, the action was foiled, so did not take place.

Before Asadollah Assadi played this role in Europe, Mostafa Roudaki was designated the same role. He was the Iranian regime’s Ministry of Intelligence and Security MOIS station chief in the regime’s embassy in Austria. Roudaki was eventually sent back to Tehran and in 2017 he was sent to Albania where his role was the MOIS station chief. It was using this position that he plotted against MEK members in Ashraf 3.

Regime plots against the MEK

The officers responsible for the failed bomb plot against the Free Iran rally were those who were members of the regime’s Supreme National Security Council. This involved the Iranian regime President, Hassan Rouhani, and Foreign Minister Mohammad Javad Zarif, who decided on this measure. Supreme Leader, Ali Khamenei, aided and abetted the plot and gave it the green light.

Authorities from the U.S. took on the responsibility of arresting two MOIS agents who were charged with spying on MEK members and supporters.

Yet again in 2019, Gholamhossein Mohammadnia, Iran’s ambassador to Albania, and Mostafa Roudaki, the Intelligence Ministry’s (MOIS) station chief in Albania, were expelled by the Albanian authorities for preparing terrorist plots against Ashraf 3 and MEK members.

Currently, two other arrested terrorists will be tried in Belgium for their roles in the attack on the “Free Iran Gathering 2018.” They were Antwerp residents called Amir Sadoni and Nassim Nomeni.

All that can be said about these terrorist attacks and planned assaults on the MEK is that it shows the MEK is greatly feared by the regime as a likely replacement to their tyrannical role which is probably going to take place very soon if the protests and demonstrations in Iran are anything to go by.