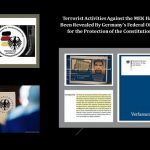 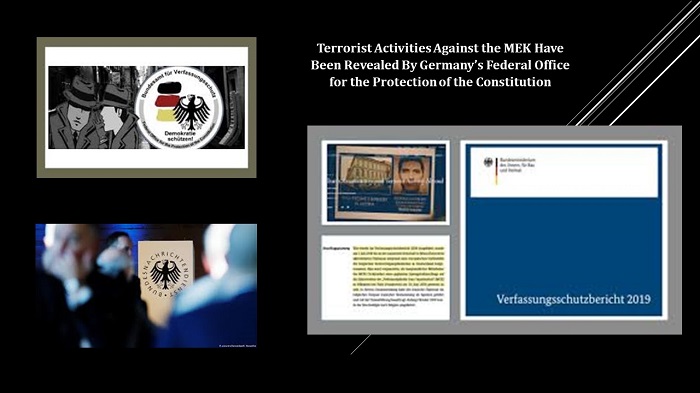 The BFV report implied that the regime must target the (PMOI / MEK Iran) its main opposition movement in order to avoid its probable downfall.

Some of the comments that were made were related to the Iranian Embassy in Vienna when an arrest warrant was issued by Belgian law enforcers for the arrest of a suspected MOIS agent who was accused of being the key planner behind the bombing of the yearly gathering in France of an organization that was opposed to the current Iranian regime (PMOI / MEK Iran). It was believed that the Iranian diplomat recruited a Belgian husband and wife of Iranian origin who were prepared to carry out the bombing. The German judicial authorities extradited the suspect to Belgium in early October 2018. The GBA’s investigation in Germany continues, as does the investigation in Belgium.”

Today, EU issued its first sanctions against the Iranian regime since the Iran deal, and the Netherlands disclosed that #Iran directed the assassinations of two Dutch nationals in 2015 and 2017. This follows Denmark and France foiling two Iranian terrorist attacks in 2018. pic.twitter.com/tz7U4pTLh8

The name of the regime’s terrorist diplomat is Asadollah Assadi, who was taken into custody in July 2018 when caught attempting to bomb the yearly “Free Iran” event in Paris of the National Council of Resistance of Iran (NCRI). Thousands of Iranians, (PMOI / MEK Iran) supporters, and many important politicians and Members of Parliaments from both sides of the Atlantic were in attendance at this event.

The NCRI believed at the time that it was key officials from the Iranian regime that supported this foiled act of terrorism.

The report issued by the BFV about the Iranian regime’s terrorism activities suggests that European countries are not taking the matter seriously enough.

It is not only what has been going on abroad that is an issue, but the regime’s oppressive measures against the MEK’s supporters inside Iran. The NCRI issued a statement in this regard which wrote: “The Iranian regime’s Ministry of Intelligence and Security (MOIS) and the Judiciary have begun to arrest and issue prison sentences for the supporters and families of the People’s Mojahedin Organization of Iran (PMOI / MEK Iran) and those who have signed the statement of incarcerated and released prisoners. The desperate effort comes after the failure of the anti – MEK slanders and a fake petition signed by 8,000 so-called families of the MEK members and on the eve of the Iranian Resistance’s Free Iran Global Summit in solidarity with the Iranian people’s uprising.”

The BFV report implied that the regime must target the (PMOI / MEK Iran) its main opposition movement in order to avoid its probable downfall. This has all been brought about by the regime’s counter-productive policies in Iran.

The regime seriously believes by oppressing its opposition it will prevent its downfall but the Iranian Resistance (PMOI / MEK Iran) annual “Free Iran Global Summit” on July 17th proves that the resistance movement is strong and not only has the support of the international community but the Iranian people as well as its struggles for freedom and democracy in Iran.