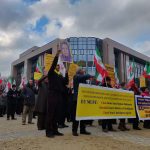 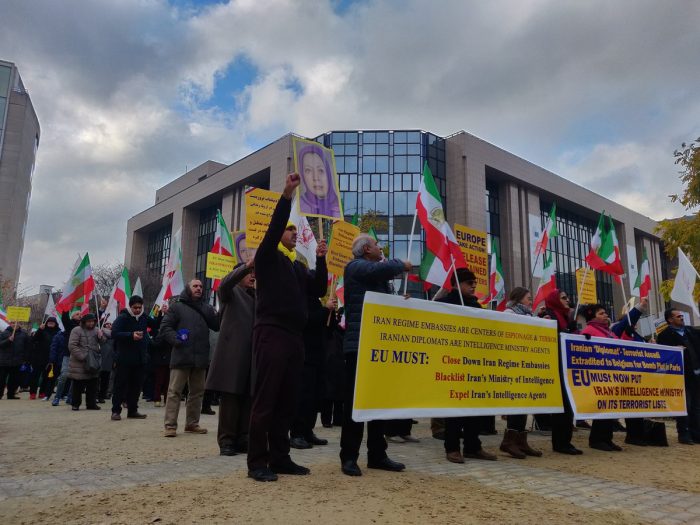 Supporters of MEK, hold a rally in front of the European Parliament in Brussels-November 2018

2018 was a disastrous year for the Iranian regime. Widespread protests weakened the mullahs’ already tenuous grip on power; the United States withdrew from the 2015 Iran nuclear deal, worsening an already calamitous economic climate within Iran and signaling a radical shift in the old Western policy of appeasement toward the mullahs; and the European Union continued that shift by placing two senior regime Ministry of Intelligence and Security (MOIS) agents on the EU terror blacklist, as well as imposing sanctions on the MOIS.

The regime has spent a great deal of time and effort attempting to preserve the EU’s policies of appeasement toward the mullahs since the U.S. withdrew from the Iran nuclear deal. Now that the regime is seeing the consequences of its foiled terrorist plots against the MEK on European soil, the reactions by regime officials are unsurprising.

Regime Foreign Minister Mohammad Javad Zarif responded to the EU blacklisting with hostility and in a bid to divert the attention away from regime’s terrorist activities, tweeting, “Accusing Iran won’t absolve Europe of responsibility for harboring terrorists.” Zarif was referring to the MEK, whose members reside peacefully in countries across Europe. The blacklisted MOIS agents were both involved in terrorist plots against the MEK on European soil.

Iranian regime MP Alireza Rahimi in an unwanted acknowledgment of MEK’s support among Politicians in Europe claimed that European leaders had been infiltrated by the MEK and urged Zarif to warn all of the regime’s European ambassadors about this diplomatic attack on Iran.

Rahimi said: “It is necessary for the Foreign Ministry to summon the ambassadors of Denmark and the Netherlands, and provide necessary explanations in this regard, demanding they not allow a number of extremist European states to damage or downgrade relations with Iran…”

Threats to Withdraw from the Nuclear Deal

Hossein Amir Abdollahian, Parliamentary Director General for International Affairs and Assistant to Speaker of the regime Parliament Ali Larijani, one of the regime henchmen who has been involved in suppressing MEK dissidents in Camp Ashraf, made perhaps the most startling statement admitting regime’s fear of  the opposition, when he tweeted that Iran might withdraw from the Iran nuclear deal entirely.

He tweeted: “Having strong relations w/ #Europe is part of #Iran foreign policy’s logics. But West should face a ‘shock’ to realize we won’t remain in one-way tunnel of the current #JCPOA at any cost. Now, safe Europe for #terrorists & #MEK has to get a logical, prudent but shocking message.”

The Iranian regime and its agents were foiled for terrorist activities against the MEK last year in Albania, Paris, the United States, and Norway. Asadollah Assadi, a regime diplomat, is currently awaiting trial in Belgium for masterminding a foiled terrorist attack on the annual gathering of the Iranian Resistance in Paris last June.

Mrs. Maryam Rajavi, President-elect of the Iranian opposition, tweeted this about the need to expel the regime’s diplomats:

“I would like to once again reiterate –on behalf of a Resistance movement which has been seeking the oil and arms embargo of the mullahs’ theocracy since 1981—the need for taking the following steps, [including recognition of the Iranian people’s right to overthrow the Regime and expelling the mullahs’ terrorist diplomats from other countries.”