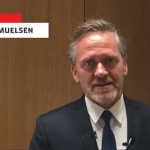 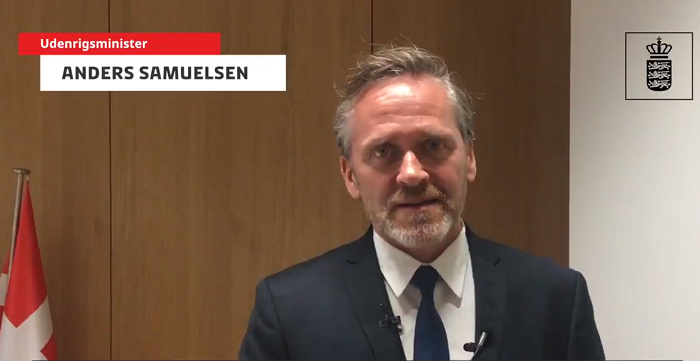 The Denish Foreign Minister, Anders Samuelsen, speaks to the press after the meeting of the EU Ministers, unanimously agreeing in sanctioning, part of the Iranian regime’s Ministry of Intelligence (MOIS) for its involvement in terrorist activities in European soil.

On Tuesday, Danish Foreign Minister Anders Samuelsen announced the imposition of sanctions against two Iranian regime diplomats. The two diplomats were sanctioned for their roles in orchestrating terrorist plots in Europe.

Important day for European Foreign Policy! EU just agreed to enact sanctions against an Iranian Intelligence Service for its assassination plots on European soil. Strong signal from the EU that we will not accept such behavior in Europe.

Samuelson named the regime diplomats as Deputy Minister and Director General of Intelligence Saeid Hashemi Moghadam and Vienna-based diplomat Asadollah Assadi. Assadi is currently jailed in Belgium awaiting trial for masterminding a foiled terrorist attack on the annual National Council of Resistance of Iran (NCRI) gathering in Paris last year. Assadi was targeting the tens of thousands of MEK members who attended the event.

.@DanishMFA @AndersSamuelsen with other #EU Foreign Ministers decided to include a division of #Iran's Min.of Intelligence (MOIS) on the EU terrorist list. At the same time, 2persons from MOIS are included on the terrorist list,one is Hashemi Moghadam #ExpelIranDiplomatTerrorists pic.twitter.com/g9tVG98Tw3

The sanctions by the Danish government follow the recent expulsion of three regime diplomats from Albania. On December 19, 2018, Albania’s Foreign Ministry announced that it had made the decision to expel the diplomats for “violating their diplomatic status” and posing a threat to national security.

Today, EU issued its first sanctions against the Iranian regime since the Iran deal, and the Netherlands disclosed that #Iran directed the assassinations of two Dutch nationals in 2015 and 2017. This follows Denmark and France foiling two Iranian terrorist attacks in 2018. pic.twitter.com/tz7U4pTLh8

The sanctions by the Danish government are a welcome and long-overdue response to the regime’s continued terrorist acts on European soil. The mullahs have acted without consequences for the entirety of their reign, and it is time that they are held to account for their actions. Imposing sanctions on and expelling regime diplomats is a good way to start this process, but it must be followed by blacklisting the Ministry of Intelligence and Security (MOIS) and the Islamic Revolutionary Guards Corps (IRGC), trying the regime’s intelligence agents and mercenaries in courts of law, and expelling them from their host countries.

The MEK has spent the last three decades emphasizing that the regime’s embassies and its foreign ministry are a part of its terrorist mechanism. Finally, the international community is beginning to abandon the policy of appeasement toward the mullahs and accept the reality that the Iranian regime is a terrorist theocracy that must be dealt with in a firm manner.

In its July 2017 report, the German Federal Office for the Protection of the Constitution (BfV) wrote: “The official headquarters of the Ministry of Intelligence at the Iranian Embassy in Berlin has an important role in the secret service’s reconnaissance. In addition to conducting independent intelligence operations, these headquarters support activities conducted by the Ministry of Intelligence in Tehran. These operations are mainly against targets in Germany and, in some cases, against individuals or facilities in other European countries.”

The MEK recommends that the European Union implement the following measures to prevent the Iranian regime from engaging in terrorist acts in Europe: