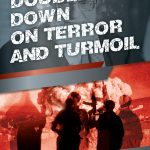 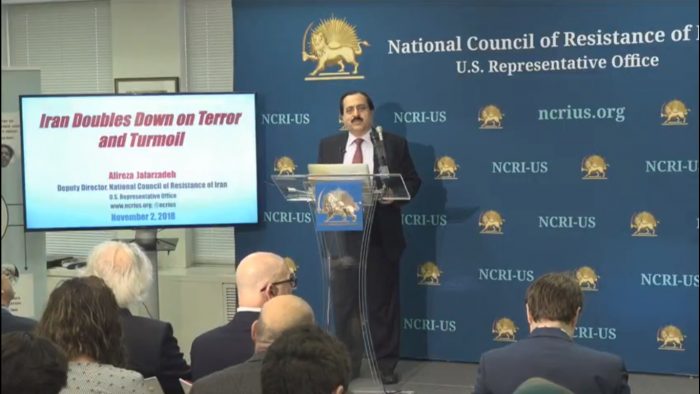 The National Council of Resistance of Iran (NCRI)- US office, introduces the new book “Iran double downs on terror and turmoil” in a press briefing in Washington D.C. at NCRI-US office- November 2, 2018

On Friday, November 2nd, the deputy director of the National Council of Resistance of Iran (NCRI), Alireza Jafarzedah, held a press conference in Washington DC ahead of the release of the new book entitled “Iran Doubles Down on Terror and Turmoil”. In the conference, he outlined the Iranian regime’s decision-making, planning, and execution of terror attacks abroad. 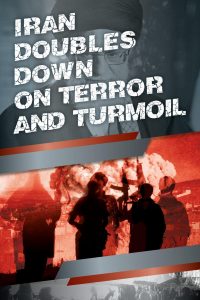 He also explored strategies for confronting the regime’s network of terror and detailed what the international community can do to prevent Iranian state-sponsored terror attacks occurring.

A Surge in State-Sponsored Terror Attacks

However, in the first 11 months of 2018, Tehran has planned and attempted to carry out no less than eight terror plots on US and European soil.

Several of the most high-profile attacks included an attack in March against the People’s Mujahedin Organisation of Iran (MEK) in Albania. The regime’s Ministry of Intelligence (MOIS) planned to detonate a truck bomb during the MEK’s Nowruz (Persian New Year) celebrations.

Three months later, the regime’s MOIS coordinated an attack on the MEK’s annual grand gathering event in Paris. More than 100,000 members of the Iranian resistance and their supporters attended the event, including delegations of prominent politicians from the US and Europe.

The plan was foiled when two MOIS agents were arrested. The pair had entered Albania under the guise of reporters. The president-elect of the Iranian resistance,  Maryam Rajavi, was present at the event, as was the former mayor of New York and lawyer to President Trump, Rudy Giuliani.

Jafarzedah detailed the MEK’s findings that a regime diplomat based at the Iranian embassy in Vienna provided a Belgian-Iranian couple with the explosive matter. The couple was instructed to detonate a car laden with explosives at the annual event.

The diplomat, Assadollah Assadi, was the MOIS station-chief in Vienna and responsible for coordinating terror attacks across Europe. Assadi was arrested by German authorities, the couple was detained whilst traveling in a car to the event in Paris armed with the explosives. Disaster was narrowly averted.

In response to the failed attack, the French government froze MOIS assets and expelled an Iranian diplomat from Paris over their involvement in the attack’s planning.

One thing is clear about #IranTerror surge: NO ROGUE TERRORIST OPERATIONS. Evidence show that Supreme Leader @khamenei_ir & @HassanRouhani were involved. 4 diplomats were implicated; 4 major terror plots in 6 months in 2018; that is one plot every 6 weeks in Europe & U.S.! pic.twitter.com/MNgc3LwCG3

Another plot was foiled in the US. Two Iranian regime agents were arrested in August. The pair had been monitoring the MEK with the intention of carrying out a “capture/kill” operation against MEK members.

Jafarzedah concluded that these plots were not rogue operations. He cited evidence that indicates the highest levels of the Iranian leadership were involved in the plots. 4 diplomats were implicated, based in three different countries. It is unfathomable to think that the Iranian leadership, including Hassan Rouhani and the Supreme Leader Khamenei, was not involved in the plots’ coordination.

Based on the MEK’s findings, Jafarzedah described how the Iranian Supreme National Security Council, headed by President Hassan Rouhani, coordinates terror attacks with the assistance of the heads of MOIS, IRGC Intelligence, Qods Forces and the Intelligence Coordination Council.

So, why is the regime ratcheting up its terror attacks now? Jafarzedah asserted that it is because of the increasing popularity and effectiveness of the MEK in Iran.

Why #terrorism surge against dissidents particularly the MEK? It is the uprising which is threatening the regime survival in Iran; The uprising has continued, spread, expanded & #MEK network acts as the engine for change. some 120,000 MEK members have been executed since 1981. pic.twitter.com/wFAGqAkDwb

Over the past 10 months, MEK-organised protests have broken out across 142 Iranian cities and hit many of Iran’s major sectors. The protests have also taken a far stronger anti-regime tone. Protestors’ slogans have centered on a rejection of the regime and its authoritarian and repressive ideologies.

Jafarzedah said that the terror attacks were a sign of the regime’s “utter desperation” in the face of mounting pressures both internally and externally.

First and foremost, Jafarzedah recommended that all the regime agents be prosecuted under the full weight of US and European law.

Secondly, the US and European governments must expel all Iranian terrorist diplomats and shut down Iranian embassies in Europe. The involvement of several diplomats in the planning and coordination indicate that Iranian diplomatic activities must be put under the microscope.

The MEK has repeatedly asserted that Iranian embassies make up a barely-concealed espionage web through which the regime can plot terror attacks. It is only through shutting down these embassies that the regime’s nefarious activities can be stymied.

Finally, Jafarzedah asserted that international sanctions must be levied against the Iranian regime. By constricting the flow of money to the regime, the international community can end the regime’s financing and training of international terror groups.

Is the International Community Warming to the Idea?

However, following the recent terror plots on European soil, including the Paris and Denmark attacks, the European community has warmed to the idea of possible sanctions.

Fox News reported that the Danish government is now calling for economic sanctions against Tehran. When the idea was floated at a meeting of EU ambassadors on Wednesday, eight countries, including France and the UK expressed support for the idea.

The Danish Prime Minister, Lars Lokke Rasmussen, expressed his pleasure. “I appreciate the support from my colleague Theresa May today. In close collaboration with [the] UK and other countries, we will stand up to Iran”, he said after a meeting with his counterpart from the UK.

US Secretary of State Mike Pompeo said that his government stands with the European heads of state to end the regime’s assassination attempts on European soil.

Pompeo said, “that kind of behavior needs to stop, and we have offered our support and effort to help the Europeans in preventing these kinds of assassination attempts from taking place”.

here is what to do to confront Iran's #Terrorism pic.twitter.com/6Mii9ZfgcF

The MEK had suggested that in the face of increased regime terror attacks, the European community should begin to rethink its policy of “appeasement” with the Iranian regime. At the Friday press conference, Jafarzedeh said, “they [European governments] now have to look at these realities in a totally different light”.

The summer of 2018 could mark a turning point in international policy towards the Iranian regime. Should the European governments end their decades-long policy of appeasement towards the mullahs, they will find themselves under even more pressure.