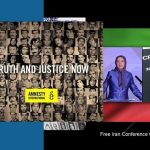 Most of the 30,000 political prisoners were either members or supporters of the (PMOI / MEK Iran).

Family members of the victims of the 1988 massacre of MEK members in Iranian prisons gathered in Khavaran at a mass grave which has been there for 32 years since the crime took place. The families are still demanding justice for the devastating way they lost their loved ones.

Most of the 30,000 political prisoners were either members or supporters of the People’s Mojahedin Organization of Iran (PMOI / MEK Iran) which has been the main opposition group since the 1979 Iranian revolution which ousted the Shah.

In the summer of 1988, the Iranian regime committed a heinous crime and massacred 30,000 political prisoners, the…

Death Commissions responsible for the massacre

The Supreme Leader at the time of the massacre, Ruhollah Khomeini, announced a fatwa which brought about the formation of the “Death Commissions” which had the role of identifying any prisoner who did not support the regime but was committed to the MEK. These were then executed with no trial. Hossein-Ali Montazeri, who had been earmarked as Khomeini’s successor admitted that it was “the worst crime of the Islamic Republic.”

Apart from never being held accountable for the 1988 massacre, those who were directly involved in committing the crime 32 years are still key government officials such as Ebrahim Raisi, as the Judiciary Chief, and Alireza Avaei, holding the Minister of Justice position. In November 2019, the regime enforced a brutal crackdown on the protests which took place included killing at least 1500 protesters.

The international community has failed to take these crimes seriously, despite the MEK providing documents that show Khomeini issued the fatwa and interviews of survivors and observers to the 1988 massacre.

Mother of three protesters and resisting brothers pleas for everybody to help and stop executions of her sons by the Iranian mullahs @JavaidRehman @AgnesCallamard #StopExecutionsInIran #Navid_Afkari https://t.co/QcezAaUyCr

Yet the international community has failed to hold the regime to account for this crime against humanity due to the policy of appeasement. Enjoying this immunity, the regime has ever since continued its killing spree and brutal oppression of any dissent.

To prove that the regime is still carrying out human rights violations the judiciary has recently sentenced three brothers to be executed.  This is for the role they played in the Kazerun and Shiraz protests in 2018. Navid Afkari, a 27-year-old was a national wrestling champion was one of the ones to face executions.

Mrs. Maryam Rajavi, the president-elect of the National Council of Resistance of Iran (NCRI), urged the UN Secretary-General, High Commissioner for Human Rights, and Human Rights Council to stop the execution of Navid Afkari. There was another execution that has already taken place and that was Mostafa Salehi who was arrested at the 2018 protests.

I urge the @UN Secretary General, High Commissioner for Human Rights, and #HumanRights Council to immediately intervene to stop the execution of Navid Afkari. #StopExecutionsInIran

The international community has failed to address these terrorist crimes, which has meant they have continued unabated.

The United Nations General Assembly is about to take place and it is time the regime’s worst crimes at the 1988 massacre were discussed.

Abridged version of a report written by Mohammad Sadat Khansar, for the NCRI.