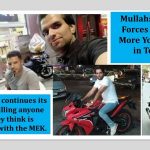 Written by Mohsen Aboutalebi on August 26, 2020. Posted in NEWS 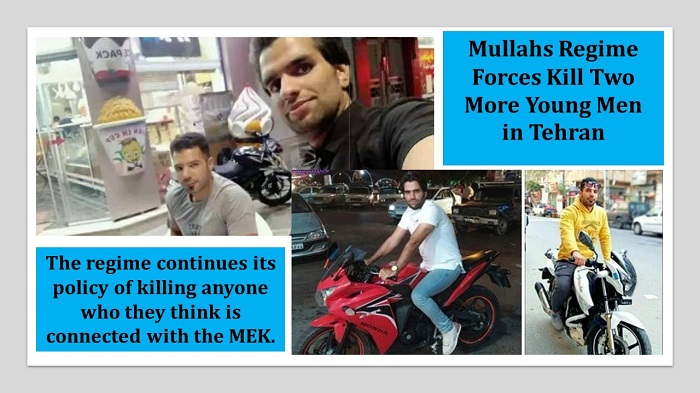 The regime continues its policy of killing anyone who they think is connected with the (PMOI / MEK Iran).

Iranian State Security Forces have killed two young men in Shahriar, 42 km west of Tehran. The two men, Alireza Jafarlou and Alireza Goudarzi were apparently killed for not showing their driving licenses. There is no other reason given for the killing, but Shahriar was hard hit when November 2019 uprising took place. It appears the regime is running scared of anyone who might appear to be a supporter of the resistance (PMOI / MEK Iran). It only knows oppression as a strategy, a strategy that is eventually going to be the undoing of the regime.

The Iranian regime’s state security forces shot and killed two young motorcyclists on Friday, August 21, in a town near the Iranian capital Tehran for the sole reason that they had not shown their driver’s licenses.#Iran#HumanRightshttps://t.co/ZQRgyEPcrd

The regime continues its policy of killing anyone who they think is connected with the MEK. Mostafa Salehi, arrested during the 2018 protests, was executed on August 8th. He was tortured before his execution. Eight other political prisoners had their execution put on hold due to a widespread and well-organized campaign calling on the regime to halt their execution.

Mrs. Maryam Rajavi, President-elect of the National Council of Resistance of Iran (NCRI), commented about the Salehi execution “reluctantly forced to refrain from executing eight other detained protesters subsequent to the millions-strong social media campaign calling for the halt in executions, the ruling religious fascism carried out this execution in retaliation and in order to terrorize the public and thwart the outbreak of an uprising.”

The reality is that the Iranian regime is in a mess. It faces widespread criticism, both in Iran and elsewhere, about its support for terrorism in Iraq, Lebanon, Syria, and Yemen. Its response to the Covid-19 outbreak, and its handling of the economy, have been blows to the regime. The killing of its terrorist-in-chief, Qassem Soleimani, and its international isolation have only added to the regime’s crisis.

Reports from #Iran indicate the regime’s State Security Forces (SSF) shot and killed two young men in Shahriar near Tehran. This action along with the regime’s recent executions, although tragic, show the mullahs’ fear of the society. #IranProtests https://t.co/wmiPjWRSjn

The regime has turned to state-sanctioned thuggery, as it is the only real tactic it knows. Even non-political prisoners, such as those who have been accused of taking alcohol, have been executed in Iran.

The increasingly desperate attempt by the Iranian regime to shore up its crumbling edifice by sheer force is turning Iran into a powder keg, ready to explode at any moment.

This is something that hasn’t gone without notice by the state-run media in Iran. The Etemad Online website recently (August 1st) published this article: “Uprisings are the product of crises in people’s living conditions. It is an unbearable situation that forces dissatisfied people to protest. In fact, people’s distrust of governing institutions is an essential factor in protests and uprisings.

People do not participate in protests for fun or entertainment; they take the risk to fight for a better life. In protest movements, the relations among the protesters is especially important. Social media provides these links in the best feasible way. But not to prevent them to go to the street, but to the contrary, to facilitate them to take to the streets.

Whether virtual or real, every act is an exercise in creating an autonomous space, preparing for collective action, and occupying the streets. Didn’t you see the protests of November 2019 just a few months ago?”